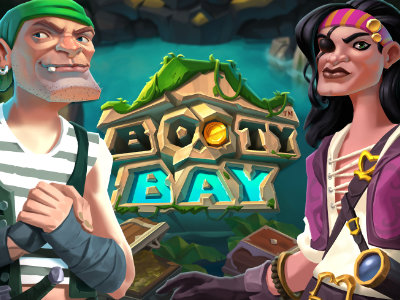 Prepare to set sail for the tropical cove of hidden plundered treasure in Push Gaming's Booty Bay. Playing on a 5 x 5 grid, Booty Bay uses the Cluster Pays mechanic along with a variety of wilds to win the maximum win of 20,000x your stake.

Aside from that, you can find progressive unlimited free spins and a treasure map to trigger one of six different wins. Unleash the pirate in you and become the captain of all the wins!

“ A swashbuckling adventure with some bountiful wins ”

There are loads of features in Booty Bay, and it all begins with the Booty Wild symbol. Naturally, this substitutes all other symbols but actually has a multiplier attached that is shown once a winner cluster is made with a wild attached.

The central part of the grid (3x3) triggers unlimited respins when at least one wild is inside and this is called the Hotzone.

Aside from that, the Swiling Rapids feature is triggered by landing the swirling rapids symbol anywhere on the reels. It activates a respin whether they have any Booty Wilds in the Hotzone or not. All wilds in the Hotzone increase by 1.

If you manage to land the treasure map symbol anywhere on the reel, you'll trigger the Treasure Map feature. You'll be shown 6 possible prizes all with different values and features. You could win cash prizes between 1 and 5,000x your stake, locking wilds, swirling rapids or even a booty wild.

Booty Bay features a Triple Wild Lock which is triggered by 3 booty wilds on the reels. All the booty wild symbols become locked in place for 3 respins and symbols outside the Hotzone remain unlocked. Locked wilds do not move and they increase their multiplier by one after every respin. 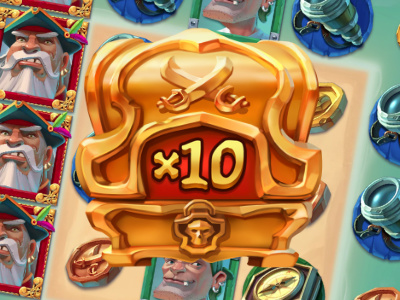 When at least one wild is inside the central part of the grid 3x3, the Hotzone is triggered. This activates unlimited respins that continues until there are no more wilds in the centre. 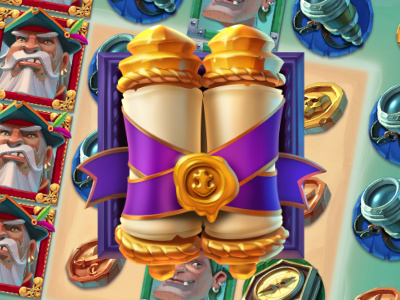 If you manage to land a treasure map symbol anywhere on the reels, then you'll activate the Treasure Map feature. Players will then have the option to decide between 6 different prizes.

Ahoy! It's time to set sail for the glorious Booty Bay to unlock unimaginable treasures. Developed by Push Gaming, this pirate slot plays on a grid of 5 x 5 with the Cluster Pays mechanic. Along the journey, you'll find unlimited respins, a treasure map and wilds that locked.

If that isn't enough, you can win up to 20,000x your stake on this high volatility slot! See if you can become the captain of all the treasure in Booty Bay.

Naturally, the slot is set at the luxurious Booty Bay with various pieces of the island scatter around with a treasure chest filled with gold. Alongside the treasure, there are pieces of a pirate ship all around with the main one in view in the distance. The water surrounding the reels is slightly animated but not too distracting.

Of course, all the symbols on the reels are inspired by pirate lore with various different chests and symbols relating to pirates. The design of the symbols is cartoonish and similar to the style of Sea of Thieves - but this is done well enough that it doesn't feel like a copy.

In terms of the music, there is no cliche jaunty music as there is instead a soft score. It features soft flutes and calming music instead of the typical over the top pirate sounds. It's subtle but effective and thankfully doesn't get too annoying.

As previously mentioned, Booty Bay uses the Cluster Pays mechanic on a grid of 5 x 5. Instead of the traditional payline, you match up at least 6 symbols horizontally or vertically to land a win.

Like in most Push Gaming slots, you can find all the menus at the bottom of the screen. There is the spin button to the far right with the autospin button next to it. Similarly, you can find the bet level and further menus to the left of this.

The maximum win for Booty Bay is 20,000x your stake, which can be won by increasing the multiplier from the Booty Wilds in the Hotzone. Aside from that, you can win up to 5,000x your stake during the Treasure Map feature as well.

As a high volatility slot, you can expect less frequent wins but high payouts when you do win. It also features a high RTP of 96.41% which is above the average and a great standard for online slots.

There's no denying that Booty Bay is a fun and goofy slot that embraces the cartoonish side of pirates without being childish. The use of Cluster Pays with a variety of features elevates the gameplay entirely.

Thankfully, the slot delivers with the win potential of 20,000x your stake as well - which is nothing to scoff at. If you love Cluster Pays and pirate slots, then Booty Bay is definitely worth a spin.

Play Booty Bay now at the following verified online slot sites. These slot sites have been thoroughly audited and reviewed by us to ensure they offer an exceptional user experience, are trustworthy, safe, secure, and boast the best variation of online slots in their portfolio including Booty Bay:-

Enjoyed Booty Bay? Here's a handful of similar slots we think you'll like too. These online slots have been chosen based on features and themes similar to Booty Bay. You might also want to check out other Push Gaming slots.