Annihilator is a 5-reel, 10 payline slot developed by Play'n GO that's based on the Canadian thrash metal band of the same name. This slot boasts 3 bonus features, wild reels and re-spins, a pick and click mini-game and a free spins feature that can see players collect up to 50 free spins! Like all of Play'n GO's branded rock games, this slot has a soundtrack of licensed songs from the band themselves!

“ This slot ramps up the rock with thrilling extras! ”

Annihilator follows on the Play ‘N Go rock series with plenty of heavy metal action on the reels. The game is jam-packed with extras, including some high paying symbols and generous bonus features.

The bonus games are all randomly triggered and reward generously, including the chance to land up to 50 free spins. Let’s take a look at what in-game bonus features you can enjoy in the Annihilator video slot. 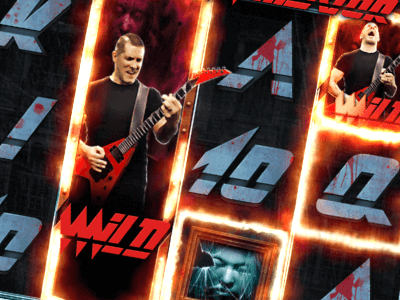 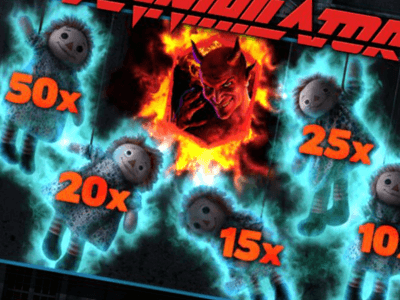 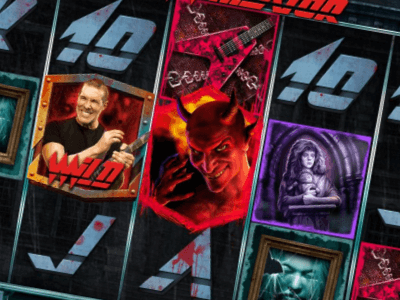 Set the World on Fire

This feature is triggered on the devil scatter landing on reels 1, 3 and 5. You get 8 free spins and also an expanded wild/wild reel on every spin. The wild reel moves before every spin, creating a trail of fire. A wild symbol landing on a highlighted symbol will transform into extra wilds. Landing the devils scatters adds 2 more free spins, up to 50 spins can be added.

Annihilator is one of many slot games in Play‘n Go’s ‘rock’ series, each slot is based on a heavy metal or rock band. This time the game follows the Canadian thrash metal band Annihilator, who formed in 1984. The action-heavy slot brings dark and dingy aesthetics and a heavy rock soundtrack together for some truly awesome gameplay. You don’t need to be a fan of the band to enjoy this Play‘n Go game.

The slot features the standard 5 reels and 3 rows, with 10 paylines. In true Play'n Go form, the game has some electric bonus features to trigger, including high paying wilds and a free spins game that can nab you up to 50 free spins, with the chance of capturing 400x your stake.

The game has a solid impact when it comes to its visual impact, as you would expect from the likes of Play'n Go. The game is set around a desolate house with some pretty haunting imagery on the reels.

The Annihilator slot has a sinister presentation and a heavy soundtrack that makes for some interesting slot entertainment. You won’t find any light colours and cartoony imagery in this game if that’s your thing.

The game is themed around one of Annihilator’s most famous songs “The Fun Palace”, which is anything but. The game is set outside a creepy mansion that looks very haunting, even for a slot game. The game matches up with the heavy soundtrack that’s provided by the band itself.

Annihilator has an eerie and dark presence on the reels, the game has some creepy symbols, including a walking doll, a broken mirror, a haunting reflection and a crying statue. There is also the lead guitarist who acts as the game's wild symbols. The symbols are all references to some of the classic songs from the heavy metal band.

As you play, the reels will light up when you land a wild reel, intensifying the slot play. The wild reel displays the band's lead singer rocking out on his guitar, pretty cool stuff! What’s impressive is the Fun Palace feature that takes you into the haunted house and you’re surrounded by scary dolls to pick from. The animation is first-rate, and it makes for a pretty awesome playing experience. Of course, it wouldn’t be a rock slot without a heavy metal soundtrack that coincides with the slot action.

Not a slot from the light-hearted, this slot is dark and sinister. Let’s just say that it will please fans of heavy metal rock!

The slot is played on the standard 5 reels and 3 rows, offering uncomplicated slot play. The game has the usual Play'n Go set up when it comes to the controls. The spin button is the brightest colour and on the control panel, you also have the auto spins button where you can set up to 100 spins. Then you have the betting range which can be set from £0.10 to £100, making Annihilator a suitable choice for casual players and high rollers. Then there is the information icon that provides info on the game symbols and slot features.

Annihilator has a 96.2% RTP which is around the standard range for a Play'n Go slot. The medium to high variance game has a top payout of 400x your stake, this is achieved during the free spins feature where up to 50 spins can be triggered. This game provides a top payout of £40,000.

The randomly triggered features are where the big rewards are and when all reels turn wild you will achieve some excellent rewards. Although it’s one of the lowest-paying games in the ‘rock’ series from Play'n Go, it still offers frequent and generous wins.

The Annihilator slot from industry giants Play'n Go is graphically rich and full of life, despite the dark and haunting theme. The game is bursting with features and the excitement levels are increased ten-fold when high paying action is triggered. The game has some rewarding features but the 400x maximum payout is low for Play'n Go standards. Overall, the game is packing some serious thrills through its rocking soundtrack and impressive visual quality.

Play Annihilator now at the following verified online slot sites. These slot sites have been thoroughly audited and reviewed by us to ensure they offer an exceptional user experience, are trustworthy, safe, secure, and boast the best variation of online slots in their portfolio including Annihilator:-

Enjoyed Annihilator? Here's a handful of similar slots we think you'll like too. These online slots have been chosen based on features and themes similar to Annihilator. You might also want to check out other Play'n GO slots.