Alice in Wonderland Deluxe is a truly bizarre 5-reel, 20 payline fairytale themed slot developed by Playtech. This slot is filled with tasty bonuses such as a lucrative free spins feature that sees sticky wilds come into play. That said, it's the huge progressive jackpot that players will truly want to land, especially with prizes that reach well into the hundreds of thousands.

“ Surreal and bizarre - Alice in Wonderland Deluxe deserves your attention ”

Jump straight into the action and play Alice in Wonderland Deluxe now at the following fully licenced UK slot sites. These slot sites have been thoroughly audited and reviewed by the team here at Slot Gods to ensure they offer an exceptional user experience, are trustworthy, safe, secure, and boast the best selection of online slots in their portfolio including Alice in Wonderland Deluxe...

Alice in Wonderland Deluxe has a truly bizarre set of bonus features that are pretty true to Lewis Caroll's strange and trippy original story. Firstly we have the Rabbit Hole Bonus, this is triggered whenever players land the Rabbit Hole scatter symbol on the third reel. Alice will tumble down a hole, the further she falls the larger the overall win (that will be between 7x and 20x the player's stake).

Secondly, we have the Pocket Watch Bonus, this is your typical free spins feature. Whenever players land three rabbit scatter symbols anywhere on the reels an animated rabbit will rush onto the screen with his pocket watch. The hands on the watch will spin and wherever it stops reveals how many free spins will receive (this will be between 7 and 20).

That's not all there is with this feature though! Before the free spins begin the rabbit will hop across the reels landing on between 3 and 5 symbols, this will turn a random number of them into sticky wilds for the duration of the feature.

The final bonus feature we want to bring to your attention is the Tea Party Bonus feature, the strangest of all three. When players land three Mad Hatter scatter symbols anywhere on the reels players will be asked to pick a guest to serve tea. The more tea you serve to the guest, the higher your overall prize will be.

Once one guest is served you'll move onto another, they may decide they've had enough to drink or they'd like to be served more. If they do opt for more you prize will continue to rise (to a maximum of 1,000x your total stake).

If by chance you spot a spoon in the sugar bowl then the player will automatically trigger the progressive jackpot! 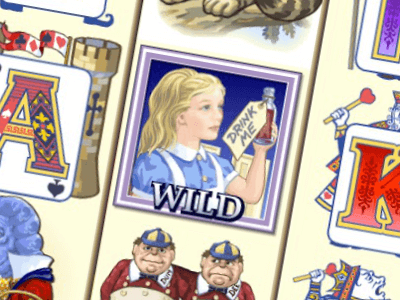 Land the Rabbit Hole scatter symbol on the third reel and Alice will fall down a rabbit hole collecting cash as she tumbles, the further she falls the larger the overall win. 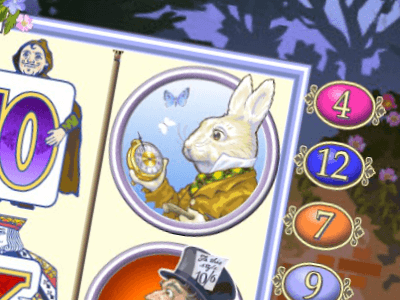 Land three rabbit scatter symbols and a rabbit will appear on screen with a pocket watch, the watch hands will spin to reveal how many free spins players get, which ranges from 7 to 20. This bonus also comes bundled with sticky wilds. 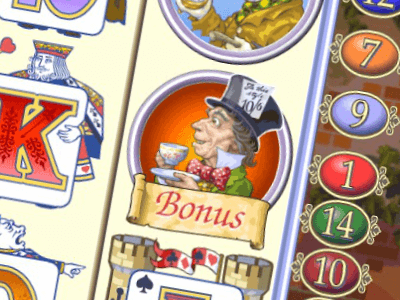 Land three mad Hatter scatters and players will have to play a bizarre mini-game in which they pick a guest to serve tea. Players must keep offering guests tea until they're satisfied. At the end players will receive a random cash prize. 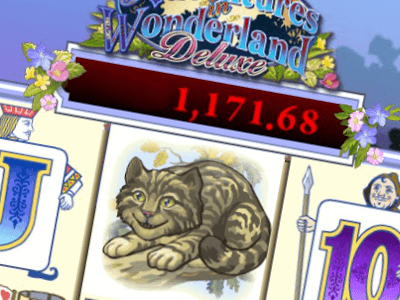 Alice in Wonderland Deluxe is a progressive jackpot slot that can see players win a minimum jackpot of £20,000 if they get lucky on the Tea Party bonus feature.

The genius team at Playtech have taken Lewis Carroll's classic tale of Alice in Wonderland and have transformed it into a memorable 5-reel, 20 payline progressive jackpot slot that plays host to a number of fantastic bonus features including free spins, random multipliers and pick and click mini-games.

Some might say Alice in Wonderland Deluxe looks incredibly dated, others might say it's wonderfully charming. For us, it falls somewhere in the middle... Yes, it doesn't really stand up to modern slots, however, it's a bold design that looks massively different to what slot enthusiasts are used to, and we applaud Playtech for that.

The reels are set upon a plain white background, which actually helps the colourful hand-drawn symbols to stand out and pop a little bit more. Behind the reels is a beautifully kept garden with lush grass and foliage growing up against a brick wall.

Low-paying symbols appear as your standard royal symbols, 10, J, Q, K, A whilst high-paying symbols are Tweedledum and Tweedledee, the Cheshire Cat and the Duchess, all characters from the classic fairytale.

Alice in Wonderland Deluxe is a quaint game, all the game buttons are along the bottom of the screen are made to look as if they're on little signs, whilst the middle section of the action bar is covered in flowers.

On the left-hand side players can bring up the game detail screen by pressing the info button, change the number of lines they're betting on and their total bet value.

On the right-hand side of the screen there's an autospin button (that allows players to make up to 99 automated spins), a turbo button and the spin button.

Finally, in the top left-hand corner of the game screen is a totaliser with the increasing progressive jackpot figure.

Players that opt to give Alice in Wonderland Deluxe a spin could potentially win a huge 10,000x their initial stake (which isn't terrible for a game released back in 2016) with just a single spin of the reels if their luck comes in and they fill the entire reel with Alice symbols.

Sadly, the RTP of this slot is seriously lacking, sitting at a meagre 88%, however, we can overlook this slightly because of the progressive jackpot that this game comes bundled with (which is seeded at £20,000).

Alice in Wonderland Deluxe threw us off a little bit if we're being completely honest! At first glance, we almost felt as if we shouldn't enjoy this slot because it looks so dated and nothing like we've seen before (maybe even a little bit too soft), but we quickly realised that's genuinely part of the game's overall charm.

We really didn't like the low RTP, even for a jackpot slot it certainly could have been higher, but the game manages to scrape some points back thanks to the features. There are some pretty nifty bonuses here that we genuinely found enjoyable.