Age of the Gods Goddess of Wisdom

Age of the Gods Goddess of Wisdom is a 5-reel, 20 payline slot developed by Playtech that has an innovative Battle Game free spins feature that gives players the opportunity to pick from three bonuses (Shield, Helmet and Armour) that each offer spins with different modifiers. This slot also features the Age of the Gods progressive jackpot.

“ An all-rounder that isn't spectacular but is still worth a spin or two! ”

Age of the Gods Goddess of Wisdom Features

When players land 3 or more scatter symbols anywhere on the game reels then they'll trigger the Battle Game bonus. Players are taken to a battleground in which the city is being attacked, in an attempt to salvage the battle players turn to the Athena for help.

She will offer players one of three choices, the shield, helmet or armour. Whichever one players pick will trigger a specific free spins bonus round, these are as follows:

Of course, Goddess of Wisdom comes bundled with the legendary Age of the Gods Progressive Jackpot that can see players win one of four lucrative progressive jackpots at any time, on any spin. 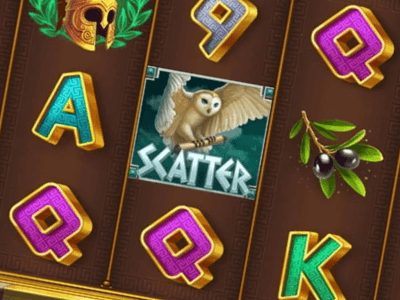 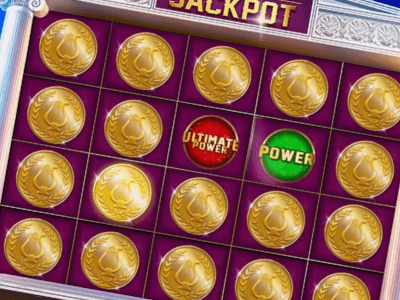 Players can trigger a pick and click mini-game that will see them trigger one of four Age ot the Gods Progressive Jackpots at any time during the base game or bonus round.

Age of the Gods Goddess of Wisdom

Age of the Gods Goddess of Wisdom is a 5-reel, 20 payline slot developed by Playtech that's all about the wisest Goddess in ancient Greek mythology, Athena. This progressive jackpot slot is centred around an innovative Battle Game feature that sees players offered one of three special free spin bonuses that can see them rack up huge riches.

This heavily themed slot looks great for a game that was released way back in 2016, which is a very long time in the iGaming world. The gold-trimmed reels are adorned with stylised symbols that are linked to Greek mythology.

Low paying symbols are your standard 9, 10, J, Q, K, A whilst high paying symbols are an olive branch, winged sandals (known as the Talaria of Mercury), a warrior's helmet, a warriors chest plate and a coin featuring the feared monstrous Gorgon. The game's scatter symbol is an owl, whilst the wild is the Goddess of Wisdom herself, Athena.

In terms of sound, players treated to a low-key soundtrack sounds nice enough, but it doesn't really get us overly-excited whilst spinning the reels. However, it does build up into an exciting crescendo when the bonus feature is triggered as is to be expected.

If you've read any of our other reviews of games in the Age of the Gods series then you'll most likely know what to expect here. This game, like almost all of the other classic Age of the Gods games, looks and plays practically the same as the next.

An action bar along the bottom of the reels features all the buttons that players need to play this slot. On the left-hand side there's an info button that displays all the key information about the slot including the paytable and bonus features details, next to that is the stake selection (that can see players select a stake between 0.01 and 100).

On the right-hand side of the slot players can set up to 99 automated spins and spin the reels manually using the SPIN button. above the reels players will find the four Age of the Gods Progressive Jackpot trackers, these show the current value of the Power Jackpot, Extra Power Jackpot, Super Power Jackpot and the Ultimate Power Jackpot.

This medium volatility slot has a slightly below-average RTP of 94.94%, but that's to be expected for a progressive jackpot slot such as this one, so we won't complain too much at all. Players can scoop up 5,000x their initial stake during the base game and can of course win in excess of £10,000,000 by way of the Age of the Gods Progressive Jackpot.

Age of the Gods Goddess of Wisdom isn't exactly jam-packed with bonus features and mechanics, but it's a good middle of the ground slot that's well worth a spin or two. As far as older slots go this is certainly one of the better ones which would have been a headliner back in its heyday.

Play Age of the Gods Goddess of Wisdom