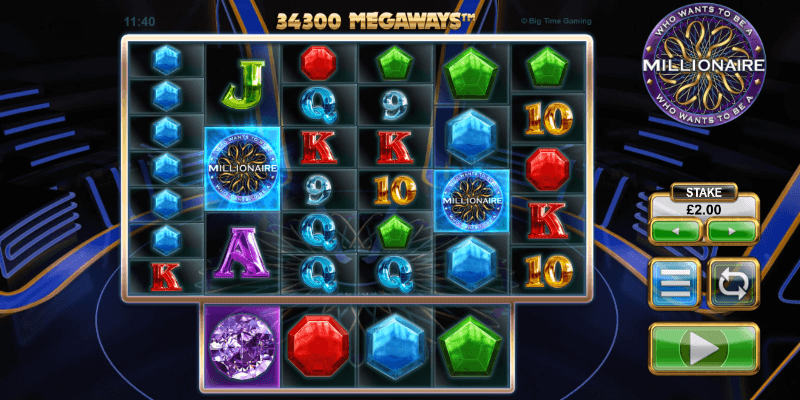 There’s nothing many of us enjoy more than settling down on the sofa after a long day at work to enjoy our favourite game shows on television, it might be something quintessentially British such as the Great British Bake Off or it could be something much more intense that has huge riches on the line, such as Who Wants to be Millionaire, The Chase or the Million Pound Drop.

It’s those huge riches that have inspired iGaming companies around the world to license these shows into their very own online slot games… And boy are they good! In this article, we’ve tried and tested some of the very best online slots based on real-life game shows.

Deal or No Deals Lightning Spins

For that reason, it comes as no surprise that Blueprint have this year opted to make the most of their Deal or No Deal license to bolster the launch of their latest slot mechanic, Deal or No Deal Lightning Spins.

Released in August 2020, this 5-reel, 20 payline slot sees players go head-to-head with the banker in an attempt to get their hands on cash prizes and big bonuses by the way of successful spins and selecting the correct 22 red mystery boxes.

If you’re scratching your head wondering what Lightning Spins™ actually are, they're special spins that are activated when six or more Lightning Spin Scatter symbols land on the reels any time during normal gameplay. Players are then given a minimum of three free spins to win lucrative prizes, and potentially win one of the four in-game progressive jackpots.

As we alluded to, there are a lot of Deal or No Deal themed casino games you could sink your teeth into, but of all the options we’d recommend Deal or No Deal Lightning Spins.

The 100k Drop is an online slot created by Red Tiger Gaming that’s based on the hit show of the same name hosted by Davina McCall. Some of you might remember the original game show being called ‘The Million Pound Drop’ or ‘The Million Dollar Drop’ if you’re in the states.

The game delivers absolutely everything you could hope for in an online slot based around a real-life game show. It has flashy graphics, excellent bonus features and enough excitement to keep you entertained for some while.

The crown jewel of this 5-reel, 20 payline slot is its heart-stopping 100k drop bonus game which is triggered when players land three bonus symbols anywhere on the reels.

The studio lights flash dramatically and you’re thrown into the spotlight, tasked with distributing a set amount of money (depending on your initial stake) across four trapdoors.

Once you’ve confirmed where you want your money to go… All but one of the trapdoors will drop and you’ll lose some of your winnings. You then have to use the remaining cash to play in the next round… You must get through four incredibly intense rounds to keep any of the money.

It certainly feels like one of the most difficult bonus games we’ve played, but it’s also one of the most exciting! You truly feel like you’re part of the real-life game show with so much at stake.

Who Wants to be a Millionaire Megaways

Who Wants to be a Millionaire is a game show so famous and synonymous with television fans around the globe that it’s led to huge multi-award winning movies… So it makes sense that the iGaming world would put their money on an online slot based on the show being a success.

Who Wants to be a Millionaire Megaways, created by Big Time Gaming, is the studios first-ever branded Megaways slot. This epic game boasts an impressive 117,649 paylines, innovative cascading reels and a maximum winning potential of 50,000x so it’s not hard to see why players have flocked towards this game.

The game features a number of fantastic bonus rounds and mechanics such as Mystery Stacks, re-spins, and a free spin round that initially hands players 8 free spins, however, you can bravely gamble in an attempt to win an incredibly generous 50 free spins.

We have to admit, Triple Spin Extreme! is quite an unusual looking game, utilising a 3 x 4 x 5 x 4 x 3 reel setup akin to NetEnt classic Jumanji. It might look different to what most players are used to, but it’s still an incredibly enjoyable title.

As the name suggests the main feature of this exciting new slot is the Triple Extreme Spin Bonus feature that will see you tasked with picking envelopes (just like in the show!). Each envelope awards you a pointer for either the blue, red, or yellow wheel.

It’s a slightly confusing mechanic, but each of these wheels have 3 pointers, and any selected pointers after the first 3 for a particular wheel pay a predetermined amount. The maximum a player can win from this bonus is 2,919x your initial stake, which doesn’t sound bad to us!

In addition to the Triple Extreme Spin bonus, if you can land 3 or more scatter symbols anywhere on the reels during normal play and you’ll unlock the Mini Wheel Bonus feature.

The symbols that triggered will feature then turn into three wheels that all begin spinning simultaneously. Once all wheels have stopped on values they’re added together and multiplied by the total stake to determine a payout for the player.