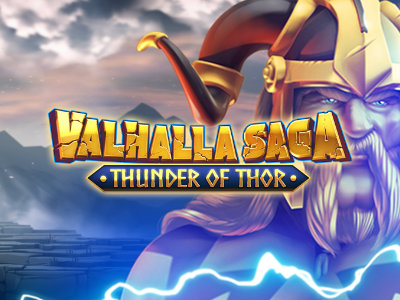 Prepare yourself for an epic Norse adventure unlike any other with the first of a three-part epic. Developed by Jelly with Yggdrasil, Valhalla Saga: Thunder of Thor is a mythical slot that plays on 5-reels with 20 paylines.

You'll be able to trigger Thunder of Thor, Free Spins or multipliers leading up to wins of 10,000x your stake! Join in this mythical adventure and see if you have what it takes to beat the God of thunder.

“ This is no Thor-dinary slot ”

During gameplay, you can trigger Thunder of Thor at any moment which creates wild symbols on the reels. These feature multipliers of either x2, x5, x10, x25, x50 or x100!

When you land 5 or more scatters on the reels, you'll activate 5 free spins with PowerLinks. The triggering positions are special reel zones that guarantee payouts when the feature ends with each new scatter landing in that zone increasing the payout.

Ultimately, the PowerLinks can guarantee a win of sorts and upgrade the ones that are there. 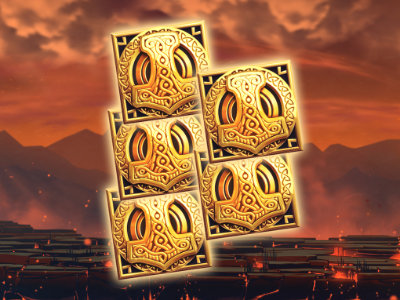 You can trigger free spins by landing 5 or more scatters on the reels. With PowerLinks, you are guaranteed to win a cash prize and even have the chance to upgrade them. 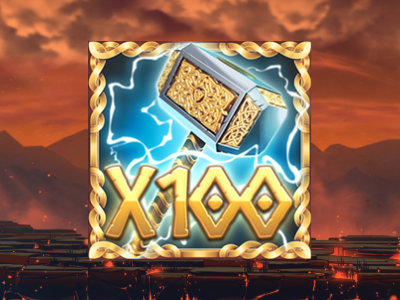 During any moment during gameplay, you can trigger Thunder of Thor which adds wilds to the reels. You can find multipliers of up to x100 on these wilds.

It's time for a new set of Norse heroes and Jelly have delivered with Valhalla Saga: Thunder of Thor. As the first in the series, this mythical slot plays on 5-reels with 20 paylines and focuses on the Norse God of Thunder.

Released as part of Yggdrasil's Masters' Programme, Valhalla Saga: Thunder of Thor is the first of many to come with a focus on the PowerLinks mechanic which is triggered during free spins. If you want a new epic adventure, then you are in the right place.

The setting of this slot looks quite barren from the offset, as there are only stones and trees with no leaves. This all changes during free spins as the sky is set on fire and all of the reels are covered in flames. Sadly, there is no real animation throughout this apart from the lightning occasionally which is disappointing.

All of the symbols are related to Norse mythology with longboats, axes, alcoholic beverages and Thor himself. During free spins, he shows it on the title screen but that's about it.

As for music, it's just as epic as you'd expect with loud drums and stringed instruments creating something colossal which pairs well with the lightning sounds that play throughout spins.

Whilst this slot may boast about PowerLinks, there's not a whole lot to the gameplay. Ultimately, PowerLinks just guarantees that you'll gain a payout throughout spins and that they can be upgraded by the end of the feature.

The interface is clean with all the relevant menus at the bottom of the screen. You'll find the spin button, bet level, sound and general paytable settings right here.

It's no surprise that this slot features high volatility gameplay which essentially means that you often win higher amounts but less often. You can even win an impressive 10,000x your stake with the multipliers and the free spins round.

Sadly, the RTP is a huge letdown with a mediocre 95.90% which is under the average standard of 96%. Of course, we recommend that you play something with 96% and above unless there's a jackpot attached.

Valhalla Saga: Thunder of Thor is a mighty opening for the series, but it's definitely not perfect. Whilst the visuals are decent enough, there isn't anything special that deviates it from any other slot, plus the lack of animations in the background makes it feel lifeless. The gameplay is lively enough with the modifier overshadowing the PowerLinks feature massively.

Now, the maximum payout is incredible - but the RTP will leave players feeling a little bit cheated by it being lower than the average standard. Valhalla Saga: Thunder of Thor is definitely worth a spin to see what it's all about, but we're hoping the little issues in this slot will be fixed in the sequel.