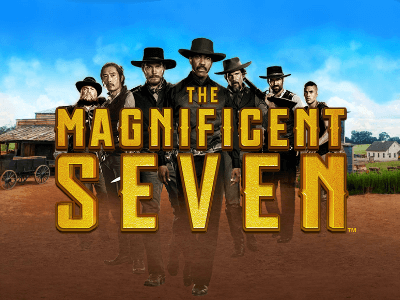 If that isn't enough, then what about 80,000x your stake as the maximum win. That's not all as there is even a glorious progressive jackpot in the game as well.

“ Unlike the film, The Magnificent Seven slot is one not to miss ”

Jump straight into the action and play The Magnificent Seven now at the following fully licenced UK slot sites. These slot sites have been thoroughly audited and reviewed by the team here at Slot Gods to ensure they offer an exceptional user experience, are trustworthy, safe, secure, and boast the best selection of online slots in their portfolio including The Magnificent Seven...

During any spin, if you land a fully stacked character symbol on reel 4 and with the bonus on-screen, you’ll activate one of the special features. As there are 7 heroes, there are naturally 7 different features that you can unlock. 6 of these features are different free spins options, and these include: Landing Joshua Faraday will trigger the lucky gambler bonus where you pick cards until you reveal the 3 of hearts. You can win multipliers and the king of hearts will trigger a win of 7x your bet. Landing fully stacked symbols of each of the characters on the 7 reels will activate The Magnificent Seven Jackpot. The jackpot is progressive and growing every minute, so the win could be life-changing!

As the slot opens, you get a cinematic that shows you the best scenes from the movie. All the main characters are introduced and explain exactly how they are going to help you. The designs of the character look just like the actors themselves but with a cell-shaded style instead to fit better with the design of the slot.

Just like the film, the background of the reels is the American frontier town of Rose Creek. There are homesteads and typical farmery images associated with the frontier to create an atmosphere that fits in well with the slot.

Underlying the slots is a western score straight from the movie to simulate the feeling of the wild west. The best part is that it plays in between spins as well making the environment feel better. Thankfully, the music isn’t too loud or annoying, so players will most definitely enjoy it.

Despite playing on 7-reels, The Magnificent Seven slot is completely traditional in gameplay. There are 40 paylines meaning that there are still loads of chances to win but without a complicated number. Features themselves are simple and are fully explained once they happen, so players will have nothing to worry about.

The bottom left of the reels features the payline and bet level for the slot. The far right contains the spin and autospin button. You can find the jackpot at the top of the reels and it is a progressive jackpot that grows with each spin.

There is a low RTP at 94% but this is due to the progressive jackpot. The slot itself is a medium to high volatility slot which means that you can expect higher payouts but less frequently.

The maximum base win is 5,000x your stake by the 7 wilds which can be multiplied by the Warrior Free Games by 16x meaning that you could win up to 80,000x your stake. Of course, there is a progressive jackpot in the slot that means the maximum win could be life changing with this.

For a TV/Movie branded slot, The Magnificent Seven is pretty impressive. The visuals match well with the film whilst bringing something new and the same goes for the aesthetic. It’s absolutely mind-blowing that there are 7 main features from the characters with 6 of them being free spins.

If that wasn’t enough for players, then perhaps the progressive jackpot will satisfy players. Honestly, for a slot based on such a mediocre film, Skywind sure turned it around. Unlike the film, The Magnificent Seven slot is one not to miss.

Play The Magnificent Seven now at the following verified UK slots sites. These slot sites are fully licenced and have been thoroughly vetted and reviewed by us to ensure they offer a great user experience, are trustworthy, secure, and have a wide variety of the best online slots in their lobbies including The Magnificent Seven:-