Sonic Reels is an ultra-modern 6-reel, 729 payline slot developed by Wazdan that sees players in with the chance of winning a maximum of 5,400x their initial stake. This feature-filled music theme slot has wilds, free spins, two speaker bonus features and the ability to gamble their winnings for bigger prizes.

“ Sonic Reels is a true joy to the senses, if you're an audiophile you HAVE to play this engaging slot game ”

Jump straight into the action and play Sonic Reels now at the following fully licenced UK slot sites. These slot sites have been thoroughly audited and reviewed by the team here at Slot Gods to ensure they offer an exceptional user experience, are trustworthy, safe, secure, and boast the best selection of online slots in their portfolio including Sonic Reels...

If players collect 5 left speaker symbols then they'll activate the left speaker bonus that sees the reels move one position to the right, bringing new symbols into play after each and every win. Each win sees a win multiplier increase by one up to a maximum of 5x.

If players collect 5 right speaker symbols then they'll activate the right speaker bonus that sees the reels move one position to the left, bringing new symbols into play after each and every win. Each win sees a win multiplier increase by one up to a maximum of 5x.

Landing any of the speaker symbols during either speaker bonus round can see the bonus continue, with an increased bonus counter value.

The other feature in Sonic Reels players should be aware of is the game's free spin feature. This is fairly standard in comparison to everything else though. When players land 3, 4, 5 or 6 scatter symbols on the reels they'll receive 10, 15, 20 or 25 free spins respectively. 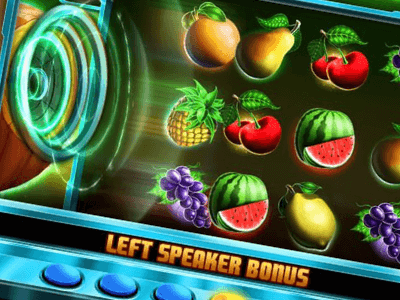 If players collect 5 left speaker symbols then they'll activate the left speaker bonus that sees the reels move one position to the right, bringing new symbols into play after each win. 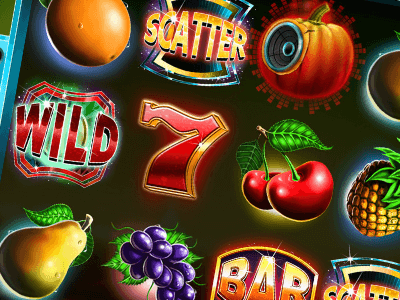 When players land 3, 4, 5 or 6 scatter symbols on the reels they'll receive 10, 15, 20 or 25 free spins respectively. This feature can be triggered again if more scatters land during the bonus. 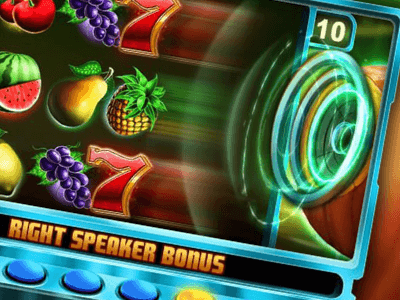 If players collect 5 right speaker symbols then they'll activate the right speaker bonus that sees the reels move one position to the left, bringing new symbols into play after each win.

Sonic Reels is a futuristic 6-reel, 729 ways to win music-themed slot developed by Wazdan that brings together a classic fruit machine with an ultra-modern video slot. This game boasts two speaker bonuses, a free spins round and a thrilling gamble feature.

Quite frankly we find Sonic Reels a little bit bizarre, when its release was first announced, Wazdan described this slot as 'a retro-style slot with a big focus on high-quality audiovisuals, giving players immersion into a DJ experience unlike any other' and to be fair, we think they've managed to pull this off, but not without a few raised eyebrows.

The game is set on what is either a dancefloor or in space, it's a pretty trippy experience with bright vibrant colours and patterns moving around behind the reels. The game itself is played on what looks like an old fashioned fruit machine cabinet, to reaffirm this, all of the symbols mimic those you'd find on a classic fruit machine.

It's the pumpkins that we're really confused about, either side of the reels there are two large pumpkins (that match the symbols) with speakers built into them, they come into play during the bonuses and are pretty important.

It'd be wrong of us not to take some time to talk about the music in this vibrant slot, as it's the main focal points. Wazdan has described Sonic Reels as a slot that delivers pumping beats and big wins to players who like their music loud, and that's fair to say, this slot is best played with a good pair of headphones.

A fantastic selection of dance music plays whilst the reels are spun and whenever the left speaker bonus or right speaker bonus is triggered, players will hear sounds directly into the specific earphone that matches the speaker in-game, which really is truly unique.

On one hand, this slot seems a little bit all over the place with regards to what it wants to be, but on the other hand, when you view this slot purely from an audio perspective, it's up there amongst the very best, and we have to applaud Wazdan for that.

Wazdan has designed this slot to look exactly like an old-school fruit machine cabinet, so all of the buttons that would normally be on the game's action bar are where they might be on a fruit machine.

Players can access all of the game settings and the paytable on the far left-hand side (next to a red feature buy button). On the right side of the controls players can set the game's volatility (chilli peppers represent volatility here), they can also change the game speed, set up to 1000 automated spins and spin the reels manually.

There are two meters on either side of the reels that indicate how many pumpkin speaker symbols are needed to trigger the speaker bonuses and a multiplier meter on the very top of the reels.

Sonic Reels has a pretty average RTP of 96.24% and a maximum win potential of 5,400x the player's initial stake. It's nothing groundbreaking, but considering this slot allows players can change the volatility of this slot manually to low, medium or high we really can't complain.

Any slot that gives us the freedom of choice to change how frequently this slot pays gets a big thumbs up from us, as it has a bearing on win potential.

At first you look at Sonic Reels and you feel a little bit confused and overwhelmed by it all, it's confusing to say the least. But give it a while and spin the reels a few times and you'll start get a real feel for what this game is about.

It goes without saying that the game's soundtrack is fantastic and really helped solidify this slot as something worth playing. The left and right speaker bonus features genuinely really impressed us well, especially considering it utilised audio panning when playing with headphones.

Play Sonic Reels now at the following verified UK slots sites. These slot sites are fully licenced and have been thoroughly vetted and reviewed by us to ensure they offer a great user experience, are trustworthy, secure, and have a wide variety of the best online slots in their lobbies including Sonic Reels:-

Enjoyed Sonic Reels? Here's a handful of similar slots we think you'll like too. These online slots have been chosen based on features and themes similar to Sonic Reels. You might also want to check out other Wazdan slots.