Cruise aboard a Viking ship and meet the greatest Norse Gods in Hall of Gods. Developed by NetEnt, it’s a 5-reel, 3-row slot with 20 paylines available to win.

In this title, you’ll get the chance to win all the riches from the Vikings with one of their progressive jackpots. With free spins, wilds and multipliers, you’ll be uncovering your own treasure in no time.

Jump straight into the action and play Hall of Gods now at the following fully licenced UK slot sites. These slot sites have been thoroughly audited and reviewed by the team here at Slot Gods to ensure they offer an exceptional user experience, are trustworthy, safe, secure, and boast the best selection of online slots in their portfolio including Hall of Gods...

Hall of Gods gives you many chances to win in this Viking themed slot. Of course, all the symbols and décor is inspired by Norse mythology and Viking lore. The lowest ranked symbols include typical Norse items such as Thor’s hammer and Viking apples.

Naturally, the highest ranked symbols are the Gods themselves. Odin is the highest paying symbol in the base game with the potential of reaching 4,000x your bet, and Idun is the lowest with 150x your stake.

When you spin 3 or more scatter symbols, you’ll activate the free spins round. Landing 3 will get you 10 free spins, 4 will get you 15 and 5 will give you 20 free spins. With the chance to win free spins and expanding wilds, you’ll be reaching the Hall of Gods Jackpot in no time. There are 3 progressive jackpots to be won - Mini Jackpot, Midi Jackpot and the Mega Jackpot. 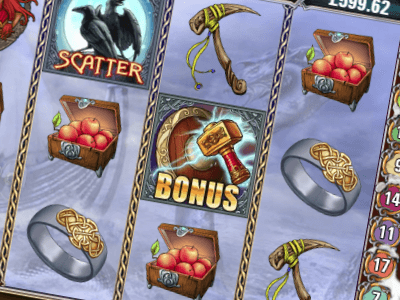 There are three progressive jackpots to be won. They can be activated when 3 bonus symbols landed on the reels and trigger the bonus game. The chance to win a jackpot correlates with the jackpot size and the bet size. 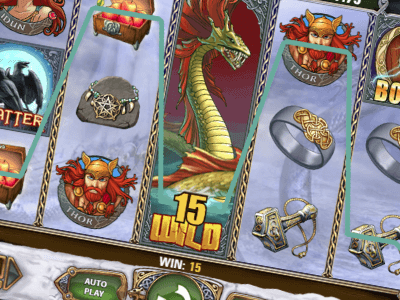 Landing on 2, 3 and 4, the wild symbols expand to cover the entire reel when completing winning bet lines. They can substitute any symbol except for the scatter and bonus symbols. 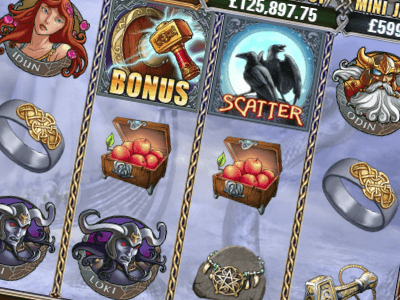 Spinning 3 or more scatter symbols will activate the free spins mode. Up to 20 free spins can be won from the base game with the chance to win additional free spins during free spins. They also pay 3x, so you can win even more.

The ancient Norse Gods have decided to bless you with the chance to win big. Developed by NetEnt, Hall of Gods is a Viking themed slot that plays on 5-reels and 20 paylines for the chance to win one of their progressive jackpots.

Not only can you win on the jackpot, but you can win extra with free spins and multipliers. Expect Viking ships, weapons and all your favourite Gods to help you procure the heavenly cash prize.

It’s set amongst the seas with the ocean filling up the bottom of your screen. The background of the reels features a Viking ship fighting a water dragon named Jörmungandr. Whilst this may be a small detail, it shows that the developers put extra effort into making this authentic.

Symbols on the reels feature drawings of the Norse Gods but done tastefully. It can be easy to put them as over the top, but they are understated for a more subtle approach.

Forget annoying sounds and songs in online slots because Hall of Gods features none of that. You are met with the sounds of crashing waves whilst you are waiting to spin. Whilst you are spinning, there is a note played by a violin to keep up suspense but nothing too much. When you win on certain reels, they come alive and make noises but it never got too annoying in which you need to mute it.

The menus are designed to fit in with the style, but they are easy to find. They stand out at the bottom of your screen with the buttons clearly labelled. The spin and autospin buttons are centred in the middle giving you easy access. Like most NetEnt games, you have the option to go up to 1,000 autospins if you desire to do so.

Of course, you can win one of three jackpots in this game and naturally that takes down the RTP. It’s at a measly 95.70% which is under the average standard but to be expected in a slot with a jackpot.

You do have extra ways to win with the free spins round which could give you some mighty cash prizes that multiply. If you don’t win the jackpot, you could always win up to 4,000x your stake by rolling 5 Odins.

Thankfully, the volatility level is low to medium, so it’s a lower risk game with frequent small payouts. If you budget well, you could sustain your gameplay for a reasonable amount of time with some great wins.

Overall, Hall of Gods is an exciting addition to the Viking genre. You have even have extra features such as free spins and expanding wilds to give you more help in winning. With a low to medium volatility level as well, Hall of Gods is perfect for newcomers and veterans.

For a joyful experience of playing a Viking slot matched with fair gameplay and a fantastic design - try out Hall of Gods.

Play Hall of Gods now at the following verified UK slots sites. These slot sites are fully licenced and have been thoroughly vetted and reviewed by us to ensure they offer a great user experience, are trustworthy, secure, and have a wide variety of the best online slots in their lobbies including Hall of Gods:-

Enjoyed Hall of Gods? Here's a handful of similar slots we think you'll like too. These online slots have been chosen based on features and themes similar to Hall of Gods. You might also want to check out other NetEnt slots.