Golden Macaque is a 5-reel, 243 payline slot developed by Rare Stone that's based on the Chinese Zodiac. This epic slot comes with free spins and a hugely lucrative re-spin feature that can see players potentially win up to 2,000x their stake.

Jump straight into the action and play Golden Macaque now at the following fully licenced UK slot sites. These slot sites have been thoroughly audited and reviewed by the team here at Slot Gods to ensure they offer an exceptional user experience, are trustworthy, safe, secure, and boast the best selection of online slots in their portfolio including Golden Macaque...

“ This Zodiac themed game certainly has the ability to bring prosperity and luck! ”

If players land 3 or more scatter symbols they'll trigger the Gong feature, a second screen will appear featuring 4 gongs. Players must pick one gong that will award players one of two bonus features, these are either 6 standard free spins or the Fire Blaze Respin feature.

The other way the Fire Blaze Respins feature can be triggered is by having between 6 and 15 drum symbols land on the reels. This awards players with 3 respins.

Any drum symbols that land on the reels triggering the feature are held in position for the duration of the feature. Each unheld symbol will spin independently on its own. Each drum symbol that appears will reveal a cash prize or a star icon.

Any star revealed will transform to award players one of three jackpots, the major mini or mini prizes. If a Golden Macaque symbol lands it will transform to reveal a prize equal to the sum of all prizes displayed on the reels at that time.

The jackpots are structured as follows:

After each respin, if there's one or more new drum. golden macaque or star symbols on the reels they will be held and the number of respins will be reset to 3.

The grand prize is awarded during the feature when all symbol positions are filled with drum, star or golden macaque symbols. 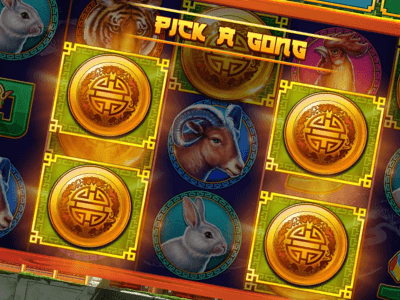 If players land 3 or more scatter symbols they'll trigger the Gong feature, a second screen will appear featuring 4 gongs. Players must pick one gong that will award players one of two bonus features. 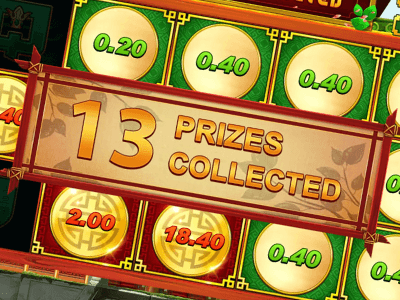 The Fire Blaze Respin feature is triggered when players land between 6 and 15 drum symbols on the reels. Players receive respins that can be continually reset as their overall prize pot climbs up thanks to the arrival of special symbols.

Golden Macaque is an attack on the senses at first, but believe us when we say we mean it in the best possible sense! This slot is bright, vibrant and full of colour! The very first thing you'll notice are the beautifully drawn symbols, gorgeous temple and grand mountains sat behind the game reels.

Low paying symbols are your standard J, Q, K, A whilst high paying symbols are all wonderfully drawn animals each placed within coloured round frames, presumably, all of these symbols relate to the Chinese Zodiac, with each animal representing a zodiac sign. From lowest to highest value we have a rabbit, a rooster, a pig, a goat and a tiger.

In terms of game sounds, a relaxing tune slowly chimes away in the background during all times, it's nothing exciting, but it fits the theme. Things do pick up when a bonus feature is triggered as a fast-paced dance song kicks in, this on the other hand doesn't fit the theme of the slot, but it serves a purpose.

This Rare Stone slot is well-designed and incredibly easy to navigate. An action bar built into the bottom of the reels features everything you'll need to play. On the left-hand side of the action bar there's an information button that brings up the game's paytable and bonus information, next to this is an autoplay button that allows players to set up to 100 automated spins.

On the right-hand side of the action bar players can change their stake from anywhere between 0.20 and 200 (however this may vary depending on what casino you're playing at). Naturally, in the centre of the action bar is the game's spin button. At the top of the game's reels players will find four jackpot totals, the mini, minor, major and grand jackpots.

This medium volatility slot has a decent RTP of 96.50% which is slightly above average, in addition to this players can also win 2,000x their stake, which isn't huge, but it's still enough to grab our attention.

There's actually quite a lot going on in this slot, and the fire blaze respin feature can be quite overwhelming at first if you're not familiar with the feature, but ultimately Golden Macaque has a lot to offer. If you like games that don't necessarily rely heavily on free spin bonus features then you'll be just fine with this game!

Play Golden Macaque now at the following verified UK slots sites. These slot sites are fully licenced and have been thoroughly vetted and reviewed by us to ensure they offer a great user experience, are trustworthy, secure, and have a wide variety of the best online slots in their lobbies including Golden Macaque:-

Enjoyed Golden Macaque? Here's a handful of similar slots we think you'll like too. These online slots have been chosen based on features and themes similar to Golden Macaque. You might also want to check out other Rare Stone slots.