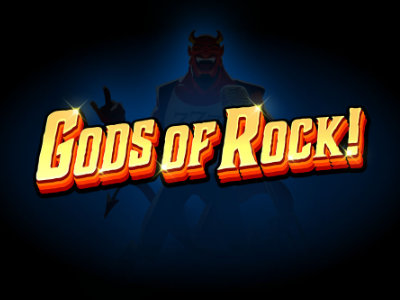 Gods of Rock is a 466 connecting pay ways slot developed by Thunderkick that brings five legendary characters from both mythology and the world of online slots, throwing them together to create the unlikeliest of rock bands. Join Medusa, Anubis, Athena, Thor, and Lucifer in high volatility slot gameplay that boasts cascading reels, wild symbols, reel multipliers, wild encores and a free spins bonus game that can see players win 20,000x their stake.

Gods of Rock is a cascading reels slot that features a whole host of bonus features and mechanics that work wonderfully together to create a sense of anticipation as one win leads to another.

Each feature is linked, so in order to trigger the Reel Multiplier, Wild Encore or Bonus Game Free Spins, players must fill up a Bonus Reel by landing exploding Charged Wild Symbols.

The Charged Wild is a special wild symbol that substitutes for all other symbols on the game reels. After increasing a win multiplier (that can be found at the very bottom of each of the reels) the charged wild will explode and all of the symbols that surround it will be removed.

A Reel Multiplier comes into play whenever a Charged Wild lands on that specific reel. For every one that lands, the multiplier will increase by 1x up to a maximum of 11x.

When players have collected 30 exploded symbols between 1 and 3 Charged Wild symbols will be randomly placed on the reels.

When players have collected 55 exploded symbols then they'll trigger the Bonus Game. This sees them receive 8 Gods of Rock Free Spins. Any Reel Multipliers that were in play will be carried over to this feature. The Bonus Meter won't reset until the meter is full, when this happens 3 additional free spins are awarded. 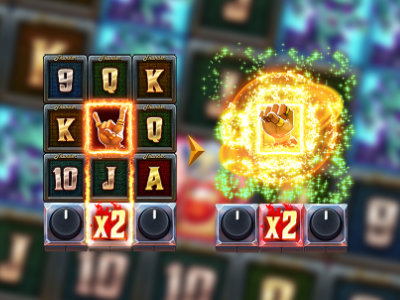 Charged Wilds (wild symbols that substitute for other symbols) can appear on the reels. When they do land they trigger a win multiplier for that reel, these wilds will eventually explode, removing all of the symbols that surround it. 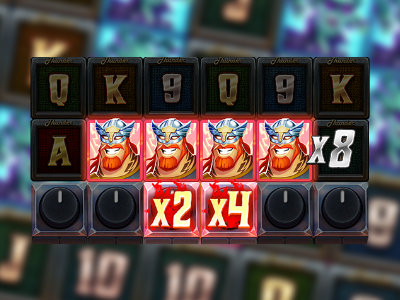 Whenever a Charged Wild lands on the game reels it will cause an increasing win multiplier to come into play that increases by 1x for every charged wild. 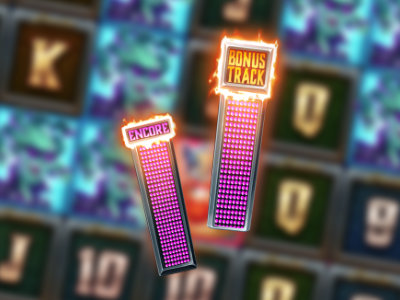 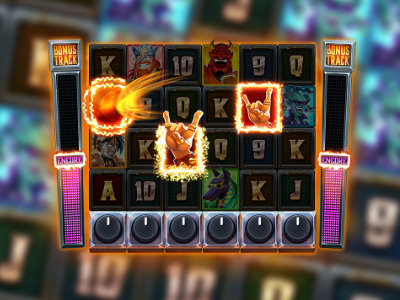 Upon collecting 30 exploded symbols on the Bonus Meter the Wild Encore feature will kick in, this sees between 1 and 3 Charged Wilds added to the reels. 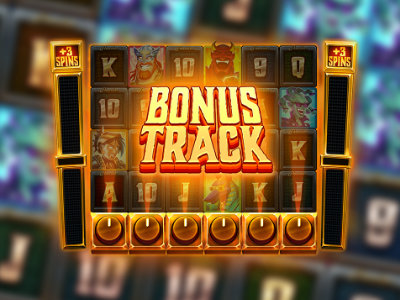 Upon collecting 55 exploded symbols on the Bonus Meter the Bonus Game will kick in, this sees players receive 8 free spins.

Gods of Rock is a 6-reel, 466 connecting pay ways slot developed by Thunderkick that combines the wild world of rock and roll with famous mythological Gods, and as you might expect, it's pretty damn cool!

This creative music-themed slot boasts bonus features and mechanics such as cascading reels, wild symbols, reel multipliers, wild encores and a lucrative bonus game that sees players rack up a whole host of free spins that could see them net prizes as large as 20,000x their stake.

This rocking slot sees five of the most famous mythological Gods come together on one stage to deliver the musical performance of their lives for thousands of adoring fans. These Gods are none other than Medusa, Anubis, Athena, Thor, and Lucifer... All characters you'd expect to see in any standard mythical-themed slots, Egyptian-themed slots or horror-themed slots.

The game reels are set up to look like a huge pile of guitar amplifiers! Behind these amplifiers, you'll find a crowd full of music lovers rocking along to the show. Low paying symbols are your standard 10, J, Q, K, A. Each of the five Gods appears as high paying symbols. The game's special Charged Wild symbol is a hand making the iconic devil horns gesture.

One thing you'd expect from a slot all about rock music is a great soundtrack, and if we're being honest, this is where we thought the slot fell a bit short.

Players are treated to a 30-second guitar riff on a constant loop... Ultimately, it's alright and fits the theme of the slot, but it does get a bit tiring after a while. The music is turned up a notch during features, but we're still firmly of the belief that those creating a music theme slot should put music at the forefront of their minds.

This slot utilises 'connecting pay ways', which means that winning symbols must connect in some way or form in order for players to successfully trigger a winning combination. Whenever winning combinations are formed they're removed from the game reels, allowing for new ones to fall into place.

Players will also notice that there are 6 dials along the bottom row of the game reels, these come into play whenever a Charged Wild lands on the corresponding reel. The Charged Wild will that dial into an increasing multiplier that starts at 1x.

In terms of navigating the slot in general, most of the key buttons are found on the right-hand side of the game reels. From top-to-bottom, there's a hamburger menu that brings up settings, a trophy button that brings up the paytable, sound settings and of course a play button. Autoplay and stake selection buttons are found directly to the left of the play button at the bottom of the game reels.

This high volatility slot can see players win an impressive maximum of 20,000x their stake, which is pretty generous in our opinion. That being said, we do think Thunderkick have been a little bit tight when it comes to RTP, with it sitting just above the minimum at 96.05%.

There are plenty of genuinely good opportunities for big wins by way of the Charged Wilds, however, we found it to be quite a grind to actually trigger the Free Spins Bonus Game, we got close a few times triggering the Encore though!

In terms of sheer creativity, this is one of the best slots out there! It could have been very easy for Thunderkick to cobble together any old slot revolving around Medusa, Anubis, Thor, Athena or Lucifier... But instead, they opted to do something brave, bringing them all together in what is without a doubt the unlikeliest of situations!

The bonus features and mechanics had us engaged (despite being somewhat stubborn to trigger), the theming was more than memorable and the maximum win potential had us salivating. Gods of Rock is a great music-themed slot that you must try at least once!

Play Gods of Rock now at the following verified online slot sites. These slot sites have been thoroughly audited and reviewed by us to ensure they offer an exceptional user experience, are trustworthy, safe, secure, and boast the best variation of online slots in their portfolio including Gods of Rock:-

Enjoyed Gods of Rock? Here's a handful of similar slots we think you'll like too. These online slots have been chosen based on features and themes similar to Gods of Rock. You might also want to check out other Thunderkick slots.