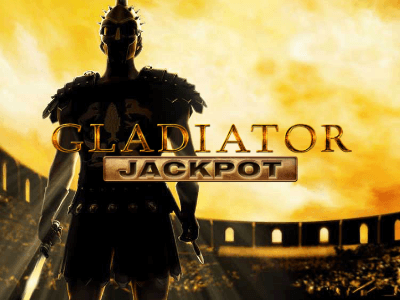 Travel back to Rome in this slot inspired by the iconic movie of the same name starring Russell Crowe. Developed by Playtech, Gladiator is an action-packed slot with 5-reels and 25 paylines. With a jackpot and a bonus feature that can give out free spins, extra wilds, extra scatters and free spins with multipliers - are you not entertained?

“ Become your own champion with the Coliseum Bonus and Gladiator Jackpot ”

Jump straight into the action and play Gladiator now at the following fully licenced UK slot sites. These slot sites have been thoroughly audited and reviewed by the team here at Slot Gods to ensure they offer an exceptional user experience, are trustworthy, safe, secure, and boast the best selection of online slots in their portfolio including Gladiator...

You finally can live like Maximus from Ridley Scott’s Gladiator and become a champion of slots. There aren’t many features available in this game, but the ones that do happen to be incredibly valuable. You have the opportunity to trigger Gladiator Jackpot Bonus to have a chance at winning the jackpot, or win the Coliseum Bonus for additional features.

The Coliseum Bonus appears after you’ve rolled 3+ scatter symbols anywhere on the screen. You are then given the option to pick a row for a single prize. The prizes available are: 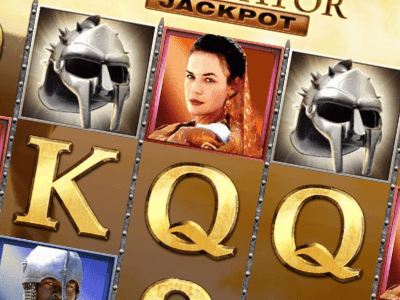 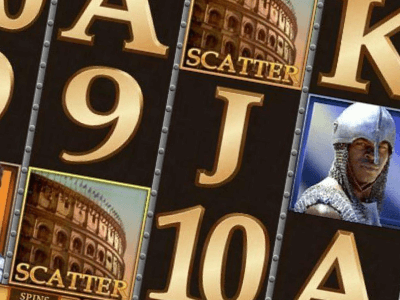 When 3 scatters appear 3 or more times on the screen, it triggers the Coliseum Bonus. You pick stones to reveal your prize for each row and you get an additional bonus as well. This could be free spins, extra scatters, extra wilds or free spins with multipliers. 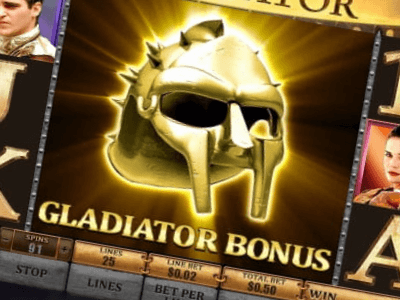 If you land a helmet wild on reels 2, 3 and 4, then you trigger the Gladiator Jackpot Bonus. The game will pick 9 random helmets of different prize values of either bronze, silver or gold. All helmets are added up and winning 9 gold helmets wins the jackpot.

Based on the Oscar winning film of the same name by Ridley Scott, Gladiator is an exciting slot game for fans of the movie. Developed by Playtech, Gladiator has 5-reels on 25 paylines. It’s traditional in gameplay, but makes up for it with symbols and designs that have come directly from the film itself.

The game is a thrilling TV/movie themed slot full of your favourite characters from the film. You can finally face off in the colosseum yourself to see if you have what it takes to become the mightiest warrior.

It may be minimal but it evokes the spirit of the film. You are surrounded by spectators in the colosseum, and it’s up to you to win. The reels are the focus in the middle with characters from the film highlighting different symbols. Juba, Proximo, Gracchus, Lucilla and of course Commodus are given character portraits for each symbol.

More impressively, when you win with one of these characters - the symbols change to stills from the game. It’s a nice little attention to detail and makes it feel authentic rather than a quick cash grab.

Soft ethereal music plays as you spin that is reminiscent of the theme song from the film ‘Now We Are Free’ by Lisa Gerrad. This adds a familiar feeling to the slot as it gives you the full experience of being a gladiator just like Maximus from the film.

Of course, there could be more such as animations in the background or sounds such as cheers from the crowd. These are small details that could’ve been included to push Gladiator to the next level.

Anyone can learn to play this game as it’s incredibly easy to pick up on. You set your bet and spin with the hopes of revealing the Coliseum Bonus or the Gladiator Jackpot Bonus. This is where the fun begins as you have the potential to receive bonuses such as free spins, multipliers or a chance at the jackpot.

Information on symbol meanings and paylines is available at the bottom left of the screen. To the right of the information symbol, you can set your bet and payline. You even have the option to set up to 99 autospins if you want.

Whilst the gameplay is straightforward, it’s a shame that there are no instructions of how to play for complete beginners. It’s easy to pick up and play but would’ve been helpful for players to clarify certain wins. Despite this, the interface and gameplay is clean and simple for a fun experience.

In the base game, you can win up to 5000x your bet if you land 5 of the Commodus symbols. You also have the potential to win on the progressive Gladiator Jackpot if you roll 9 golden helmets. Check with your chosen casino first to make sure that the Gladiator Jackpot is available in your game.

The RTP is below average at a measly 91.46% which is immensely disappointing. It also has a medium to high volatility level, so play conservatively and expect less frequent payouts. Gladiator tries to make up for these with the Gladiator Jackpot - but it’s definitely not a game for slot novices.

For those of you wanting to live out playing your own warrior fantasy, this game could be for you. It’s inspired by the colours and aesthetic of the film that mix well with the slot. Added with characters as well, make Gladiator a game fans of the film will enjoy.

Of course, be heedful with playing due to the volatility levels, but you could have some mighty wins if you play carefully. You will definitely be entertained by this action-packed slot full of charm and character with the potential to win big.

Play Gladiator now at the following verified UK slots sites. These slot sites are fully licenced and have been thoroughly vetted and reviewed by us to ensure they offer a great user experience, are trustworthy, secure, and have a wide variety of the best online slots in their lobbies including Gladiator:-

Enjoyed Gladiator? Here's a handful of similar slots we think you'll like too. These online slots have been chosen based on features and themes similar to Gladiator. You might also want to check out other Playtech slots.