Eye of Horus Megaways brings more excitement to the Egyptian themed slots with a Megaways makeover.

Eye of Horus Megaways is a 6-reel, 15,625 ways to win slot packed full of features to entertain you such as free spins, expanding wilds and cascading wins. There’s even the potential to win up to 10,000x your stake.

Jump straight into the action and play Eye of Horus Megaways now at the following fully licenced UK slot sites. These slot sites have been thoroughly audited and reviewed by the team here at Slot Gods to ensure they offer an exceptional user experience, are trustworthy, safe, secure, and boast the best selection of online slots in their portfolio including Eye of Horus Megaways...

Journey to ancient Egypt and let the Egyptian Gods decide on your fate. If you are a fan of the original Eye of Horus and Egyptian themed slots, then you’ll love this one. The game has the four main royal cards of A, K, Q and J that are ranked the lowest value. It starts getting higher in value with symbols such as fans, ankhs, beetles, eagles and dogs.

Big wins come from the eye of Horus symbol and the temple wild, with a potential to win up to 100x your stake. The best part of the game comes from the Horus expanding wild that substitutes any symbol except for the temple wild. If you trigger 1, 2, 3 or 4 Horus wilds, then you could win up to 7 extra free spins. Landing on 3 or more temple symbols will give you an additional 12 free spins. 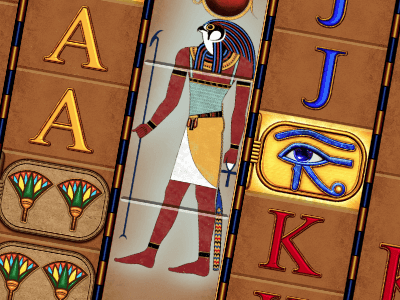 Horus is the wild symbol and can expand on the reel to replace any other base game symbol - except the temple. This addition changes symbols and gives you even more chances to win. 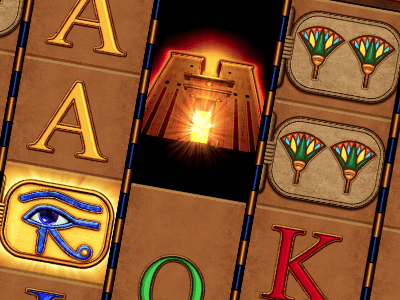 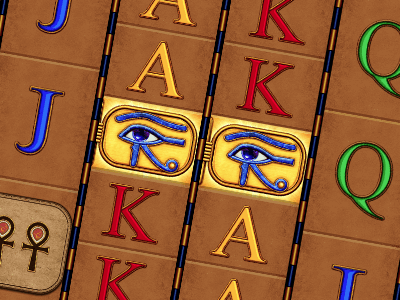 When winning symbols land on the reels, they are removed and replaced to increase your chances of hitting another win. This will continue until no more pay lines are created.

Released in 2019, Eye of Horus Megaways brings the excitement of Ancient Egypt directly to you. Expect to see artwork that resembles stone tablets mixed with regal colours such as gold, blue and red. As the title suggests, it’s an Egyptian themed slot developed by Blueprint Gaming that increases the gameplay by using the Megaways mechanic.

It’s played on 6-reels across 15,625 paylines. This added with free spins, cascading wins and expanding wilds definitely makes it a slot that you should check out.

Eye of Horus Megaways is set in an ancient Egyptian tomb with a stone tablet set as the reels. The whole screen is full of tasteful colours that evoke the beauty of Egypt. It’s a subtle design that makes it incredibly easy on the eyes to play.

The music is reminiscent of classic slots with soft electronic music as you spin and the usual sounds you’d expect from reels. They’ve definitely blended the style of Ancient Egypt with typical slot sounds but it mixes well to create something that feels nostalgic to players. You’ll be reminded of the days playing physically in a casino.

It’s a simple screen that doesn’t try to overwhelm you which makes it easy and fun to play. The reels are clear to see and everything is displayed in a reasonable manner.

With 6-reels and over 15,625 ways to win, there’s a fair bit of gameplay involved. The Megaways addition makes it more thrilling to play as there is so much potential to land a winner. The addition of cascading reels, multiple free spins and expanding wilds can completely change your game. You are guaranteed to have an enjoyable experience whilst playing.

The layout of the screen is simple but effective. It has bet adjustment to the left side which allows you to bet between 0.10 and 10.00. To the right of the screen, you have information on how to play the game, the spin button and finally the autospin button at the bottom. You can set up to 100 autospins if you decide to.

The game's volatility is medium to high, so it has the potential to pay out a mix of low and high wins. You might not see the higher wins as much as you’d like, but it’ll be exciting when it eventually happens. Its RTP is 95.49%, which is just below average. If you are lucky, then you could win up to 10,000x your stake.

Eye of Horus Megaways is full of helpful features such as free spins and expanding wilds, so there are a few opportunities to expand your gameplay and win.

Eye of Horus Megaways is stylishly mixed with lively gameplay from Megaways. You have even more ways to win in this fresh take on Egyptian slots. With the design, sounds and gameplay - it feels like a classic slot with some entertaining additions.

Blueprint Gaming never fails to deliver something memorable to gamers. The style is simple, but more importantly it’s fun to play. It’s an all-round joy to play at times, and brings something for all types of slot fans.

Play Eye of Horus Megaways now at the following verified UK slots sites. These slot sites are fully licenced and have been thoroughly vetted and reviewed by us to ensure they offer a great user experience, are trustworthy, secure, and have a wide variety of the best online slots in their lobbies including Eye of Horus Megaways:-