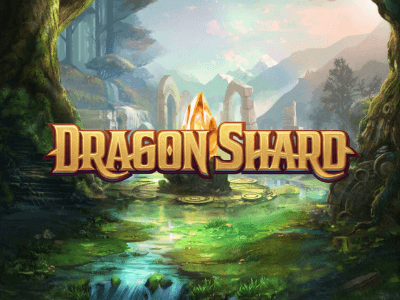 Different elemental forces clash over an ancient dragon shard and the winner is up to you. Join the Ice King or Fire Queen and see which one wins the ancient dragon treasure.

With free spins and stacked symbols, players can see wins of up to 800x your stake. So join the mythical realm and uncover the hidden treasures in Dragon Shard.

The fire queen and the ice king can act as stacked symbols that stack by 5. All other high and low symbols are double stacked as well making for more wins!

Inspired by fantasy worlds of dragons and powerful heroes, Dragon Shard is all about an Ice King and a Fire Queen fighting for the valuable dragon shard. Microgaming’s Stormcraft Studios have created a mythical slot that could visually rival fantasy shows such as Game of Thrones.

Not only does it look phenomenal, but it has engaging features such as stacked symbols and free spins to create something spectacular. Journey through the magical realms and reach the valuable dragon shard for loads of rewards.

As the slot opens, you’ll notice a tranquil background that looks like straight out of a fantasy film. The background is static but there are flickers alongside the screen to make it look animated. That’s not to say that the design looks cheap, the opposite really as the design looks thoroughly polished.

The same goes for the characters themselves as they look like they have come straight out of a graphic novel. They are intricately designed and could easily be seen in any fantasy show.

Free spins take you to the ice realm and it adds another layer to the slot. It feels more than just a cheap cash grab to latch onto the fame of fantasy shows such as Game of Thrones. Snow falls alongside the reels with a completely different snow filled background.

To blend in well with the visuals, the music is entirely epic. With an orchestra of instruments, it feels like a grand adventure full of excitement.

Gameplay wise - it’s pretty straightforward. The aim is to match up symbols along the payline, so don’t worry about any complicated features or paylines. Mobile players will be happy to learn that they have a portrait mode and it’s optimised so mobile players will be able to play without compromising anything.

Thankfully, the RTP is at a fantastic 96.77% which is way above the average so you know the theoretical return is fair. It has a medium volatility level as well, so it means that the returns will be a mixture of low frequent wins and less frequent higher wins.

According to the developers, players can win up to 160,000 coins throughout the slot. If the reels are filled with wilds, then your player will win 800x their stake and is possible on each free spins round. This is the maximum amount that we saw throughout, so be aware of this.

There’s no denying that this slot looks absolutely fantastic. It will completely transport you to a fantasy realm and gives you the potential to win prizes. As it’s a medium volatility slot, it’s perfect for high rollers and newcomers.

The developers state that you can win 160,000 coins, but we only noticed a maximum payout of 800x your stake. The payout may not be extraordinary, but the win potential is brilliant.

If you love mythical slots and want something that feels epic, then definitely check this one out.

Play Dragon Shard now at the following verified online slot sites. These slot sites have been thoroughly audited and reviewed by us to ensure they offer an exceptional user experience, are trustworthy, safe, secure, and boast the best variation of online slots in their portfolio including Dragon Shard:-

Enjoyed Dragon Shard? Here's a handful of similar slots we think you'll like too. These online slots have been chosen based on features and themes similar to Dragon Shard. You might also want to check out other Stormcraft Studios slots.