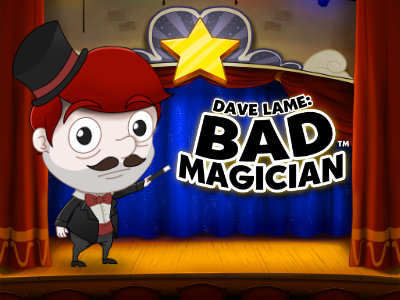 Dave Lame Bad Magician is a quirky 5-reel, 20 payline slot developed by SG Digital that can see players randomly trigger respins with wins that pay both ways and trigger up to five lucrative free spin bonus features that can pay up to a maximum of 5,000x! If you're after a friendly, feel-good magic-themed slot then this medium volatility game could well be the one for you.

Dave Lame Bad Magician has two special bonus features that players should be well aware of, Dave Lame's Disappearing Act and not one, two, three or four... But FIVE free spins bonus features! Here's what you can expect from them.

During base gameplay, there's a chance that TWO Dave Lames will appear on either side of the game reels. They will then conjure up some magic that causes wins to pay both ways as opposed to just left-to-right for anywhere between 2 to 5 respins.

Players then have the option to gamble their bonus feature for another one entirely if they're not a fan of the one they've won. Doing so will see them select from another two pots that can either feature other bonuses OR a consolation prize which sees them receive a 10x or 15x multiplier. Alternatively, players can opt to collect their original bonus feature and play through that instead.

The five free spins bonus features are played as follows:

Upon triggering this feature players must pick one of five multiplier cards (2x, 5x, 8x, 10x or 25x). Any multiplier cards that lands on the game reels during free spins will be sticky and remain on the reels until the end of the feature.

If a joker symbol lands on the reels during the spins then the "Is this your card?" modifier will come into play. Dave Lame will reveal the same multiplier the player chose, then the multiplier will be increased by the original value. If Dave Lame happens to pick the wrong card then players will receive 1, 2 or 3 additional free spins instead.

At the end of the free spins, all multipliers are added together and paid out to the player.

An unlucky assistant is tied to a rotating wheel whilst Dave Lame dons an eye mask, he then proceeds to throw knives at three balloons selected by the player. When these balloons pop they reveal a multiplier (that can be 2x, 3x, 5x, 8x, 10x, 20x, 30x or 50x). At the end of the free spins, all multipliers are then added together and paid out to the player at the end of the feature.

Rabbits out of Dave's Hat

On each free spin rabbits and doves will hop or fly out of a top hat placed in front of the game reels. These animals will then splat into a random symbol, turning it into a wild and potentially forming a winning payline.

Sawing a Reel in Half

Dave Lame will cut the reels into either 2, 3 or 4 separate reel sets. Whilst sawing the reels in half any wild symbol that lands will transfer onto all of the other reel sets. If players land 3 an additional 3 bonus symbols during this round then they'll receive an additional 2 free spins.

Players will receive unlimited free spins when they land Escapology Act! Dave Lame will try and escape from a tank of water whilst chained up! Each tap symbol that lands on the reels during the free spins will add an extra row to the bottom of the existing reel set. This will also add 10 more payline and increase a win multiplier.

Free spins will only end once the reel set has increased 6 rows, to a total of 9 rows or when the maximum win has been achieved. 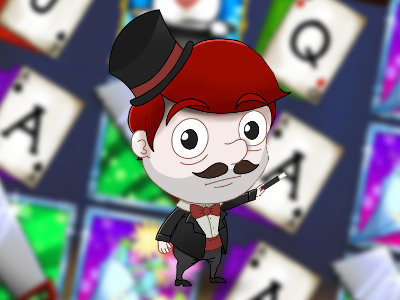 Two Dave Lames may appear on both sides of the game reels, players will receive anywhere between 2 to 5 respins with wins paying both ways rather than just left to right. 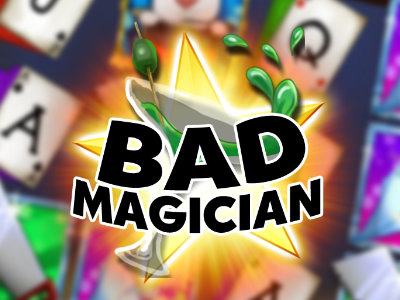 Whenever players land 3 bonus symbols during base gameplay they must pick a random pot that will reveal one of five lucrative free spin bonus games.

Dave Lame Bad Magician is a 5-reel, 20 payline slot from SG Digital that pays both ways randomly during base gameplay whenever Dave magically clones himself! This medium volatility slot features five different free spins bonus rounds - Knife Throw, Rabbits out of Daves Hat, Card Trick, Escapology Act and Saw the Reels in Half.

This charming cartoonish slot has gone down the same route as Gonzo's Quest and Dr. Toonz, having the game's main character Dave Lame (whose name is a play on David Blaine) nervously stood directly to the left of the game reels, interacting with players and making odd noises here and there whenever something interesting happens such as a winning spin, near miss or a bonus trigger... It'd be fair to liken Dave Lame to Mr Bean judging from the noises he makes, he mumbles a lot and never really speaks!

The game itself is set on the stage of one of Dave Lame's infamous magic shows. Low paying symbols in this game are actual playing cards displaying J, Q, K, A whilst high paying symbols are items associated with his act, these are a saw, a rabbit peering out of a hat, a bouquet of flowers, an explosion with the words BAD MAGICIAN written across it and two crossing magic wands with the words BONUS written across them.

In terms of the soundtrack, a whimsical and cheery fairground tune plays throughout gameplay, it fits the aesthetic of Dave Lame Bad Magician down to a tee.

One additional thing we really liked about Dave Lame Bad Magician that we thought was well worth mentioning is the fact that the cursor becomes a spotlight during bonus features, which is quite a nice touch.

Dave Lame Bad Magician is a delightfully simple slot, there are only four buttons that are easily found at the bottom of the game reels. From left to right there's a game settings button, stake selection button, spin, and autospin button (that allows players to set up to 100 automated spins). We always like to see an easy-to-understand slot that doesn't have us scratching our heads in confusion!

This medium volatility slot has a distinctly average RTP of 96.10% and an equally average maximum win potential of 5,000x the player's stake. We found big wins slightly difficult to come by during base gameplay, however, as to be expected things certainly improved when playing the bonus features, which we actually managed to trigger quite regularly.

Dave Lame isn't such a bad magician at all in our eyes, he actually conjured up some fairly big wins whilst playing through the five free spin bonuses! This cute and charming magic-themed slot from SG Digital has loads going on that keep us well and truly engaged.