Cat Wilde and the Doom of Dead

Cat Wilde and the Doom of Dead is notable for being the first game in the Rich Wilde series to not actually feature Rich Wilde at all! This new game instead introduces his daughter to the fold in her very own feature game.

With 5-reels and 10 paylines this slot is pretty straight forward to play and can be enjoyed by new players and veterans alike! If you like expanding wilds and an incredible amount of free spins you'll absolutely love this slot.

Cat Wilde and the Doom of Dead Screenshots

Cat Wilde and the Doom of Dead Features

The most important bonus feature to keep an eye on in the Doom of Dead is certainly the expanding wilds. These are extra interesting as scatters and wilds, and wilds are scatters! Whenever a scatter symbol lands on the reels it will expand to cover the entire reel, revealing one of several ominous-looking mummified ancient Egyptian Pharaohs.

If you manage to land three compass scatter symbols anywhere on reels 1, 3 and 5 at the same time then you’ll automatically kick start a hugely lucrative free spins round.

Before the free spins can begin, one regular random low or high paying symbol is selected on a spinning wheel to become the designated special expanding symbol. When this special symbol lands during the free spins they take up an entire reel and unlock even more paylines.

To get the best return from your money during the bonus round you’ll want to land five wilds, or five expanded Cat Wilde symbols to receive the game’s maximum payout on one spin. 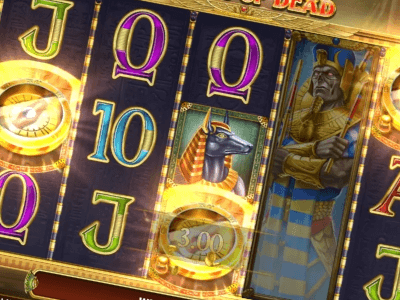 If players manage to land three compass scatter symbols on reels 1, 3 and 5 then they'll automatically trigger 10 free spins that could rise as high as 50. 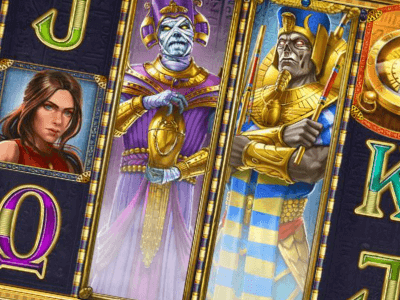 In Cat Wilde and the Doom of Dead scatter symbols are wild and wilds are scatters! What's more, whenever a scatter symbol lands on the reels it will expand to cover an entire reel.

Cat Wilde and the Doom of Dead Review

This Egyptian 5-reel, 10 payline slot is exactly what you’d expect from a game in the Rich Wilde series, highly volatile, feature-rich fun! This superbly designed slot could be considered a 2020 upgrade on The Book of Dead, with the game sharing many similarities.

We’ll admit, we were sceptical at first, we just weren’t sure whether Cat Wilde could fill her father’s iconic boots, but we were wrong to be unsure! Cat Wilde and the Doom of Dead is absolutely fantastic and offers plenty in the way of exciting bonus features and mechanics.

Cat Wilde and the Doom of Dead is a very well polished game. As mentioned, it’s very similar to Rich Wilde and the Book of Dead (as the name would suggest), vibrant gold and a rich blue are the two primary colours here and it’s pretty pleasing on the eye.

The symbols themselves are incredibly well designed, especially the undead Pharaoh's that appear within the expanded reels, the art in this game is easily amongst the highest quality we’ve ever seen in an online slot, and Play’n GO deserves all the plaudits for this.

In terms of sound, the developers have gone down a similar route to that of Rich Wilde and the Shield of Athena. An energetic cinematic score plays as players spin the reels. The music really does make you feel like you’re watching a hit blockbuster play out as your wins rack up.

Like its predecessor in the Wilde series, this is a back-to-basics slot, and that’s most certainly not detrimental to its success. Navigating the game is incredibly easy and there’s no need to worry about what’s going on elsewhere, as everything takes place there and then.

For what is a highly volatile game you’ll be very pleasantly surprised to discover that Doom of Dead is incredibly generous when it comes to expanding wilds. We found that we were seeing them on a very regular basis during the base game.

This slot is potentially the most volatile Wilde slot in the series… So if you have the ability to be patient and wait out the dud spins then big wins are what you’ll eventually come across. With a RTP of 96.29% and a maximum win of 5,000x your initial stake on a single base game spins, we think giving this great slot a spin is a fair shout.

If you couldn’t tell from the rest of this review, we absolutely loved Cat Wilde and the Doom of Dead… Perhaps we could even get used to seeing her more than we do her famous Father!

With extended scatters and wilds, plenty of free spins and lucrative big wins on offer there’s absolutely no reason why you shouldn’t be playing Cat Wilde and the Doom of Dead right now.

Play Cat Wilde and the Doom of Dead