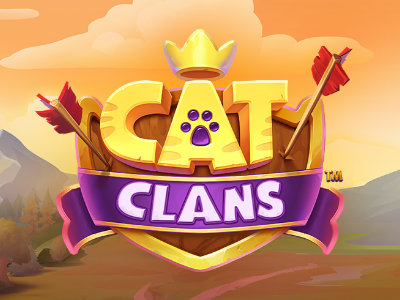 Embark on a journey to the highlands to find the four different Cat Clans. Help restore peace amongst the different clans and be rewarded generously for your assistance.

Cat Clans is packed full of features! The wild symbol can substitute any symbols and lands with a multiplier between x1 and x5.

Alongside that, you can trigger free spins by landing 3 free spin symbols. You'll trigger the Cat-a-pult Free Spins and be awarded 3 spins. If you land a wild, then you'll reset the spins to 3 and the wild will become sticky throughout.

Once a wild lands, each remaining spin increases the value of the multiplier on the sticky wild going up to x9. When any of the cat symbols land, a golden paw can appear on the reels to give you the chance to trigger the Clan Battle Bonus. Each of the cat symbols draws a prize between 10x to 10,000x your stake and the symbol that lands the most during 5 free spins indicates the prize. 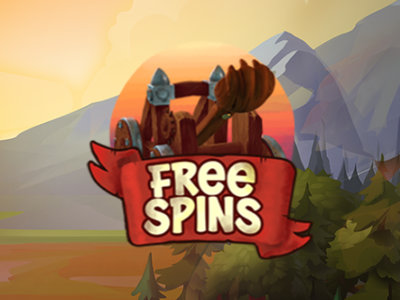 You can trigger this bonus feature by landing 3 free spin symbols to gain 3 spins. Each wild resets the spins and becomes sticky throughout. 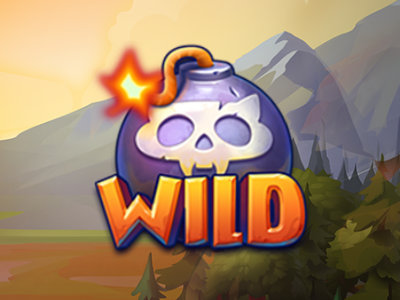 The wild symbols can substitute all symbols and land with a multiplier between x1 and x5. However, during free spins, these multipliers can increase up to x9. 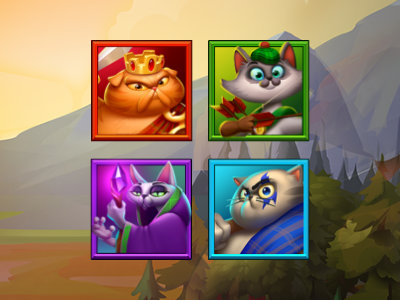 During free spins, a gold paw can appear to give you the chance to trigger the Clan Battle Bonus. The symbols draw a prize between 10x to 10,000x your stake.

There are four great cat clans amongst the highlands and it's up to you to unite them all together. Developed by Snowborn Studios with Microgaming, this animal slot plays on 5-reels with 20 paylines.

Cat Clans is a high volatility slot that is all about cats! You won't be disappointed with the gameplay either as there are free spins, multipliers and wilds leading to wins of up to 20,000x stake.

As the slot opens up, you are greeted by a bright and vibrant kingdom almost picturesque and out of a storybook. Centred in the middle of the screen, you'll find the reels and a chest next to it.

The reels themself contain four different cat kings representing the different clans. There's a braveheart cat, Robin Hood cat, King John cat and a mage cat which is hilarious to see them all together.

During Cat Clans, you can hear accordion noises mixed with bagpipes to create a Scottish theme to make the slot feel like the film Braveheart. The entire Cat Clans slot feels inspired by the Cat Quest games but with a more highland theme.

With Cat Clans, the gameplay is traditional in the base game with only 20 paylines, but the free spins mechanic combines the popular respin mechanic which resets the counter with a specific symbol.

Everything you could possibly want with this slot is to the right of the reels. The spin button is easy to find and next to the bet level.

Cat Clans is a high volatility slot that pays out less often, but it'll be higher when it does happen. According to the developers, the hit rate of this slot is 33.29% meaning that this is the percentage that you'll hit a winning combination.

This slot contains a standard RTP of 96% which is acceptable with online slots. As for the maximum win, you can find yourself winning 20,000x your stake on a single spin through the free spin feature with respins and multipliers.

This adorable slot is more intense than it looks with the high volatility gameplay. The stand-out feature in this slot is the free spins feature that combines the popular respin mechanic to make it thrilling.

Whilst the visuals aren't mesmerising, Cat Clans manages to deliver a tasteful design that is easy on the eyes. If you love animal slots and want something a little different, try out Cat Clans for a fur-midable time.

Play Cat Clans now at the following verified online slot sites. These slot sites have been thoroughly audited and reviewed by us to ensure they offer an exceptional user experience, are trustworthy, safe, secure, and boast the best variation of online slots in their portfolio including Cat Clans:-

Enjoyed Cat Clans? Here's a handful of similar slots we think you'll like too. These online slots have been chosen based on features and themes similar to Cat Clans. You might also want to check out other Microgaming slots.