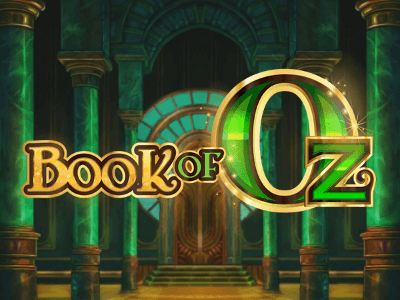 Inspired by the famous book series, The Wizard of Oz, Book of Oz is a magical slot that focuses on dazzling players with vibrant visuals and simple bonus features.

You’ll find free spins, expanding symbols and re-spins. Lucky players will be able to win up to 5,000x your stake through expanding symbols. This combined with a RTP that can go up to 96.50% during re-spins, makes it a wondrous slot to check out.

Containing free spins, expanding symbols and re-spins, Book of Oz has everything you need except a multiplier feature. It’s worth noting that the re-spins are paid. Not only that but they appear just in the base game and only wins involving the re-spin are paid out to the player.

Managing to land 3 or more book scatter symbols will trigger the free spins round. Rolling 3 will gain you 10, 4 will give you 12 and 5 will give you 25 free spins! Free spins can also be retriggered!

At the start of free spins, the special symbol is randomly awarded. It expands to cover the reels and pays on matching symbols land anywhere on the line. You can win up to 5,000x your bet during this mode.

You can re-spin at the end of each base spin and choose to re-spin as many times as you like. If you are close to completing a win, you can re-spin one reel at a time. The only downside is that this comes at a varying cost in the game.

Become entranced by the magical world of Oz. Developed by Triple Edge Studios and published by Microgaming, Book of Oz is a 5-reel, 10 payline slot that is inspired by the Wizard of Oz book series written by L. Frank Baum.

Granted the slot doesn’t have the variety and creativity of features found in other magical slots such as Dr Fortuno, but manages to deliver with most of the ones needed for an online modern slot.

As the slot begins, you’ll notice that the background is surrounded by beautiful décor. Taken straight from the books themselves, you are in Emerald city and in the Wizard’s palace. It completely oozes decadence and grace in the background to completely transport you to the enchanting land of Oz.

Sounds and music played through the slot has an ethereal quality to it with steady beats and harp sounds. At times it can be serene and calming, whilst other times it can sound intense.

Despite being based on a fantastical book series - the gameplay is simple. All buttons and menus are featured at the bottom of the screen. The bottom left button leads you to settings, gameplay and features in game you need any of that.

It’s easy to see the spin button as it’s enclosed within a green bubble to make it stand out. Betting and autoplay are next to the spin button with players being able to set between 10 to 100 autospins.

Features such as free spins and re-spins improve the win potential greatly. Especially considering that re-spins have an increased RTP at 96.50% during this mode. The only downside is that you have to pay for re-spins in this game.

Book of Oz could’ve been a landmark within magical themed slots, but sadly doesn’t fully deliver. The cost of using re-spins lets it down a lot. Not only this, but there are no multipliers on this game. Design wise it’s incredible, win potential is decent and the gameplay is pretty fun - but the features aren’t fully there. That’s not to say that Book of Oz isn’t a great game, but it falls short of being brilliant.

Play Book of Oz now at the following verified online slot sites. These slot sites have been thoroughly audited and reviewed by us to ensure they offer an exceptional user experience, are trustworthy, safe, secure, and boast the best variation of online slots in their portfolio including Book of Oz:-

Enjoyed Book of Oz? Here's a handful of similar slots we think you'll like too. These online slots have been chosen based on features and themes similar to Book of Oz. You might also want to check out other Triple Edge Studios slots.