Embark on a spiritual journey through nature with Blazing Bull 2. Developed by Relax Gaming's Kalamba studios, Blazing Bull 2 is an animal slot that plays on 6-reels with up to 4,096 paylines along with a variety of features.

With two different free spin options with Multiplier Wild Free Spins and K-Split Free Spins, you'll be winning big in no time. This high volatility slot can deliver wins of up to 50,000x your stake - so find your spirit animal and see if you can be a big winner in Blazing Bull 2.

Jump straight into the action and play Blazing Bull 2 now at the following fully licenced UK slot sites. These slot sites have been thoroughly audited and reviewed by the team here at Slot Gods to ensure they offer an exceptional user experience, are trustworthy, safe, secure, and boast the best selection of online slots in their portfolio including Blazing Bull 2...

During the base game of Blazing Bull 2, the free spins are indicated by the meter above the reels. There are two different meters, one that is yellow and one that is blue. Each time you spin, the meters will increase with 15 spins adding +1 free spin to the Multiplier Wild meter, whilst 30 spins will add +1 spin to the K-Split meter. You can get a maximum of 20 free spins and the meter resets to 7 once the feature has been triggered.

Ultimately, the bonus rounds can be triggered by landing 3 or more sun or moon scatters. The moon scatters will trigger the K-Split Free Spins and a random symbol is selected to be split into 2 or 3 more symbols.

If you land 3 or more sun scatters, then you'll activate the Multiplier Wild Free Spins with random multipliers attached that have values of x2, x3, x5 or x8. These multipliers count as 2, 3, 5 or 8 ways for the column they land in and also substitute all other symbols except the bonus symbol.

Non-UK players have the option to buy bonus rounds through the HyperBonus feature for a portion of your stake which can increase the RTP to 97.21% depending on your choice. However, this is not available in the UK. 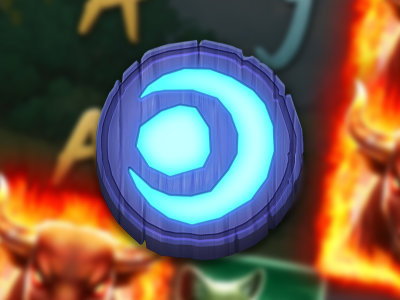 Triggered by landing 3 moon scatters and determined by the K-Split meter above the reels, these free spins split a random symbol into an extra 2 to 3 symbols. 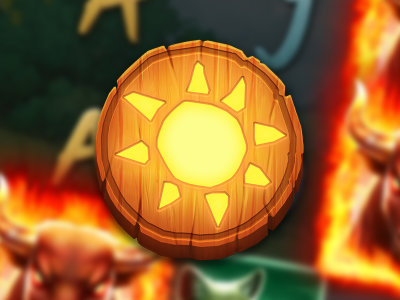 Landing 4 or more sun scatters will trigger the Multiplier Wild Free Spins with the number of free spins determined by the Wild meter above the reels. Amazingly, you can trigger multipliers of up to x8.

Bigger and better than ever, Blazing Bull returns with a much-awaited sequel. Developed by Relax Gaming's Kalamba Games, Blazing Bull 2 plays on 6-reels with up to 4,096 ways to win. This animal slot is packed full of amazing features that are sure to boost up your gameplay.

On top of that, you can win up to 50,000x your stake in this high volatility slot. So, embark on a spiritual journey unlike any other with Blazing Bull 2 for a chance to win big.

There is no denying that the visuals for this slot are utterly stunning as it is set amongst a mythical forest with vibrant colours. Unfortunately, it's hard to get past the visuals when the slot is a little jittery at times with certain animations. After trying multiple demos and versions of the game, the conclusion was drawn that the slot had a lag to it which can be off-putting at times.

Surrounding the reels, you'll notice various statutes of animal heads that look like totems. These are designed beautifully and have so much detail such as the carvings of the wood alongside the individual paint colours. Of course, the symbols on the reels look brilliant and each look like the spiritual descendants of the animals in question.

As for the music, there is a woodwind score accompanied by drums as well which fits in well with the visuals. It gets a little bit more intense throughout the free spins but still falls in line with the tone.

Blazing Bull 2 plays on 6-reels with 4,096 ways to win and features two main features. Aside from this, this is an easy slot to pick up and play. All of the relevant menus can be found at the bottom of the screen with the spin button, autospin and bet level at the bottom right of the screen. To the far left, you'll find additional menus through a drop-down menu in case you need any further help.

The core gameplay has a high volatility level alongside a decent RTP of 96.26% which is just above the average. Non-UK players will be able to reach 97.21% through the HyperBonus but this is not available for UK players. Thankfully, the slot compensates by having an incredible win of 50,000x your stake which can be won through the multipliers and free spin rounds.

Blazing Bull 2 is a fun and simple game that is miles above the original with better features and fantastic win potential. The only real issue we encountered was the lagging throughout spins but that could be another issue.

Of course, Blazing Bull 2 isn't going to shake up the entire online slot community, but it's engaging enough that many will love it. If you loved the original or love spiritual, animal slots - then definitely give Blazing Bull 2 a spin.

Play Blazing Bull 2 now at the following verified UK slots sites. These slot sites are fully licenced and have been thoroughly vetted and reviewed by us to ensure they offer a great user experience, are trustworthy, secure, and have a wide variety of the best online slots in their lobbies including Blazing Bull 2:-

Enjoyed Blazing Bull 2? Here's a handful of similar slots we think you'll like too. These online slots have been chosen based on features and themes similar to Blazing Bull 2. You might also want to check out other Relax Gaming slots.