Black Mamba is a feature-rich Cluster Pays slot developed by Play'n GO based on the somewhat obscure Italian rock band of the same name. This game revolves around the solo feature that can activate randomly on non-winning spins to help boost gameplay with modifiers. This slot also has a decent multiplied free spins round and a meter that can charged to trigger concert mode which sees multiple modifiers come into play at once.

“ Fun, loud and rewarding, this slot gives a winning performance. ”

Jump straight into the action and play Black Mamba now at the following fully licenced UK slot sites. These slot sites have been thoroughly audited and reviewed by the team here at Slot Gods to ensure they offer an exceptional user experience, are trustworthy, safe, secure, and boast the best selection of online slots in their portfolio including Black Mamba...

Play'n Go’s ‘rock’ slot series has seen some awesome features and rewarding gameplay. The Black Mamba slot carries on the tradition with plenty to look forward to. The game takes a different approach to the usual slot set up with 5 reels and 5 rows.

If you like bonus features then you’re in the right place, this game has a total of 6 bonus extras. Let’s take a look at what this head-banger has to offer. 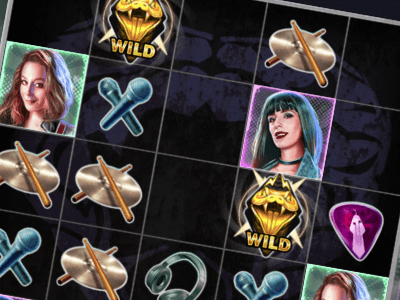 Any winning symbols from a combination are removed and replaced to provide another opportunity to increase the payout. A wild symbol will also appear in the middle of a win consisting of 3 symbols. The win multiplier increases with every new drop/win. 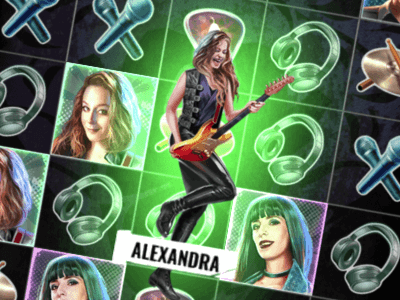 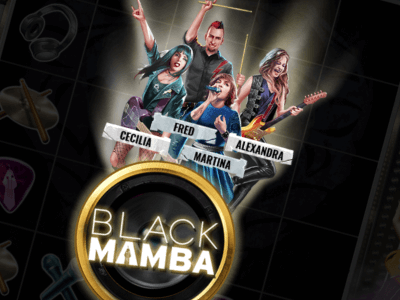 The Concert feature is activated by charging the meter. With 6 sections, it is filled by 1 for each band member symbol, 4 charges will trigger the feature. Once triggered it will play all the solo features one after the other. 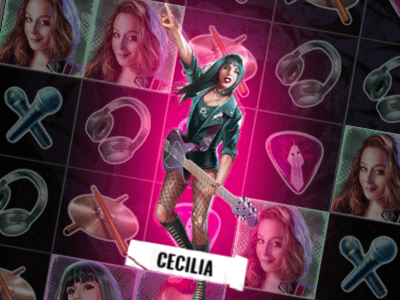 1 of 2 wild symbols is randomly added to the grid. 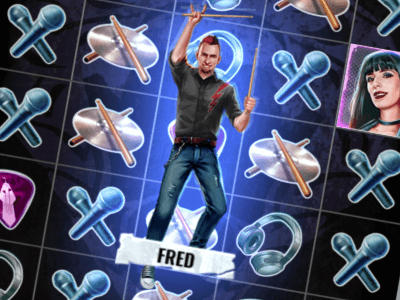 1 set of symbols is transformed into another symbol randomly. 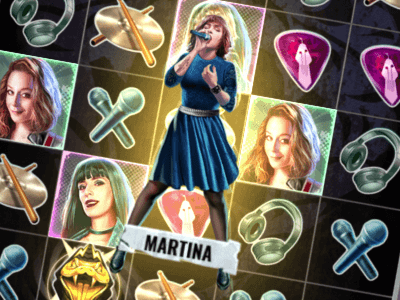 The bottom row is destroyed except for wilds and the Martina symbol replaces another band member. If there are no band member symbols, no wild is added. This activates only in the Concert feature and on every free spin.

Black Mamba continues Play'n Go’s rock slot series, taking you into the band’s rockin’ world. The game is set around the Italian rock band of the same name, you will rock out with Alexandra, Cecilia, Fred and Martina as they put on a winning performance. You don’t need to be a fan of rock music to enjoy this feature-full slot, although it will boost your enjoyment!

The Black Mamba slot uses a grid structure that features 5 reels and 5 rows, it also uses cascading reels where the symbols drop down and crush other symbols. If you hit a winning combo, it will obliterate and new symbols will replace the old ones, increasing your chances of boosting a payout on the same spin.

The slot packs in plenty of action with multipliers, free spins and more bonus extras. There is no shortage of payouts either, this game can bag you a seriously rockin’ 5,000x your stake. The game is visually impressive, as you would expect from the likes of Play ‘N Go, they ramp up the action with awesome imagery and excellent gamification.

The game design puts you front and centre of a Black Mamba performance where you can appreciate the rewarding atmosphere.

Black Mamba is one of the more music-focused games from the ‘rock’ slot series. The game takes place at a Black Mamba concert with huge speakers and bank members ready to rock out to rewards.

The heavy metal-themed game thumps with songs from the Black Mamba catalogue. You will enjoy some cool animation throughout the game, whether it be the thudding speakers, flashing lights or one of the band members rocking out with a winning solo. As you play you will feel like you’re witnessing one of the greatest rock performances ever, with smoke machines, lights and plenty more extravagance bursting from the game.

On the reels are drumsticks, microphones, headphones, guitar picks and all the familiar faces of the band. The game has a dark but yet bright feel with lots of black and purple on the reels. Black Mamba is a visually intense slot with a lot happening, the captivating audio and imagery fully immerse you into the experience.

Set across 5 reels and 5 rows, this game uses the cascading reels mechanic, where winning combos are replaced with new symbols and enhanced wins. The game has a lot going on with features and a win metre that increases and triggers features.

The game features the usual set up for a Play'n Go slot. The spin control panel features a large spin button, auto spin control, an information icon and the bet amount which can be set from £0.20 to £100 per spin.

To the left of the reels, you have two speakers, one of which acts as the feature metre that increases every time you land a win with a band member and to right of the reels features a stage for one of the band members to rock out their solo feature.

Black Mamba is a highly volatile game with heaps of rewarding features including an unlimited multiplier that could bring in wins worth up to 5,000x your stake. The game has a top prize of £500,000 so there are some very enticing rewards to be had.

The band members are the top-paying symbols with Martine as the best paying. The free spins feature is the most generous, but the other 5 bonus extras all increase your chances of landing more wins.

You wouldn’t think of an Italian rock band to front a slot game, but they do and it’s just awesome. This slot has it all from rewarding features to an engaging environment and it makes for quite the spectacle for the eyes and the ears. Play'n Go has a knack for combining interesting themes with captivating features and they have knocked it out of the park with the Black Mamba slot. Ready to rock out with Black Mamba?

Play Black Mamba now at the following verified UK slots sites. These slot sites are fully licenced and have been thoroughly vetted and reviewed by us to ensure they offer a great user experience, are trustworthy, secure, and have a wide variety of the best online slots in their lobbies including Black Mamba:-

Enjoyed Black Mamba? Here's a handful of similar slots we think you'll like too. These online slots have been chosen based on features and themes similar to Black Mamba. You might also want to check out other Play'n GO slots.