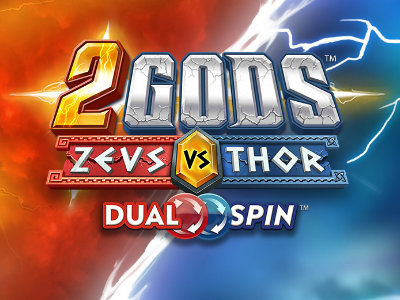 Released via the Yggdrasil YGS Masters program, 2 Gods Zeus vs Thor plays out on 5-reels with 2,048 ways to win. Developed by 4ThePlayer, this mythical slot features the revolutionary Dual Spin where plays can pay left to right and right to left.

There are also increasing multipliers of up to x20 and wins of up to 15,630x your stake. See which of these two gods remain victorious in 2 Gods Zeus vs Thor.

Jump straight into the action and play 2 Gods Zeus vs Thor now at the following fully licenced UK slot sites. These slot sites have been thoroughly audited and reviewed by the team here at Slot Gods to ensure they offer an exceptional user experience, are trustworthy, safe, secure, and boast the best selection of online slots in their portfolio including 2 Gods Zeus vs Thor...

The biggest feature in this slot has to be the Dual Spin mechanic. On each spin, you'll be given the chance to select either the colour red for Zeus or blue for Thor. Red symbols pay from left to right, whilst blue symbols pay right to left broken down into 1,024 ways to win for each colour. If a ways win colour matches the spin colour, then the payout will be doubled.

Win Spins are unlocked by landing 3 scatters. If 2 or scatters match your chosen spin, then you'll get 10 spins - if not you'll get 7 spins. You are guaranteed a win on every spin throughout this free spin mode. There's also a progressive multiplier thrown into the mix that grows every time you match your colour climbing up to x20. 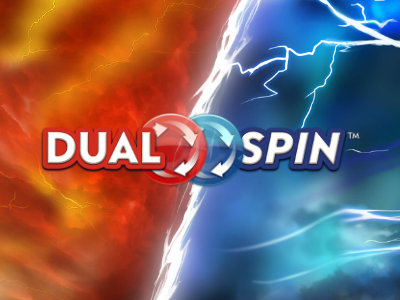 When you spin, you'll be given the chance to select your colour and if a win lands with this colour, then you'll have your payout doubled. 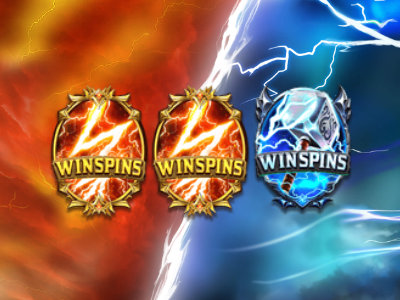 Landing 3 scatters trigger 7 guaranteed win spins, but if you manage to match your chosen colour, you'll gain 10 and an increasing multiplier.

There are multiple battles that are thoroughly epic and many are oblivious to the epic war between Zeus and Thor. Both are high ranking deities within their myths (Greek and Norse) so they decided to fight to see who's the strongest.

Developed by 4ThePlayer through Yggdrasil's YGS Masters Programme, 2 Gods Zeus vs Thor plays on 5-reels with 2, 048 ways to win. This mythical slot contains an engaging Dual Spin mechanic that gives you the chance to side with Zeus or Thor.

There's nothing insanely spectacular about the design it's decent enough in style. Both of the gods, Zeus and Thor, both look semi-realistic but with cell-shading to make them fit more into a comic book.

The gods are on either side of the screen and each has specialised symbols for their cause. They are detailed enough to clearly show you exactly whose side they are on and it's a cool touch to the slot.

There are two different spin options in this slot and each one delivers a unique epic score which is brilliant. When you aren't spinning, you'll hear ambient sounds like fighting or chanting to polish off the slot.

You may open up with this slot and be completely bewildered. On one hand, it looks simple in design, but then you notice the two spin buttons leading to further confusion. Basically, the red spin button will double Greek symbols, whilst the blue spin button doubles the Norse symbols.

The Dual Spin mechanic is phenomenal by giving you extra choice and adding extra thrills. Once you trigger the Win Spin feature, you'll be guaranteed to land wins which is brilliant.

To the right of the reels, you'll find the red and blue spin button with the bet levels underneath. Further to the left side, you'll find an additional menu leading to the paytable and game rules.

With a great RTP of 96.50%, 2 Gods Zeus Vs Thor starts off brilliantly in regards to win potential. This slot also contains high volatility gameplay leading to less frequent wins, but they'll be higher when they do arrive.

You can win a whopping 15,630x your stake throughout this slot and it's done through the Win Spin feature. Multipliers can climb up to x20 and the feature is definitely worth the wait.

From first glance, this slot doesn't look like much. However, once you've spun a few red and blue spins, you'll be hooked as the gameplay is incredible.

The Dual Spin mechanic is a genius mechanic and we hope that we see it elsewhere because it adds so much more excitement to the slot. Definitely give 2 Gods Zeus vs Thor a spin on both red and blue.

Play 2 Gods Zeus vs Thor now at the following verified UK slots sites. These slot sites are fully licenced and have been thoroughly vetted and reviewed by us to ensure they offer a great user experience, are trustworthy, secure, and have a wide variety of the best online slots in their lobbies including 2 Gods Zeus vs Thor:-

Enjoyed 2 Gods Zeus vs Thor? Here's a handful of similar slots we think you'll like too. These online slots have been chosen based on features and themes similar to 2 Gods Zeus vs Thor. You might also want to check out other 4ThePlayer slots.