Twin Spin is an iconic 5-reel, 243 payline slot developed by NetEnt that might not be jam-packed with bonus features and free spins, but does boast one of the most innovative slot mechanics to have ever existed, twin reels! This unique slot guarantees that between two and five adjacent reels will always land identical to each other, helping form winning paylines.

“ Nothing spectacular, however, the Twin Reels mechanic is a lot of fun! ”

Jump straight into the action and play Twin Spin now at the following fully licenced UK slot sites. These slot sites have been thoroughly audited and reviewed by the team here at Slot Gods to ensure they offer an exceptional user experience, are trustworthy, safe, secure, and boast the best selection of online slots in their portfolio including Twin Spin...

Twin Spin doesn't actually boast any unique bonus features or free spins for players the get lost in, instead, this incredibly simple Vegas-themed slot relies heavily on the twin reels mechanic.

If you're not sure what the twin reels mechanic is, let us enlighten you! Twin reels mean that there's always a minimum of two adjacent game reels inked together, both displaying identical symbols. This means that there's a much greater possibility of players forming a winning payline.

There's also a good possibility that on any given spin three, four or even five reels can land identical to each other, with the latter helping form those big wins that pay out1,080x the players' stake. 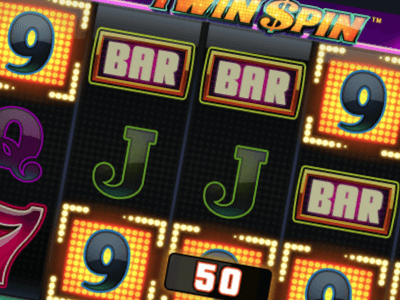 Every spin of the reels guarantees that players will see a minimum of two adjacent reels land identical to each other. There's also the possibility three, four or five reels will be identical.

Twin Spin is a classic 5-reel, 243 payline slot developed by industry giants NetEnt. This slot is well known for its unique and innovative twin reels mechanic that always guarantees that two adjacent reels are linked together, both displaying identical symbols, potentially helping form a winning payline!

If twin reels aren't quite enough for you then don't fear, there's always the chance that the twin reels can grow in and become triplet reels, quadrupled reels or even quintuplet reels!

The only way we can describe the Twin Spin soundtrack is that it's akin to the music you'd hear whilst being placed on hold on a phone call (that or elevator music)! Admittedly it's not the best, but it does kind of fit the aesthetic of the game.

Twin Spin is a traditional-style slot that's played using buttons on an action bar that can be found across the bottom of the game reels.

The only other thing players should be well aware of when playing Twin Spin is of course the aforementioned twin reels that can potentially grow into quintuplet reels.

This medium/high volatility slot has an RTP of 96.55% and can see players win up to 1,080x their initial stake which isn't groundbreaking, but for a slot released way back in 2013, we think it's probably about right if not a tad low.

There's no denying that Twin Spin is a very very simple slot, there's truly not much to it, but that's okay! The Twin Reels mechanic is a lot of fun and can prove pretty lucrative if it grows to more than two identical reels! If you don't mind playing a game that doesn't offer free spins or any other fancy features than you might just love this slot.

Play Twin Spin now at the following verified UK slots sites. These slot sites are fully licenced and have been thoroughly vetted and reviewed by us to ensure they offer a great user experience, are trustworthy, secure, and have a wide variety of the best online slots in their lobbies including Twin Spin:-

Enjoyed Twin Spin? Here's a handful of similar slots we think you'll like too. These online slots have been chosen based on features and themes similar to Twin Spin. You might also want to check out other NetEnt slots.