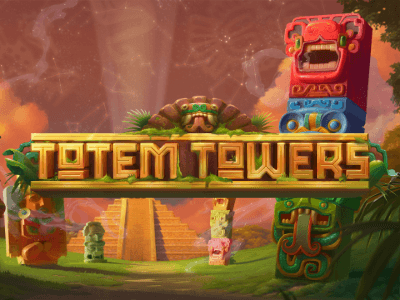 Discover the mysterious world of Maya and uncover the hidden treasure within the Totem Towers. Amazingly, you can unlock up to 101 paylines and win up to 100 free spins.

If that isn’t incredible enough, you can win the Jackpot Race or activate the Totem Tower feature. There’s so much in this tiki themed slot that it’s destined to become a cult classic.

“ With 100 free spins and 101 paylines, Totem Towers has the potential to be a classic ”

Jump straight into the action and play Totem Towers now at the following fully licenced UK slot sites. These slot sites have been thoroughly audited and reviewed by the team here at Slot Gods to ensure they offer an exceptional user experience, are trustworthy, safe, secure, and boast the best selection of online slots in their portfolio including Totem Towers...

Thankfully, Totem Towers has most of the staples needed for modern online slots. With wilds, scatters and up to 100 free spins, there are so many bonuses to help you. The biggest draw to Totem Towers has to be the expanding paylines that can go up to 101 paylines. Any spin starts with 25 paylines, but the others expand as follows:

This slot also features free spins which happen when you land 3, 4, 5 or 6 scatters. You can win up to 100 free spins during this mode! Any reel which lands with 3 symbols of matching colours will turn completely into wilds on the reels. They can be high or low, as long as they match in colour and they aren’t already wilds. Uncover the lost world of Maya and find hidden fortune within Totem Towers. This tiki themed slot has 6-reels and 25 paylines traditionally - but has the potential to open up 101 paylines.

Developed by Habanero, Totem Towers is filled with features that can give you free spins, line boosts to increase your paylines and a random fixed jackpot.

As you begin the slot, you’ll notice that the entire background is surrounded by greenery leading up to the temple. The leaves on trees move around in a hypnotic way, and the entire scene is serene. The designs of the symbols are tastefully done. Each of the totem reels has unique details that make them stand out.

You can hear tribal drum beats and chats whilst you wait between spins which adds fully to the tiki theme. It feels more like a fully realised world instead of a single slot. Even the sounds of the reels spinning fit in with the theme as it sounds very natural rather than the typical electronic sounds found in most online slots.

Whilst the gameplay might be simple - it’s a lot of fun to play. The way that the symbols spin and react with winning paylines is satisfying to watch. There isn’t much to learn with Totem Towers so anyone can pick it up.

Bet levels can be found at the bottom of the screen. They have an adjustment button to change your level - but be careful as to adjust the level loops back. It can be easy to accidentally go from the lowest bet to the highest - so take extra care.

The RTP fluctuates between 92.02% to 97.85% throughout the slot due to bonus modes and the Jackpot Race. With the top RTP being at 97.85% - Totem Towers is definitely worth playing. This is an incredible RTP that is way above the average.

Totem Towers is a medium volatility slot - so expect the middle of the road returns to vary from high payouts less frequently to lower payouts more frequently. It’s a great slot for all types of slot players.

In the game, you can win up to 10,100x your stake if you open up all the paylines with the line boost. As there are no multipliers or gamble features, that’s the highest that you can get within the main game. It’s not life-changing but it’s a decent return that’s worth playing for.

There is the Habanero Jackpot Race which is set for a certain time by the server and players have the chance to win it randomly if they play during that time. The value grows and the payout is based on the bet made by the player. Winners are paid out according to a pool such as 50% for the 1st position, 30% for the second position and 20% for 10 additional places. However, it should be noted that the Jackpot Race is only available at certain slot sites - so check beforehand.

With the chance to expand paylines to 101, Totem Tower has so much potential to become a fan favourite amongst players. The main game's maximum payout isn’t legendary but the gameplay is entertaining enough. Players engaging with the slot during the Jackpot Race could end up with some decent payouts on there if the base game payout isn’t enough for them.

It’s disappointing that there are no multipliers, but the chance to get 100 free spins is absolutely incredible. Sadly, it doesn’t beat the level of Cleopatra with 180 free spins but has the features to compete with. Honestly, even if you don’t like tiki slots, you’ll love this one. It’s perfect for beginners and veterans, so you’d be a fool to miss out on this slot.

Play Totem Towers now at the following verified UK slots sites. These slot sites are fully licenced and have been thoroughly vetted and reviewed by us to ensure they offer a great user experience, are trustworthy, secure, and have a wide variety of the best online slots in their lobbies including Totem Towers:-

Enjoyed Totem Towers? Here's a handful of similar slots we think you'll like too. These online slots have been chosen based on features and themes similar to Totem Towers. You might also want to check out other Habanero slots.