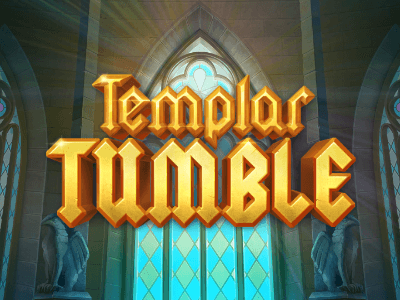 March up the cathedral steps in this medieval slot and join the Templar Knights to discover the hidden treasure.

Developed by Relax Gaming, this slot plays on 6-reels with up to 117,649 ways to win. The main draw has to be the free spins round that turns wilds into mystery symbols for instant cash prizes or even more symbols! So grab your medieval armour and sword for a mighty adventure.

“ Delightful and charming gameplay, but the maximum win is regrettable ”

Jump straight into the action and play Templar Tumble now at the following fully licenced UK slot sites. These slot sites have been thoroughly audited and reviewed by the team here at Slot Gods to ensure they offer an exceptional user experience, are trustworthy, safe, secure, and boast the best selection of online slots in their portfolio including Templar Tumble...

There aren’t a lot of features within Templar Tumble, but the features that are here have substance. Of course, the reels tumble as wins are formed but it's nothing too complicated. The free spins feature not only gives players 6 free spins but can add mystery symbols. These mystery symbols can lead to instant cash prizes of up to 1,000x your stake.

Aside from that, the slot has a feature to allow players to buy into free spins. However, this may not be available in all territories.

Managing to destroy all the blocker symbols in the base game which activate 6 free spins. No blockers will be present throughout and if wilds land, then a number of normal symbols will be transformed into mystery symbols. These symbols continue until no more wins are awarded.

If wilds fall onto the reels, a number of symbols will change to mystery symbols. They ultimately remain on the grid until no further wins are awarded. It’ll either turn into a normal symbol or a coin symbol that’ll award a cash prize.

Templar Tumble gives players the chance to buy into free spins with 80x their stake to directly activate the feature. Note that this may not be available in all territories, so make sure to double-check first.

Medieval knights were arguably the most feared and protected warriors during the time period. They were more than soldiers and became elite members of society due to the amount of respect they commanded. Templar Tumble takes this mentality and combines it to create a mythical slot all about the Templar Knights.

Developed by Relax Gaming, Templar Tumble plays on 6-reels with up to 117,649 ways to win. Players must join the Templar Knights and guide everyone to victory in order to find the hidden treasures. Through free spins and the mystery symbols feature, players will have a decent chance to win and impress the Knights whilst doing so.

From the offset, it’s clear that Templar Tumble is a well-designed slot. The background features a bright landscape of blue skies mixed with a medieval cathedral. To the left of the reels is one of the Knights with a fearsome creature to the right.

Now, the symbols on the reels seem like medallions and crests which feels right at home with the cathedral. During free spins, players are transported inside the cathedral and get a glimpse of the beauty inside. With stained glass panels and gorgeous statues, it feels like a legitimate cathedral.

As expected, the music is medieval in style with soft lutes and chanting. It’s reminiscent of Dark Souls mixed with The Witcher 3 to create something magical but inspiring as well. When symbols match, it sounds like a sword sheathing or swords colliding. Ultimately, it comes together to create something impressive.

Like other games with a tumble mechanic, the gameplay is actually easier than traditional slots. Wins are created by matching symbols regardless of vertical position, so it’s more attainable to land wins.

To the bottom left, players will find all the relevant gameplay settings from paylines to all the sound options. The spin button can be found at the bottom of the reels in the middle with the autospin next to it. If you are wanting autospins, you can set between 10 and 1,000.

Templar Tumble is a medium to high volatility slot with a solid RTP of 96.26%. The maximum wins for this slot come from the Mystery symbol feature which can award players an instant win of 1,000x their stake. Sadly, this is the most that players will probably get from this slot.

For a tumble slot, Templar Tumble is loads of fun and will definitely entertain players. The design is clean but visually appealing with the gameplay being exciting.

Sadly, the slot starts to lack when it comes to features and that is the ultimate letdown. This paired with the low maximum win makes Templar Tumble a slot that will sadly end up forgotten about. If you love medieval slots or anything mythical, be sure to check out Templar Tumble as it has some gratifying moments.

Play Templar Tumble now at the following verified UK slots sites. These slot sites are fully licenced and have been thoroughly vetted and reviewed by us to ensure they offer a great user experience, are trustworthy, secure, and have a wide variety of the best online slots in their lobbies including Templar Tumble:-

Enjoyed Templar Tumble? Here's a handful of similar slots we think you'll like too. These online slots have been chosen based on features and themes similar to Templar Tumble. You might also want to check out other Relax Gaming slots.