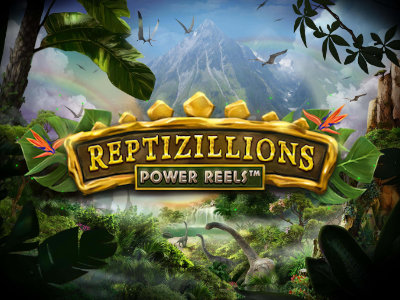 Get ready to lead the horde of Dinosaurs in Red Tiger Gaming's Reptizillions Power Reels. Amazingly, the slot plays on 8-reels with 30 paylines and gives players the chance to win up to 4,000x stake.

There are even free spins, super symbols and locked dinosaur symbols to help you gain a legendary payout! So join this pack of prehistoric animals for Reptizillions Power Reels.

“ A fascinating concept but fails to deliver decent wins ”

It all begins with the Super Symbols which can land on the reels at any time and will lock into place. These will then move to the left with each spin with the potential to bring in other high paying symbols that are adjacent to them to create hordes for bigger payouts.

Aside from this, there are free spins in this slot that can be triggered by landing 3 or more free spin symbols. A dinosaur will be chosen at random with up to 3 corresponding super symbols added to the reels. During the free spins round, locked dinosaur symbols that leave will reappear on the right.

When the big symbols, aka the Super Symbols, land on the reels, they will lock into place and move left with each spin. Higher paying symbols lock in to create a horde with other matching dinosaur symbols.

You trigger this round by landing 3 or more free spins symbols on the reels. During this mode, a dinosaur will be chosen at random with up to 3 symbols added to the reels with locked dinosaurs appearing as well.

In prehistoric times, dinosaurs ruled the world and that's exactly the case in Red Tiger Gaming's Reptizillions Power Reels. Playing on 8-reels with 30 paylines, this stone age slot has two main features which include Super Symbols and Free Spins that all contribute to helping you gain the maximum payout.

The Super Symbols lock into place and move to the left with each spin - they can even match with higher paying symbols to create hordes for bigger wins. So, get ready to lead the horse in Reptizillions Power Reels.

The reels contain symbols that include different dinosaurs along with traditional playing card symbols transformed into something more prehistoric.

In between spins, there are ambient noises such as birds and other creatures - but the music picks up by the time you start spinning. It's whimsical mixed with a grand scale to create something epic and sounds like a knock-off Jurassic Park theme.

Aside from the Super Symbols, the gameplay is relevantly formulaic and expected for an online slot. Don't worry about the slot being complicated or hard to follow as it's just like any other slot but with more reels and moving symbols.

Everything needed can be found at the bottom of the screen with the spin button to the far right. The bet level and autospin button are just to the left of the reels with all the other menus just underneath.

According to the developers, you can win up to 4,000x your stake by landing the colossal dinosaur symbols from the main bonus. Sadly, 4,000x your stake isn't exactly a mind-blowing amount and even more disappointing considering the mediocre RTP of 95.69%. Reptizillions Power Reels is a high volatility slot - so expect payouts less frequently but bigger when they do.

Honestly, the design and core gameplay are solid enough to create something that could've been iconic and an instant classic to slot fans. The big letdown comes from the meagre 4,000x your stake that can be won on this slot.

If you love dinosaurs and stone-aged slots, then give Reptizillions Power Reels a spin. However, we definitely recommend Dinopolis for a better dinosaur experience with an amazing 50,000x your stake to be won!