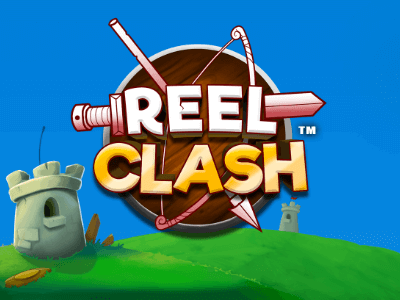 It’s time for a clash of epic proportions as two different sides fight a tug of war style battle to see who is the better king. Developed by SG Digital, Reel Clash sees two sides battle in hopes of raising the clash meter.

Once the clash meter has grown, players can choose which symbols they win to upgrade. If that wasn't enough, then how about a free spins round that adds 20 extra paylines.

Reel Clash is all about the battle between two different castles, so naturally, it’s all about the clash meter and battles. Aside from that, the slot features wilds and scatters to do their usual thing.

If the clash meter reaches the top, then players can upgrade a symbol. 5 of a kind wins for the upgraded symbol will pay out even more. Each symbol can be upgraded by at least 1 and can only be upgraded to 3 stars.

However, if the clash meter reaches the bottom, then an upgraded symbol will lose a star instead.

During the base game, if the player manages to land 3 scatters then there is a chance that the player will gain a free upgrade and receive a star.

After every spin during the base game and free spins, a battle will take place with each symbol contributing to points. Depending on which side wins, the clash meter will lean towards that side. Once the meter reaches the top, players can upgrade a symbol of their choice.

Throughout medieval times, many different kingdoms battled for dominance to prove that they were the better kingdom. SG Digital’s Reel Clash is no different as you take control of the reels and hope to fill up the clash meter by winning battles.

Reel Clash contains both action and adventure elements to make it feel like an exhilarating slot full of so much excitement. Players begin with 5-reels and 30 paylines, but amazingly the paylines can expand to 50 during the free spins round. The upgraded symbols and expanding paylines during free spins are just the start.

The overall design of the reels and characters is reminiscent of the Carcassonne board game as the designs are a mixture of realistic with cutesy animation. Similarly, the characters lean more towards an animated design which makes the slot seem like an early PlayStation 2 game. It adds completely to the experience and makes it more exciting to play.

Amazingly, the background is animated with moving clouds and moving flags. The background is simple in style but has some intricate details. For example, the castle is basic but has cell shading and shadows to add an extra bit of detail.

Whimsical adventure music that you’d expect from any Hollywood adventure film. It begins low with soft piano and flute noises at the start but grows louder and more intense as you begin to spin. Overall, it fits in well with the design whilst adding even more to the aesthetic.

This is where to slot become really amusing. After each spin, the top and the bottom of the reels fight in a tug of war battle. This can result in adding a star to the clash meter or players losing a star. It’s thoroughly entertaining and is completely unique in adding more action to the slot.

Despite this, the gameplay is still straightforward and there is nothing confusing to it. Similarly, menus can be found at the bottom of the reels. You literally can’t miss the spin button as it’s centred with the autospin and bet level next to it.

According to the developers, the maximum win for this slot is 250,000 - so don’t expect anything higher. High wins can be made through upgrading symbols to gain multipliers and expanding the paylines during the free spins round.

There’s no denying that the gameplay and design showcase loads of fun and creativity. Whilst the graphics may seem a little dated for some, it has a nostalgic charm for many. Of course, the maximum win payout of 250,000 isn’t something to scoff at.

If you enjoy medium volatility slots filled with delightful mechanics and design, then Reel Clash is one to check out.

Play Reel Clash now at the following verified online slot sites. These slot sites have been thoroughly audited and reviewed by us to ensure they offer an exceptional user experience, are trustworthy, safe, secure, and boast the best variation of online slots in their portfolio including Reel Clash:-

Enjoyed Reel Clash? Here's a handful of similar slots we think you'll like too. These online slots have been chosen based on features and themes similar to Reel Clash. You might also want to check out other SG Digital slots.