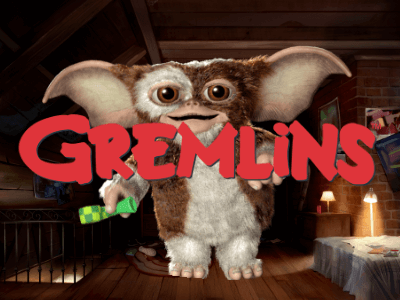 There’s not many films that can say they blend black comedy with Christmas, but somehow Gremlins does. Based on the cult classic film, this slot brings all your favourite creatures with Gizmo and Stripe at the forefront.

Not only that, but you have 1 of 5 bonus rounds to help you with your playthrough. With 3 different free spins modes and multipliers, you’ll absolutely love this slot.

Jump straight into the action and play Gremlins now at the following fully licenced UK slot sites. These slot sites have been thoroughly audited and reviewed by the team here at Slot Gods to ensure they offer an exceptional user experience, are trustworthy, safe, secure, and boast the best selection of online slots in their portfolio including Gremlins...

The main draw to Gremlins has to be the Bonus Selector that gives players the chance to pick 1 of 5 bonus features. From free spins to multipliers, there is literally something for everyone. Not only that, but you have Stripe wilds that multiply on the reels and randomly replace symbols at the end of a spin. This can lead to even bigger wins for you during your playthrough. Wild symbols can be replaced by Gizmo bonus scatters during the base game. Landing 3 Gizmo bonus symbols activates the Bonus Selector and can give you 1 of 5 bonus features. These include: Splashing Wild, Gremlin Link, Avoid the Sun, Gizmo Box Hunt and No More Cash After Midnight. During this bonus feature you’ll win 8 free spins and any wild that lands on the reel will expand to cover it entirely. Land 3 Gizmo bonus symbols on reels 1, 3 and 5 to win an additional 8 spins Starting with 3 lives, you lose each time you fail to see a Stripe symbol. Each Stripe symbol contains a cash value that adds up at the end of the feature. The 6th reel contains a Gizmo multiplier symbol that varies from 2x, 3x to 5x. Unlimited free spins are awarded for this feature with the chance to unlock persisting wilds after 8 winning spins. This feature will end once 11 or more sun symbols land on the reels. In this round, you have 4 levels with 9 different boxes to choose from. You have the option of choosing ‘Level Up’ to gain cash and continue, or ‘collect’ to end the round. No More Cash After Midnight

You spin the clock to reveal a number of spaces for Gizmo to move along this trail with each containing a multiplier. Choosing 1 to 11 will move Gizmo safely along the trail. The segment ends once the clock lands at midnight.

Based on the cult classic film of the same name directed by Joe Dante, Gremlins is an online slot that takes full inspiration from its source material. Including both visuals and sounds from the film make this a TV/Movie slot that is worth your time.

Playing on 5-reels with 20 paylines, Gremlins has a multitude of features to assist you in winning. Make sure to avoid water and definitely don’t feed any of these creatures after midnight if you are playing this slot.

The setting of the slot takes place in Billy Peltzer’s room from the film. However, this is definitely his room after he mistakenly spills water on his new pet mogwai called Gizmo. Many spawns have come and hatched eggs all around the room. The area is now covered with creepy eggs containing the evil type of creatures called Gremlins.

Visually, it matches the black comedy feeling of the film whilst keeping it wholesome to match the Christmas theme too. You’ll notice bright Christmas lights and other subtle references to the greatest time of the year. It blends well with the darker tone to create something wholly unique to the film Gremlins. The symbols on the reels have a retro feeling to them that’ll bring you straight back to the 80s. They almost look directly from cartoons. It’s a detail that fits well within the Gremlin world.

Throughout your playthrough, you’ll recognise the main theme from the movie by Jerry Goldsmith playing as you spin the reels. It continues but dies down a little bit whilst you are idly waiting on the game. Not only that, but you’ll hear sounds from all the villain Gremlins which’ll most definitely send chills down your spin. Just what you’d expect from a Gremlins’ game.

What you see is what you get with Gremlins. You have to set your bet and spin - that’s all there is to it. Of course, they have bonus feature modes - but they are all clearly explained and easy to follow. The help menu is at the bottom left of the screen with over 25 pages to help you on how to play. You’ll find the spin button centered just underneath the reels with the autospin button to the left. Players can choose between 10 and a 100 autospins during their playthrough.

Gremlins is a medium volatility game that appeals to both veteran and novice players. It has a respectable RTP at 96.47% - which is just above the average meaning that the gameplay is quite balanced. Sadly, the maximum base return is 100x your stake by landing 5 wilds. You can win up to 500x your stake with multipliers in the free spins rounds - but that’s all you can get.

Everyone loves the bonkers Gremlins’ film as it blends black comedy with Christmas. It wasn’t afraid to push boundaries and people loved that. Whilst Red7’s Gremlins brings in the atmosphere from the film, it lacked a killer win potential. The gameplay is entertaining enough with the bonus features but it’s let down by the lack of high payouts.

Don’t let this put you off if you love branded slots, as Gremlins is up there as one of the best TV/Movie slots out there. It just fails on the last hurdle making it a great game rather than an incredible one.

Play Gremlins now at the following verified UK slots sites. These slot sites are fully licenced and have been thoroughly vetted and reviewed by us to ensure they offer a great user experience, are trustworthy, secure, and have a wide variety of the best online slots in their lobbies including Gremlins:-

Enjoyed Gremlins? Here's a handful of similar slots we think you'll like too. These online slots have been chosen based on features and themes similar to Gremlins. You might also want to check out other Red7 slots.