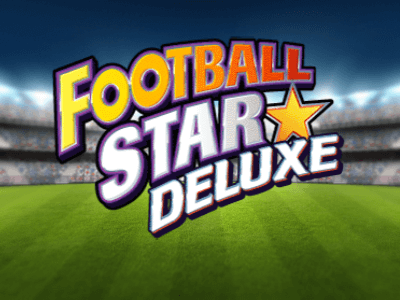 After the success of the 2014 Football Star, Microgaming decided to revitalise the slot and release the improved Football Star Deluxe.

Amazingly, you can play with 18, 38, 68 or 88 paylines with various features to help you throughout your playthrough. So, return to the pitch in Football Star Deluxe.

“ Full of innovative features, Football Star Deluxe is one not to miss ”

It all begins with the Rolling Reels which means that you can win multiple consecutive wins and the winning symbols are removed to make way for newer symbols. This slot also features traditional wilds, but they super stack as well. At any time during the base game, football players can randomly appear and turn reels 2, 3 or 4 wild for a guaranteed win.

There is also a free spins round that is triggered by landing 3 or more scatters. This leads to growing wilds and a multiplier trail that increases with each roll. The multiplier starts at x2 but can grow up to x8. Now, the growing wilds are super stacked on reels 2 to 5 during free spins and grow by 1 with each spin.

Like most slots, if you land 3 or more scatters, then you can trigger up to 12 free spins. This feature also has growing wilds and a multiplier trail.

In 2014, Football Star was released and fans loved it. Microgaming had released a sport themed slot that focused fully on football. After the success of the original, they decided to improve upon the original and release the much-better Football Star Deluxe.

Stormcraft Studios collaborated with Microgaming for this slot, and it plays on 5-reels with 18 to 88 paylines. You can win through multiple wilds or the free spins round and possibly win up to 3,200x your stake in this slot.

The background features a blurred audience and centres on a football pitch. Naturally, the reels are in the middle of the pitch with various different football-inspired symbols.

Throughout the slot, you'll notice a subtle beat in the background which is a little funky and odd - but it's enjoyable to listen to. There's no denying that Football Star Deluxe isn't the best-designed slot out there - but it's charming enough to enjoy.

You can select your paylines starting at 18 and growing up to 88 paylines. Aside from that, the gameplay is straightforward and just like any other online slot. All the other menus needed can be found on the right side of the screen with the spin button in the middle.

This slot is a high volatility slot with an RTP of 96.77% - which is pretty high. It's definitely a slot for high rollers with the bankroll to sustain themselves. The most you can win in this slot is 3,200x your stake - which can be won by landing the x8 multiplier in the free spins round.

We're not surprised that Microgaming delivered a solid slot with superb features and engaging gameplay. Whilst the visuals aren't anything special - they do what they need to do. Football Star Deluxe will not be a slot that shakes up the slot world, but it'll provide fun gameplay for football fans.

If you love football and don't mind a lower maximum payout, then Football Star Deluxe is worth a spin. However, if you fancy a bigger payout, then try out the Sporting Legends Jackpot series instead.