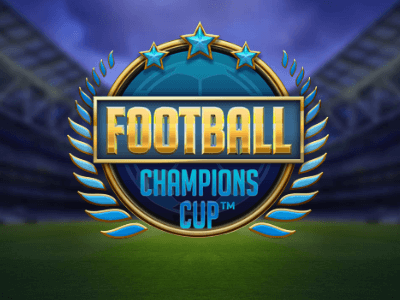 Lucky players that manage to get past their opponents can win up to 1,000x their stake. Do you have what it takes to become a champion?

Ultimately, the biggest goal for this slot is to trigger the Penalty Shootout Bonus which can be activated by landing 3 or more bonus symbols. You then take part in a mini-game to score against the opposing team and save goals from the opposing team. This keeps going until one team wins and the increasing multipliers can go up to 16x.

The second biggest feature comes from the Free Spins Tournament which you battle in mini-games to decide who is the winning team. You can gain up to 4 free spins but the main goal is the gain the cash prizes. Of course, there are wilds in this slot and they can be randomly added at any time with up to 5 wilds placed on the reels.

If you land 3 or more bonus symbols on the reels, then you'll trigger this feature. You pick 1 of 4 positions to try and score or save the ball with cash prizes and multipliers in this mode.

Managing to land 3 or more cup scatters in the middle reels with take you to the free spins tournament which is a lockout. There's a mini-game in which you score and hope to land in the final for a huge cash prize.

In 2016, NetEnt was inspired by the current Euro Cup and decided to give the world a chance to experience its own football tournament. Playing on 5-reels with 20 fixed paylines, Football: Champions Cup is a sport slot with a maximum payout of 1,000x your stake.

There are two main features in this slot, and they include the Penalty Shootout Bonus and a Free Spins Tournament. It's up to you to see if you can bring football home to your chosen country in Football: Champions Cup.

In the background, there is a football with various crowds and supporters in the stadium. Unfortunately, nothing is animated and there is no visual life to the base gameplay with the symbols on the reels or the background. Thankfully, this changes during the bonus rounds and it becomes more animated bringing more life to the slot.

There are ambient cheers and other noises mixed within soft music as to not distract the player too much. The whole sound mixing is pretty solid and builds up a decent atmosphere for an intense football match.

As the slot opens up, you decide on which country you wish to represent. This is a nice little detail but doesn't add too much to the gameplay as the rest of the slot is pretty traditional.

All the menus can be found at the bottom of the screen with the spin button in the middle with the autospin just next to it. You'll notice other menus to the left such as sound or other general settings you could need.

Throughout the bonus rounds, you can win cash prizes with the maximum being 1,000x your stake (according to the developers). It has a medium to high volatility level, which usually expects a bigger payout so this is a little disappointing. On the other hand, the RTP is at a solid 96.82% which is fantastic for online slots.

Of course, if you are looking for a bigger payout, then definitely check out the Sporting Legends series with a progressive jackpot attached.