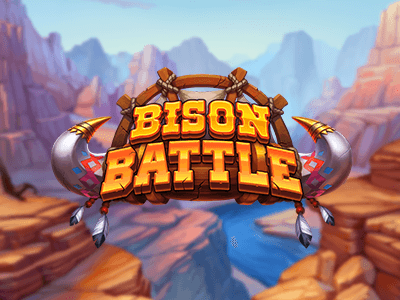 Bison are the largest mammals in North America with their gigantic heads, massive horns and shaggy fur. These marvellous creatures have wowed Americans for centuries and it's no surprise that Push Gaming has dedicated a game focused on these animals.

Playing on 5-reels with 20 paylines, this high volatility animal slot contains a whole bunch of features including Ice Park, Green Valley and Bison Clash leading to wins of up to 50,000x your stake. If you love animal slots with a bite, then Bison Battle is one not to miss.

There's so much to unpack in this animal slot and it all begins with the Green Valley Feature. This is triggered when the Green Bison and any Red Bison with a multiplier are in view on the same row. When this triggers, both symbols clash together.

This triggers 8 free spins with a multiplier attached (between x2 to x10) lands on reels 1 and 5. During this mode, the Wild Bison symbols only land on reels 2 to 4 and remain sticky throughout.

The Red Bison symbol with a multiplier (value between x2 to x10) lands on reels 1 and 5. The Bison Coins are instant prizes symbols and are sticky but can only land on reels 2 to 4. Once you manage to land a symbol, the counter resets to 3 like many popular respin mechanics.

As you can imagine, there's a Bison Battle feature that is triggered with an instant prize when the Red Bison with a multiplier is as in view with another Red Bison. When this is triggered, both Bisons clash and the prize is awarded with the multiplier applied. 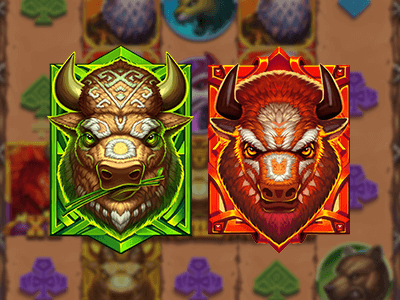 This is activated by landing the Green Bison with the Red Bison with a multiplier on the same row. You'll trigger 8 free spins with sticky Wild Bison and multipliers on reels 1 and 5. 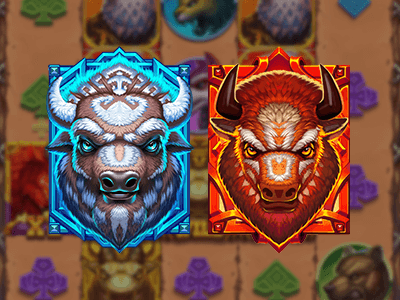 Similarly, you can trigger the Ice Park Feature by landing Blue Bison with a Red Bison with a multiplier to award 3 spins. This gives a respin mechanic that retriggers with every symbol that lands.

After the colossal slot that was Fire Hopper, the team at Push Gaming decided to create something a little more grounded focused on the battles between Bison. Bison Battle is an animal slot that plays on 5-reels with 20 paylines featuring high volatility gameplay.

In true Push Gaming style, you can expect to find top-quality graphics followed by stellar gameplay with features such as Green Valley and Ice Park. For those of you who love animal slots, but want something a little more aggressive, then Bison Battle is one to check out.

Whilst this subject matter isn't anything too exciting, that hasn't stopped Push Gaming from making something creative out of it. You'll find yourself in a canyon with the reels at the forefront of a big drop.

Surrounding the screen, you'll encounter arrows and a variety of weapons associated with Native Americans. On the reels, there are Bison but then a variety of other animals such as eagles and bears to make it feel like America.

All of the sounds in this slot are entirely epic with drums and woodwind instruments building up suspense making it feel like an adventure. This is definitely something you'd find in a Hollywood blockbuster.

Thankfully, the overall gameplay for this slot isn't too confusing despite having a huge set of features. Most of the features are triggered by landing the Red Bison with the multiplier and that's all there is to it.

On the bottom of the screen, you'll notice the spin button to the right followed by the bet level and the additional menu to adjust sound and other avenues.

It's rare that Push Gaming disappoints with the win potential of the slots they release and Bison Battle is another winner. With a high volatility level, you can find yourself landing larger wins but less often meaning that you might have to be patient for wins.

Alongside this, there's a high RTP of 96.40% followed by an extraordinary maximum win of 50,000x your stake. The big wins come from the multipliers and the bonus rounds which we found to trigger a fair amount during our 400 spins.

The animal theme in slots is often one that is either loved or hated by players. Bison Battle tries to close the gap between fans of the genre and those who aren't by creating wonderful gameplay and features that will delight.

Of course, it helps that the visuals and overall design is quite fantastic and definitely keep up Push Gaming's high standards. There's also the win potential to consider as it's perfect for high rollers and we imagine players will be happy with the large wins at stake.

Animal slot players will adore Bison Battle and therefore should check it out - but we also urge all slot enthusiasts to give this slot a spin as the free spin, respin and win potential are too good to miss.

Play Bison Battle now at the following verified online slot sites. These slot sites have been thoroughly audited and reviewed by us to ensure they offer an exceptional user experience, are trustworthy, safe, secure, and boast the best variation of online slots in their portfolio including Bison Battle:-

Enjoyed Bison Battle? Here's a handful of similar slots we think you'll like too. These online slots have been chosen based on features and themes similar to Bison Battle. You might also want to check out other Push Gaming slots.