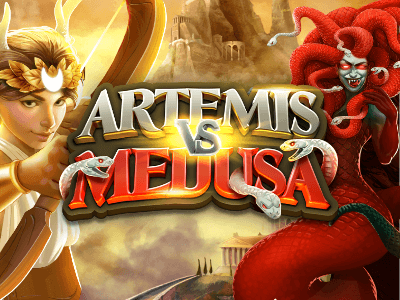 Join the Greek Goddess Artemis as she takes on the infamous Medusa in this epic battle. Developed by Quickspin, this mythical slot plays on 5-reels with 1,024 paylines to win the maximum 5,288x your stake.

With Bounty Coins giving cash prizes and an Unlimited Battle Free Spins feature - you’ll have the Greek Gods on your side in this slot.

Artemis vs Medusa is all about the Ultimate Battle Free Spins. There are scatters and wilds, but the slot leads up to the free spins with a battle between Artemis and Medusa. You can also win extra with the Monster Bounty Coin feature that gives medium monsters coins with extra value. 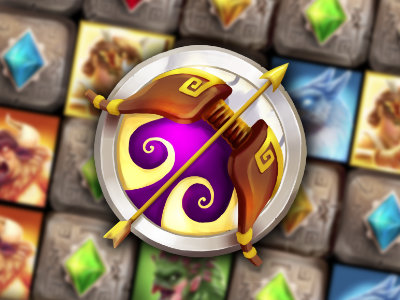 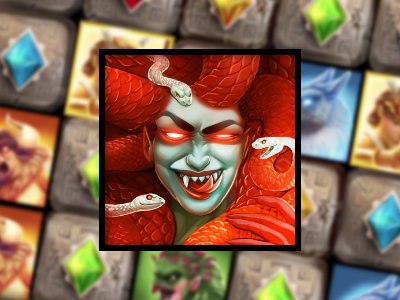 Unlock Unlimited Battle Free Spins if you roll 3 bonus scatters. This bonus round lasts under the battle between Artemis and Medusa resolves on screen. During the battle, the meter increases depending on the monster symbols collected. If the meter goes beyond 15, then Artemis retreats and free spins finish. 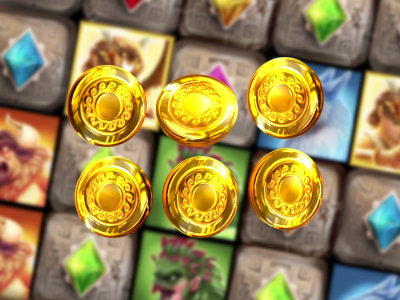 During the base game, any medium symbol can have a coin symbol on. These symbols include Harpy, Griffon, Minotaur and Medusa. Monster Bounty Coins are paid out after an Artemis symbol with a golden frame lands on the reels.

There are many slots out there chronicling Greek mythology, but none that have a specific focus on Artemis and Medusa battling it out. In this mythical slot developed by Quickspin, Artemis and Medusa fight in this 5-reel, 1,024 paylines slot.

Artemis vs Medusa is a medium volatility slot with a maximum win of 5,288x stake during the Ultimate Battle Free Spins.

Like most mythical slots, the background is a famous location within the myths. The setting of this one is Medusa’s home island of Sarpedon in the Western Ocean near the Hesperides. Reels are surrounded with ominous mist and statutes throughout the island.

The main stars of the slot, Artemis and Medusa, are given realistic avatars on the reels with a little cartoon flair. Other monsters are given the same treatment and make the slot seem more grounded rather than over the top.

There is nothing wrong with the score, but it does get a little repetitive. Drum beats mixed with soft sounds to make a traditionally epic score sounds great on paper but can get a little tedious after a few minutes. The biggest issue has to be the change in sound quality during wins as it increases tremendously. Just be aware and keep your volume at a decent level.

Gameplay wise - Artemis vs Medusa is just like any other slot with a few extras thrown in. The Ultimate Battle Free Spins and Monster Bounty are the most innovative editions. They are simple to follow though as the slot instructs you as you go. If you need any settings or help during your playthrough, you’ll find them at the bottom left.

Quickspin have a good reputation with their RTP often being above the average and fair to players. The RTP of Artemis vs Medusa is at a great 96.17% meaning the theoretical return to players is pretty decent.

Sadly, the maximum base payout is 25x your stake by spinning 5 of the Artemis symbols. You can win up to 5,288x your stake during the Unlimited Battle Free Spins if you manage to defeat all of the monsters and survive to the end.

Any online slot fan will know that the Age of the Gods series dominates the mythical genre - but Artemis vs Medusa manages to hold its own. Sure, it doesn’t have a mighty progressive jackpot - but the features are cool enough to satisfy slot fans. The biggest payout is 5,288x your stake - which may be the biggest disappointment for some slot enthusiasts.

Don’t let that put you off completely as the gameplay mechanics are pretty cool with the Unlimited Battle Free Spins and Monster Bounty Coin system. Artemis vs Medusa has fun gameplay that’ll leave you entertained - just don’t expect a cult classic.

Play Artemis vs Medusa now at the following verified online slot sites. These slot sites have been thoroughly audited and reviewed by us to ensure they offer an exceptional user experience, are trustworthy, safe, secure, and boast the best variation of online slots in their portfolio including Artemis vs Medusa:-

Enjoyed Artemis vs Medusa? Here's a handful of similar slots we think you'll like too. These online slots have been chosen based on features and themes similar to Artemis vs Medusa. You might also want to check out other Quickspin slots.