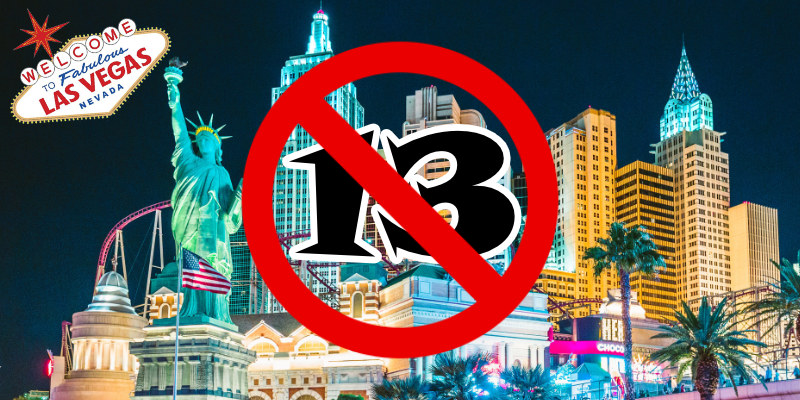 In every culture around the globe there are strange superstitions that dictate how people live their day-to-day lives, many of these superstitions cross over into the world of gambling.

Whether it's as simple as not saying a certain word whilst at the table or as elaborate as missing out an entire floor on a building, these superstitions are widespread and can be witnessed in action in casinos outside of their original country of origin.

Settle down, make yourself comfortable and prepare yourself for 10 very odd gambling superstitions that players believe dictate luck. If you feel like you've psyched yourself out reading this article and need a bit of luck when playing online slots then maybe check out our article on the weirdest lucky charms in gambling, you never know... It might help you out!

China - Wearing red to the casino

In China (and Native American culture) red is considered an incredibly important colour that brings wealth, luck and prosperity. At Chinese New Year people often give children, friends, family members and colleagues red envelopes stuffed with money... So it's not hard to see why the colour is associated with lining your pockets with cash.

If you were to head into any casino in Macau or Hong Kong right now you'd likely find that the majority of the decor would be red... This superstition stretches further afield than Asia though, Chinese nationals that visit casinos all around the world will usually continue the tradition by wearing an item of red clothing whilst they're gambling.

Here's another strange superstition from China... Most people completely avoid gambling when there's someone reading a book nearby! We suspect this superstition stretches back to many moons ago when players gambled socially with their friends and families playing games such as Mahjong and Pai Gow.

Why do people do this? Well, it's because the Chinese word for book (书 - shū) sounds very similar to the Chinese word for lose (输 - shū)... It's a big cultural no to take a book anywhere gambling is present, and in addition to this, some people even refuse to receive books as gifts!

Back in the early days of Las Vegas casinos, when these elaborate resorts popped up en-masse, the vast majority of them were built without a 13th floor. As ridiculous as it sounds, this is for the exact reason you're thinking! Casinos were built without a 13th floor because the number is considered unlucky, and what kind of guest, visiting with the sole purpose of getting lucky, would want to stay on an unlucky floor?

Strangely, this superstition actually stretches further than Las Vegas, there are many casinos across the United States that completely skip the 13th floor, opting to go straight to 14 (or 12a) instead. These old superstitions are dying though, in this day and age many modern Las Vegas casinos such as the MGM Grand, Excalibur and the Luxor.

United States - Take your mojo bag to the casino

Sometime in 19th Century New Orleans, Louisiana, gamblers began to believe that they would never lose when gambling if they carried their own mojo bag. A mojo bag is a small bag filled with items that are considered lucky or considered lucky upon being combined.

Traditionally, these bags are filled with herbs, roots, stones, incense and bones... Men traditionally kept their mojo bags in their pockets whilst women would clip them to their bra. If anyone carried a bag of bones and stones into a casino in this day and age we imagine they'd be escorted off the premises quite quickly!

Greece/Italy - If you see a hunchback you're in luck

This superstition is a bit of a strange one, as in some cultures hunchbacks is considered sheer bad luck, what's more unlucky than being born with a debilitating health condition? However, in ancient Greek and Roman culture hunchbacks were in fact considered very lucky!

Greeks and Romans often depicted hunchbacks in great sculptures and works of art... Many believed that rubbing a hunchbacks hump would bring them nothing but good luck. There are newspaper articles from the late 1800s that talked about how hunchbacked girls used to hang around Monte Carlo casinos offering players the opportunity to rub their hump with a gold coin for a franc.

Indians, like the Chinese, are deeply spiritual and superstitious people... Such so that some Indians will refuse to do certain things on certain days to avoid bad luck and omens.

Many Indians will not cut their nails on Tuesdays, Thursdays or Saturdays... Nor will they cut their nails after dark (for fear of evil spirits). Having your hair cut on Thursdays or washed on Saturdays are also moves that might encourage poor luck... The days of the week these superstitions revolve around might change in certain parts of the country, but the general concern still stays the same.

A popular Serbian superstition that's also pretty popular elsewhere around the world (including the United Kingdom) is that when the palm of your left hand itches, then you're going to come into some money. It's common amongst Serbians that when their palm does begin itching, the first place they tend to go is the casino as their time to rake in the winnings has come!

On the other hand... (pun absolutely intended) if your right hand itches at any time Serbians believe that you're going to part with money in the very near future. So make sure you get the correct hand before you head through the doors of your favourite casino!

Worldwide - Leaving the table during a spin

If you head to practically any roulette table, at any casino, anywhere in the world you'll spot people swiftly stepping away from the table as soon as the wheel begins spinning. This is because there's a firm belief amongst many gamblers that if they watch the wheel spin they're going to experience a losing outcome.

The hope is that they'll walk back to the table and find that their number has come in... However, as popular as a superstition this is, maybe it's just that people are nervous and don't want to watch their money disappear!

In the world of craps it's a common superstition that nobody should ever say the word seven while the shooter is throwing their dice. This is because rolling a seven is an automatic loss for the person throwing, if someone says the dreaded 's word' then it almost feels as if the loss was pre-empted.

In addition to this craps players also don't like it when the dice are handed directly to them with a seven showing. This superstition is so well known that it's practically turned into common etiquette worldwide.

Worldwide - Don't count your money at the table

Legendary country and western artist Kenny Rogers famously sang never count your money at the table in Grammy award-winning song 'The Gambler'... This superstition is very true amongst gamblers around the world. It's considered both bad luck and poor etiquette to sit at the table and count your chips.

Doing so will not only get you some shifty looks from the people around you (who might be down on their luck) and it might also set you on your way to losing all the cash you've earned so far...