“ Get groovin’ with features such as free spins and sticky wilds ”

There are three major bonus features and mechanics in Jammin’ Jars that players should be aware of. Firstly, there’s the Jammin’ Jar symbol that can fall onto the game grid at any time.

These smiley jar symbols will have a multiplier added on top which increases up to 5x following every single winning combination. This symbol is also used as a scatter symbol.

If three Jammin’ Jar symbols fall into play at any given time then players will automatically trigger a free spins round. During this bonus round, any jars that are already part of winning combinations will be held in place, which could potentially lead to huge wins.

Finally, there’s the Rainbow feature, which can be triggered randomly at absolutely any time. Here players will see giant fruit symbols added to the game grid which counts as four symbols rather than just one. 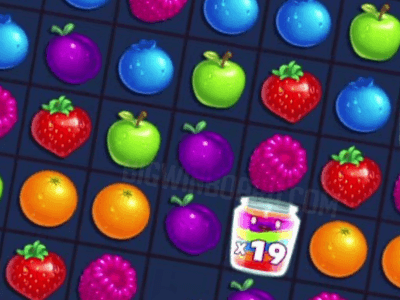 Jammin' Jar symbols can fall onto the reels at any time with multipliers added on top. The Jammin' Jar also acts as a scatter symbol. 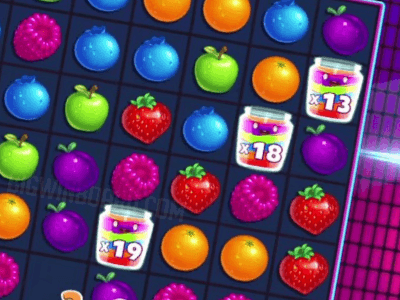 If 3 Jammin' Jar symbols fall onto the reels a free spins round will trigger. Any jars that were already on the grid will be held in place. 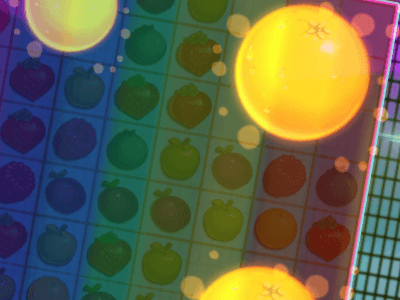 The rainbow feature sees giant fruit symbols added to the grid which count as four symbols. This can be randomly triggered at any time.

Jammin’ Jars is a groovy disco-themed cluster pays slot from Push Gaming that’s proved to be a huge hit with online slot streamers and YouTubers. Its success is undoubtedly down to its innovative gameplay and bonus features such as collapsing symbols and multiplying wilds.

Jammin’ Jars is played on a bright, vibrant dance floor surrounded by shiny tiles and a big disco ball! An upbeat disco soundtrack plays in the background as you spin the reels.

The six base game symbols are all different fruits (from lowest value to highest): Blueberries, plums, apples, raspberries, oranges and fruit. The special wild symbol is a smiley jam jar.

If we’re being completely honest there’s really not too much else to say about Jammin’ Jars, it’s all very simple in the way it looks and sounds... But that certainly isn’t a bad thing in our opinion!

Wins in Jammin’ Jars are achieved when five or more matching fruit symbols are touching vertically or horizontally. When a win is registered the fruit symbols are removed and new ones fall onto screen to fill the gaps that have been left.

Considering Jammin’ Jars has no reels or paylines, players don’t bet per payline, instead, they make a straight-up fixed bet ranging from 0.20 to £100. Players can autoplay a maximum of 100 spins if they don’t wish to make individual ones.

This highly volatile slot (with an RTP of 96.8%) can either be incredibly frustrating or absolutely wonderful. But that’s the risk players take when choosing to play a slot like this.

If players manage to land 25 strawberry symbols on the reels at any time then they’ll win a massive 20,000x their initial stake which is not to be sniffed at whatsoever.

We really like Jammin’ Jars. First and foremost for how cheerful it is, it put a smile on our faces! Ultimately, it’s unique, easy to understand and offers players an exciting range of bonus features and mechanics that make it worth playing, even with its somewhat challenging high volatility.

We’ve seen plenty of people win big on this game thanks to the generous cluster pays mechanic! Combine that with the game’s progressive multipliers, free spins and the rainbow feature and you’ve got one very nifty little slot game.

Play Jammin' Jars now at the following verified online slot sites. These slot sites have been thoroughly audited and reviewed by us to ensure they offer an exceptional user experience, are trustworthy, safe, secure, and boast the best variation of online slots in their portfolio including Jammin' Jars:-

Enjoyed Jammin' Jars? Here's a handful of similar slots we think you'll like too. These online slots have been chosen based on features and themes similar to Jammin' Jars. You might also want to check out other Push Gaming slots.