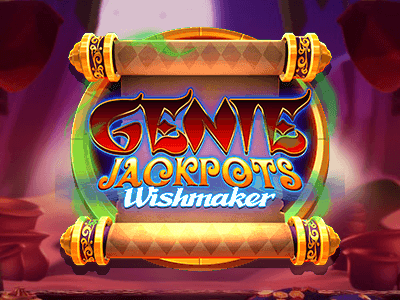 The Genie is back and he's ready for you to make the ultimate wish in Genie Jackpots Wishmaker. Playing on 5-reels with 20 paylines, this Arabian slot gives players the chance to win on Blueprint's Jackpot King.

It also contains the Genie's Wishmaker Bonus that can award 1 of 6 bonuses on the wheel. There are even 7 different modifiers on the Wishmaker Power Spin for players to activate. Say "open sesame" to Genie Jackpots Wishmaker!

“ The best of the Genie Jackpots series so far with 6 features and 7 modifiers! ”

Like in most Blueprint titles, Genie Jackpots Wishmaker has a variety of features to help you throughout your gameplay. It all begins with the Genie's Wishmaker Bonus which can be activated by landing 3 or more bonus symbols. Once this triggers, you will be taken to a wheel to spin and win 1 of 6 different bonuses. These include:

Aside from the bonus mode, you can add modifiers to your game at any point. The modifiers are randomly activated and there are 7 different ones to receive.

Of course, some versions of this slot will have Blueprint's Jackpot King. You spin the reels to collect crown symbols and then you get to pick from the King's treasure to increase your prize and enter the wheel king for a chance to win on the progressive jackpot.

Landing 3 or more bonus symbols awards the Genie Wishmaker Bonus and gives players the chance to spin on the reel. There are 1 of 6 different bonuses to be won including free spins, cash spins and other bonuses. You can even gamble all the way to win Big Money Bonus.

During any spin, the gold lamp could appear with the genie and you get to choose a lamp. It will contain 1 of 7 different modifiers to help out your gameplay. The genie can also turn a combination into a winning one at any random time.

Some versions of Genie Jackpot Wishmaker have the Jackpot King attached with 3 different networked progressive jackpots. The first two pots (Royal and Regal) have must-win conditions that must be met to win and the larger Jackpot King can be won on any spin.

Blueprint Gaming are back with a Genie Jackpots slot that is bigger than ever. Genie Jackpots Wishmaker brings back everyone's favourite Genie but with even more features and modifiers this time. This Arabian slot plays on 5-reels with 20 paylines and gives players the chance to win 3,125x their stake in the base slot. However, players can win life-changing amounts with the Jackpot King.

There are 6 different features to unlock through Genie's Wishmaker Bonus including free spins, cash spins and cash trails. Other than that, you can randomly win 1 of 7 multipliers to improve your gameplay even more! What more could you want?

As the slot opens up, you immediately notice the bright and vibrant colours in the background. There's a slight breeze in the background which is shown with the tent billowing in the wind. The reels are surrounded by items you'd expect such as a genie lamp and treasures.

All of the images on the reels are part of the Genie Jackpots universe with the Genie returning along with his monkey sidekick and the book of wishes. It doesn't look too different from the other slots within this franchise but that's not the end of the world.

Thankfully, the music is exciting and sounds exactly how you'd expect it to. There are Arabian inspired sounds such as percussions, flutes and stringed instruments playing to create something magical. During bonus modes, the music intensifies to build up the suspense even more.

Of course, ambient noises are heard through this slot as well - mainly the Genie. Once he comes out, he has his own personality and emotions which sounds and looks fantastic.

There's not much to say about the gameplay in Genie Jackpots Wishmaker as it's quite simple. It's frustrating that the payline doesn't explain the mechanics or features well - but there are straightforward once you hit them.

Bets begin at 0.10 and players can set up to 100 autospins. The spin button can be found on the reels' right and is highlighted by a huge green symbol.

The biggest base game win comes from the Genie's Wild Storm Free Spins which can award up to 3,125x your stake by locking in wilds with multipliers of up to 5x. However, you can win even more on the progressive jackpot through the Jackpot King!

Of course, with a jackpot - the RTP is lower than usual. It's at a decent 95.57% with a medium volatility level which is unexpected for the Genie Jackpots series as it's usually toward high volatility.

Genie Jackpots Wishmaker is fantastic in terms of features and modifiers. Each playthrough will be new and engaging with so many different avenues to explore depending on your playstyle. Of course, the visuals and design are impressive but nothing spectacular.

The win potential is decent enough with the Jackpot King and it'll definitely suit high rollers whilst the base game will appeal to more casual players. It has the best of both worlds and has a lot going for it - so it's a slot well worth playing. Make sure to give Genie Jackpots Wishmaker a spin!