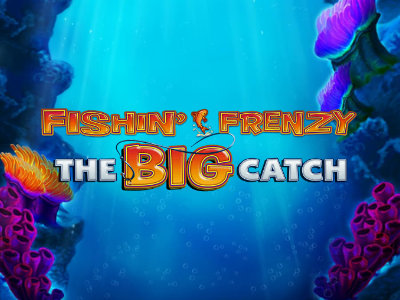 Fishin' Frenzy: The Big Catch is a 5-reel, 10 payline slot developed by Big Time Gaming that retains the classic Fishin' Frenzy aesthetic whilst bringing players some impressive winning potential (50,000x stake!) by way of a brand new feature that sees fish symbols level-up during the free spins bonus feature. If you're a fan of the original Fishin' Frenzy slot then this slot will most certainly do the job for you!

Jump straight into the action and play Fishin' Frenzy: The Big Catch now at the following fully licenced UK slot sites. These slot sites have been thoroughly audited and reviewed by the team here at Slot Gods to ensure they offer an exceptional user experience, are trustworthy, safe, secure, and boast the best selection of online slots in their portfolio including Fishin' Frenzy: The Big Catch...

Fishin' Frenzy The Big Catch isn't too dissimilar from the original Fishin' Frenzy slot, the free spin feature remains, however this time it's been boosted so that players can upgrade the value of the fish symbols during the bonus round!

If players manage to land 3 or more bonus symbols anywhere on the game reels then they'll automatically trigger the Fishin' Frenzy Free Spins bonus which gives players the following number of free spins:

During this bonus Fisherman symbols become active, any spin in which the Fisherman symbol land on the game reels will see cash prizes awarded for the combined value of each and every fish symbol that also lands in view on screen at the same time.

Landing 4 Fisherman symbols will upgrade the value of all the fish symbols in play for the remainder on the bonus, meaning that there are significantly more high-value wins. Landing 4 Fisherman will also award players with an additional 5 free spins. This bonus is tiered across multiple levels, so the more times you land 4 Fisherman, the bigger the wins.

Landing 3, 4 or 5 scatter symbols anywhere on the reels during base gameplay will see players win 10, 15 or 20 free spins respectively.

Fishin' Frenzy The Big Catch is the latest iteration of the classic Blueprint Gaming slot that can be found across the internet and on physical slot machines around the globe.

This 5-reel, 10 payline animal-themed slot is quite similar to the original game, Fishin' Frenzy, which will genuinely draw quite a few fans of classic slots in, however, this slot now features even bigger payouts thanks to a progressive level up feature that sees the value of the fish symbol get more and more lucrative every time players land 4 Fisherman symbols during the free spins.

We'll be completely honest Fishin' Frenzy Big Catch is almost a carbon copy of Fishin' Frenzy which is quite disappointing. Considering that the original slot was released way back in 2014, surely enough time has passed at this point that we might actually get something a little bit different?

The classic-style game reels are set deep under the ocean, exactly as they were in the original slot. In terms of symbols, it's also pretty much the same! Low paying symbols are your standard 10, J, Q, K and A. High paying symbols include a fishing tackle box, a rubber lifebuoy, a fishing rod reel and a seagull. The game's scatter symbol is a fishing boat, then there's the Fisherman symbol and the different sized fish symbols that each hold separate values (during the bonus).

This game is pretty straightforward, which is no surprise as Blueprint Gaming have tried to retain the classic aesthetic that so many fans love. During base gameplay the iconic blue fish symbols has a fixed value, but during the bonus feature these fish have varying multiplied values that can be incredibly lucrative.

Navigating the slot is another simple exercise, Fishin' Frenzy The Big Catch is laid out in the same manner that all Blueprint Gaming slots. The game menu, paytable and stake selection buttons can be found on the left-hand side of the game reels. The autoplay button (that allows players to set up to 100 automated spins) and the game's play button can be found to the right of the game reels.

This medium volatility slot has a slightly below-average RTP of 95.32% which isn't ideal, however, the maximum win potential for this nautical game is an impressive 50,000x the player's stake.