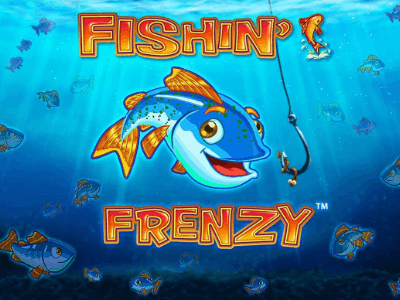 Fishin' Frenzy is a 5-reel, 10 payline slot developed by Blueprint Gaming that's slowly developed into a cult classic over the years. The fishing-themed title doesn't offer a lot in the way of bonus features and unique mechanics, but its simplicity is what's made it such a hit with casual players. Such is its popularity, you're quite likely to find this game on physical slot machines in casinos, pubs, bars and bookmakers. Fishin' Frenzy features a lucrative free spin round that boasts Extra Wins that can see players win up to 5,000x their initial stake.

“ No thrills fishing fun! This cult classic isn't amazing, but is still worth a spin ”

Fishin' Frenzy is a notoriously simple online slot to master, and it's for that reason why it translates so well onto physical machines where casual players can give it a spin. The game's only feature is a pretty generous free spins bonus, which comes bundled with a lucrative Extra Wins mechanic.

If players land 3, 4 or 5 fishing trawler scatter symbols anywhere on the reels then they'll win 10, 15 or 20 free spins respectively. During these free spins the Extra Wins mechanic comes into play.

During the free spins bonus feature all of the blue fish symbols have their own unique values these are 20, 50, 100, 150, 200, 250 and 500. If any of these fish land on the reels at the same time as a fisherman symbol then the value for all of the fish on screen are added together and paid out to the lucky player!

Players can receive either 10, 15 or 20 free spins upon landing 3, 4 or 5 fishing trawler scatter symbols. During this feature Extra Wins come into play.

Whenever a fisherman symbol lands on the reels alongside blue fish symbols, the values of the blue fish are added together and paid out to the player.

Fishin' Frenzy is a true classic in the world of slots, this popular 5-reel, 10 payline animal-themed slot developed by Blueprint Gaming has been around since 2014 and can be played at all your favourite slot sites as well as on physical slot machines in bookmakers, pubs, bars and casinos around the world, similar to the Rainbow Riches series of games. We'll be honest, Fishin' Frenzy certainly isn't the flashiest or most impressive slot game we've ever played, but it's memorable and has captured the imagination of thousands of players enough to have seen multiple iterations and sequels.

Fishin' Frenzy is a strange old game, it really does look quite simple and at first glance it's easy to feel a little bit underwhelmed by it, but on the other hand, this game is so recognisable it's unreal. Practically anyone who considers themselves a fan of slot games would be able to tell you what a Fishin' Frenzy game looks like. You have to say that Blueprint Gaming has been successful in terms of design, even if this slot didn't blow our minds.

The five rectangular game reels sit in front of a bright blue ocean scene that's surprisingly free of any sort of marine life, which we'll be honest, is a bit odd. Perhaps everything was fished up in a frenzy?

This slot plays just as you'd expect any standard Blueprint Gaming title to play. Players can access the game's paytable and change their stake on the left-hand side of the game reels, on the right-hand side of the reels players can set up to 100 automated spins and hit play.

This low/medium volatility slot is perfect for players that want slower-paced gameplay that will see them maintain their bankroll for a fair while. It has a pretty average RTP of 96.12% and a maximum win potential of 5,000x the player's stake, which is pretty average, however, at the original date of release, this was one of the better-paying slots.

Fishin' Frenzy is a cult classic, it isn't the best looking, feature-filled online slot out there, but we do have to give it the respect it deserves. If you're after an easy-to-understand online title that has a genuinely thrilling free spins bonus feature then you'll be more than happy with what Blueprint Gaming has to offer here.

Play Fishin' Frenzy now at the following verified online slot sites. These slot sites have been thoroughly audited and reviewed by us to ensure they offer an exceptional user experience, are trustworthy, safe, secure, and boast the best variation of online slots in their portfolio including Fishin' Frenzy:-

Enjoyed Fishin' Frenzy? Here's a handful of similar slots we think you'll like too. These online slots have been chosen based on features and themes similar to Fishin' Frenzy. You might also want to check out other Blueprint Gaming slots.