Choco Reels™ is a tasty Wazdan slot that's all about sweet treats! This cheerful 5-reel, up to 46,656 ways to win slot is FULL of bonus features and mechanics that had us grinning from ear to ear. After every winning spin two locked reel positions are unlocked, increasing the number of paylines. The Choco Spins bonus sees all reel positions unlocked for 6 free spins with an increasing win multiplier, whilst players can also trigger 10 free spins with an infinite multiplier! On top of all that players can choose their own volatility.

Jump straight into the action and play Choco Reels™ now at the following fully licenced UK slot sites. These slot sites have been thoroughly audited and reviewed by the team here at Slot Gods to ensure they offer an exceptional user experience, are trustworthy, safe, secure, and boast the best selection of online slots in their portfolio including Choco Reels™...

This incredibly cute, food-themed slot has plenty to offer in the way of bonus features and mechanics, it's genuinely what makes this particular game such a strong addition to any online casino lobby.

First and foremost we have the wild symbol, this substitutes for all symbols except the scatter symbol, which is completely understandable. Speaking of the scatter symbol, this is portrayed as a doughnut, land 3 or more of them on the reels and you'll receive a total of 10 free spins. Up to 3 additional spins can be earned each spin during this bonus and a multiplier increases after each win, there's no limit as to how high this can go.

By this point, you should have noticed there are a lot more paylines than your average slot. In total there are 46,656 ways to win that can be unlocked by means of consecutive wins, unlocking blocked out symbols, thanks to Choco Reels' cascading reels mechanic, all of the ways to win can be unlocked with just one successful spin of the reel, doing so will trigger the Choco Reels feature. This sees every single payline activate and an increasing multiplier kick in for a total of 6 spins.

If all of the above wasn't enough for you then you'll also be delighted to hear there's a gamble feature that allows players to have a go at doubling their winnings by playing a pick and click game that sees them pick between two ice cream cones. Pick the right one and you'll double your money, pick the wrong one and you'll leave with nothing at all. 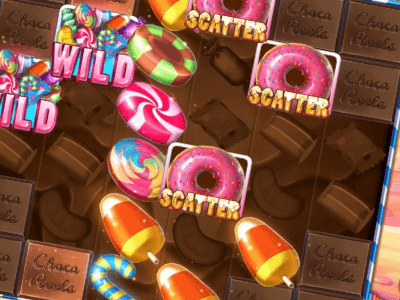 Landing 3, 4, 5 or 6 scatter symbols on the reels will activate a free spins bonus. During the free spins there are 46,656 ways to win and during each free spin an increasing multiplier is active. 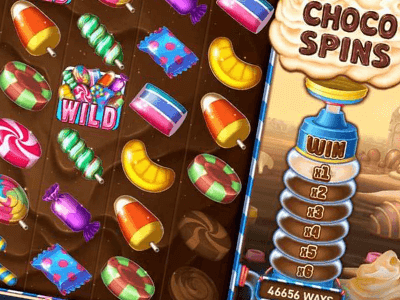 If players unlock all 12 blocked symbols on the reels then they'll trigger the Choco Spins Bonus. This bonus sees all 46,656 ways to win activate. Players receive 6 bonus spins with an increasing multiplier that climbs up by 1x each spin. 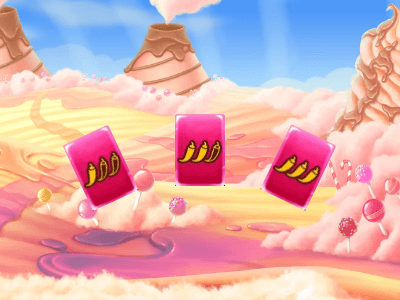 As is the case with all modern Wazdan slots, players can manually change the volatility of their game to suit their desired playstyle. There are three different volatility levels to choose from, low, standard and high. 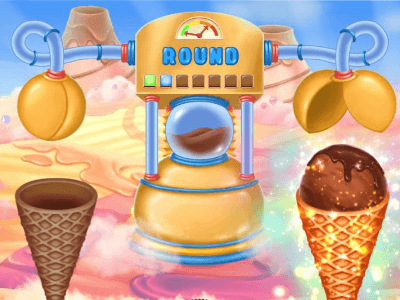 Players can choose to gamble their winnings (for double their money) by playing a pick and click game in which they must choose an ice cream cone. If ice cream fills the cone then players win. This game can be played multiple times.

Choco Reels™ is a truly sweet 6-reel slot with 2304-46656 ways to win. It's developed by Wazdan and has the ability to grow to an impressive 46,656 ways to win in the right circumstances.

This game is so sweet it'll give you a stomach ache. Everything is themed around cakes, chocolate and all things sugary! This vibrant game is beautifully designed, behind the reels sits mountains of candy floss, ice cream, candy canes and lollipops, whilst the reels themselves are adorned with smaller sweets.

In terms of sound, the music is the same quirky upbeat tune on repeat, it fits the theme perfectly, but it has the ability to get very very annoying if you're playing for a sustained period of time!

Choco Reels™ is played on reels that are set out in a 2-3-6-6-4-2 formation, however, with each consecutive winning spin a number of blocked out symbols are unlocked, allowing players to take the game from 2,304 ways to win to 46,656 ways to win.

In terms of navigating the game itself, it's a little bit intense than other games as there are a lot of buttons to keep track of at the bottom of the screen. On the left-hand side there's an info button, settings button, sound settings button and another help button that further explains game mechanic and rules. There's also a large feature buy button that can be utilised if players aren't in the United Kingdom.

In the middle of the action bar along the bottom are the different stake settings. These vary from casino to casino, but most sites will allow players the wage between 0.20 and 20.00 per spin. To the right of this is the volatility button that allows players to change the game's volatility, and by that is the spin, autospin and game speed buttons.

We've got no complaints about Choco Reels™ whatsoever. The volatility is adjustable and can see players win up to 9,500x their stake which isn't at all terrible, couple this with an agreeable RTP of 96.22% and you've got a fair and lucrative slot on your hands.

Choco Reels™ is a highly engaging online slot game that has plenty to offer in the way of bonus features and mechanics. There were genuinely no moments of boredom when spinning the reels of this Wazdan title, as there's always something going on, whether that be in the base game or one of the lucrative bonuses.

Play Choco Reels™ now at the following verified UK slots sites. These slot sites are fully licenced and have been thoroughly vetted and reviewed by us to ensure they offer a great user experience, are trustworthy, secure, and have a wide variety of the best online slots in their lobbies including Choco Reels™:-

Enjoyed Choco Reels™? Here's a handful of similar slots we think you'll like too. These online slots have been chosen based on features and themes similar to Choco Reels™. You might also want to check out other Wazdan slots.