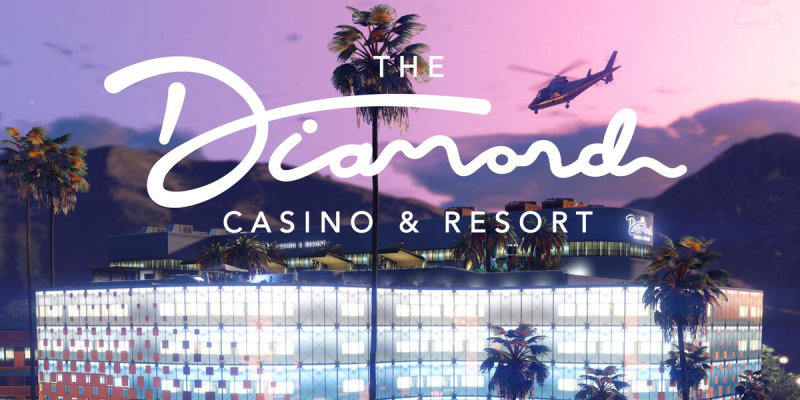 The story behind one of the world's most popular casinos that doesn't even exist in real life!

Believe it or not, there's actually a casino out there that doesn't see players win any real money whatsoever, yet it's visited by around 100,000 people a day, if that wasn't strange enough for you wait till you hear this... The casino is entirely virtual!

If you hadn't already worked it out, we're talking about the Diamond Casino & Resort, an incredibly popular casino that exists solely in the online version of the famous video game Grand Theft Auto 5. Why is it so popular we hear you ask? Well for one, players waited patiently for SIX years to gain access to the building.

When the game was first released back in 2013 players found the building tucked away on the corner of Vinewood Park Drive and Mirror Park Boulevard in Los Santos, with an 'Opening Soon' banner spread across the facade, which sent fans into an excited frenzy at the prospect of enjoying the lavish casino with friends.

Despite signs of opening in 2013, not long after the game's official launch, it wasn't actually until July 23rd, 2019 that the Diamond Casino opened its doors to players around the world. It was only 17 days earlier that the then-infamous 'Coming Soon' banner mysteriously disappeared, causing excited shockwaves throughout the diehard Grand Theft Auto Online community.

For years leading up to the grand opening, players had worked together to discover details about the much-anticipated casino, with a small band of tech-savvy enthusiasts data-mining the game's code in an attempt to find tenuous links to the future of the casino.

Also as a result of the deep dive, clues began to emerge that something big was coming, audio from Lester Crest, a character that sets up teams of real players to participate in big-money virtual heists was found in which he says "So listen, I just heard a casino opened up in town".

It turned out that there were in fact plans to release the casino as part of a future single-player expansion, however, such was the incredible popularity of the online version of Grand Theft Auto, developers scrapped this and opted to open it online instead.

On July 18th 2019 the Rockstar website unexpectedly posted the following announcement on their homepage 'Experience Excellence. The Diamond Casino & Resort opens for your enjoyment in the heart of Los Santos this Tuesday, July 23rd', the rest is history.

What can players do at Grand Theft Auto's Diamond Casino? 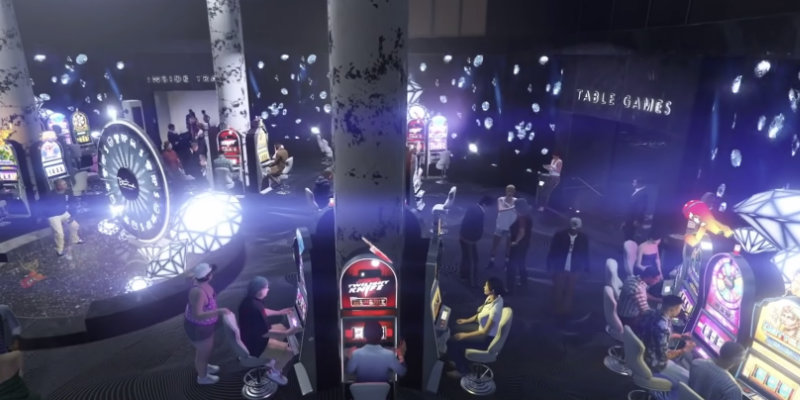 Amazingly, there are a lot of things players can do at Grand Theft Auto's Diamond Casino, arguably more than you might actually find at most real reputable online casinos.

Players can actually play a wide range of casino games including a variety of different slot games, blackjack, roulette, three card poker, horse racing and a lucky wheel. There's even a dedicated high roller section of the Diamond Casino that select VIP players can use.

If gambling isn't something you want to engage in whilst visiting the casino & resort, players can instead socialise with others in VIP lounges and on a rooftop terrace pool and bar, purchase and decorate their very own penthouse above the casino floor, or access their cars via the resort's parking garage.

Those that own one of the luxurious penthouse apartments here can even gain access to a personal limousine service that can see them receive free lifts across the game map, a service that can genuinely prove incredibly handy considering the game covers 49 square miles.

It goes without saying that the most popular aspect of the Diamond Casino is the lucky wheel. This wheel-of-fortune can be spun by casino members once every 24 hours and can award them with a multitude of prizes, including experience points, in-game cash, clothing and high-end cars.

How do players pay at Grand Theft Auto's Diamond Casino?

Players pay to play casino games at Diamond Casino using the virtual money they've earned in-game by taking part in missions, heists and mini-games with other players (or on their own), essentially players will never be required to spend their own money in-game.

That being said, there is a way for players to exchange real-life money for in-game money by way of purchasing Shark Cards. These cards are essentially gift cards pre-loaded with a set amount of virtual money, these range from £1.99 for $100,000 in-game cash to £64.99 for $8,000,000 in-game cash, with a number of different purchase options in between.

As it stands there are no high-profile documented cases of players buying Shark Cards to spend solely on casino chips at the Diamond Casino, however, many players will have ended up spending some of their leftover dollars on the roulette table after buying a fancy new supercar or penthouse.

Over the last few years there have been many people that have raised great concern over the fact that youngsters playing Grand Theft Auto Online have the ability to gamble, and learn how to play popular casino games (despite the fact that the game is age-restricted), however many gambling regulatory bodies countries, including the UK Gambling Commission (UKGC) have publically stated that there's nothing they can or will do about it, and that's essentially not their problem.

In a meeting with MPs about gambling in video games, the UKGC said they do not, and can not oversee the purchase of in-game content - like video game loot boxes - because there is no official way to monetise the winnings. This is the case for Grand Theft Auto Online, as all items and in-game cash won in the casino is strictly tied to an individuals account, and can not be traded.

Interestingly, over 50 countries have banned online players from accessing the casino games within Diamond Casino, as you'd expect, many of these are strict religious countries, however there some surprises here including the Czech Republic, Greece, Iceland, Poland, Portugal, South Korea and even Malta, the online gambling capital of the world. Despite not being able to gamble, most players from these countries are still able to walk around the casino floor and watch others playing the games.