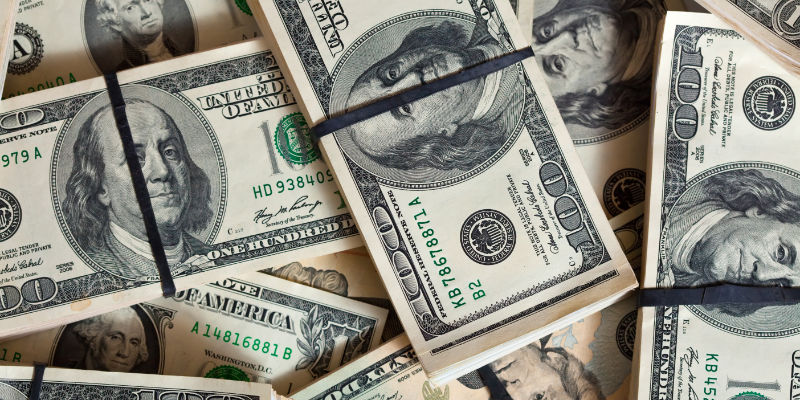 Let's be honest, there aren't too many gamblers out there that can say they've made an entire living from betting on their favourite games and sports in casinos, bookies and racetracks around the world, in fact, the list is so small that it beggars belief that these guys actually managed to earn enough to live comfortably doing what they loved.

Many of us try and beat the odds every single day, whether that be playing the very best online slots in the hope of finding that lucky game, a good progressive jackpot slot that could pay out tens of millions or a classic table game such as blackjack or poker, where some really big money can be won with a bit of know-how... But realistically we'll never get close to the success these guys have enjoyed.

Of course, there's been plenty of losses along the way for all of the below players, but ultimately they've been able to carve out a career for themselves thanks to mastering the art of gambling.... Or maybe they're just getting really lucky! Here's our list of the 7 most successful gamblers of all time.

Edward Thorp is considered to be the innovator of card counting, the American mathematics professor quite literally wrote the book on it, introducing millions of people around the world to the now frowned-upon practice.

Thorp developed his blackjack game theory in the late 1950s, which saw him program equations to calculate the mathematical probabilities of winning blackjack using an IBM 704, one of the only computers that could handle complex math.

Using his newfound theory Thorp travelled to casinos in Reno and Las Vegas (often in disguises such as a false beard as not to get recognised by casinos that had banned him), his very first trip saw him win $11,000 in a single weekend.

News of his escapades in casinos across the States spread like wildfire and he quickly became a celebrity figure within the blackjack community. In 1966 he released New York Times bestseller Beat the Dealer, Thorp also created the first-ever wearable computer that allowed gave players an advantage when playing casino games, however, this was quickly banned.

Thorp, a member of the blackjack hall of fame, has a net worth of over $800 million from using advanced statistical analysis to predict the outcome when playing blackjack, baccarat, backgammon and the stock markets.

American billionaire William Benter (more commonly known as Bill) realised at a young age that he had a good mind for mathematics and statistics, wanting to use this to his benefit he made his way to Las Vegas, where he quickly made a small fortune counting cards at blackjack tables throughout the strip. He did this using tips found in Edward Thorp's book, Beat the Dealer. After seven years he was banned from every single casino in Las Vegas.

In 1984 Benter met Alan Woods, who specialised in horse racing, together they pooled together $150,000 and used their collective mathematical and statistical knowledge to choose race winners at the Hong Kong Jockey Club and other tracks. Using in-depth statistical models he has made hundreds of millions from races over the years and has a net worth of over $1 billion.

Today, Benter is known for being a prominent philanthropist, having donated $1,000,000 to his hometown University, the University of Pittsburgh, helping finance Barack Obama's 2008 Presidential campaign and paying towards ad campaigns for a number of other Democratic politicians across the United States over the last two decades.

Australian Alan Woods was famous for not only being an incredibly talented mathematician but for being well-versed in horse racing and betting, having picked up a gambling habit at the University of New England. However, in his early days luck was clearly not on his side, as he dropped out of university before graduating and most of his bets proved to be unsuccessful.

It wasn't until 1979 that Woods began to take gambling seriously (after the breakdown of his marriage), he began playing blackjack, winning $16,000 in just a few months, on the back of his success he moved to Las Vegas where he won an additional $100,000.

He made the decision to retire from professional black in 1982 upon meeting Bill Benter, together they worked to create a computer model based on mathematics that allowed them to choose race winners. Later in life he moved to Manilla where he worked with his self-described 'rival' Zeljko Ranogajec where he made even more money from horse racing.

Sadly, Woods who was considered the 'Master of Quantitative Betting' passed away in 2008 shortly after being diagnosed with appendiceal cancer, at the time of his death his net worth was estimated to be around AU$670 million.

Zeljko Ranogajec is an Australian born to a family of Croatian immigrants in 1961 that made his fortune in blackjack, keno and horse racing over the years.

Upon dropping out of the University of Tasmania to become a full-time professional gambler, Ranogajec alleges to have started out with a bankroll of just a few hundred dollars, which he turned into millions in a very small amount of time. Such was his success (which he attributes to a photographic memory) he was banned from almost every casino in Australia.

Over the years, as his reputation became more prominent, he opted to move into sports betting, starting a joint venture with fellow Aussie and blackjack pro (and once rival) Alan Woods, betting on the outcome of horse races in Manilla.

Considered one of the most prolific and innovative advantage players of all time, Ranogajec is a notoriously private man who rarely speaks publicly, despite providing employment to hundreds of people in Australia, and being named 'the world's biggest punter' (with a net worth of AU$600 million) by numerous media outlets.

Doyle "Texas Dolly" Brunson is considered the most legendary poker players of all time, earning himself the nickname "The Godfather of Poker" after becoming the very first player in the world to win $1 million from poker tournaments alone. In addition to this impressive feat, he's also one of only four players to have won the Main Event at the World Series of Poker multiple times (with an impressive ten championship wins in total), winning back-to-back series' in 1976 and 1977.

Brunson started out gambling in illegal games in Fort Worth, Texas ran by members of organised crime in the early fifties, he then moved onto bet on poker, golf and "just about everything" as part of a syndicate with his friends, before he decided to move to Las Vegas and go it alone, entering the very first World Series of Poker in 1970.

Brunson is the author of one of the most popular poker guides of all time, Super/System (and later Super/System 2), often referred to as the poker bible, in addition to this there's a well-known poker hand named after him, the “Doyle Brunson hand”, which is when players have 10-2.

Amazingly, in 2005 and 2007 Brunson came up against both his son (Todd Brunson) and daughter (Pamela Brunson) respectively in two separate World Series of Poker tournaments.

Not only is California-born poker player Phil Ivey a ten-time winner of the World Series of Poker, but the youngest person to ever achieve this incredibly impressive feat. Widely considered the "Tiger Woods of poker" he was one of the best players in history, having made in excess of over $100 million from poker at cash tournaments and online over the years.

Whilst he's revered for winning hundreds, if not thousands of high-stakes poker tournaments over the years, he's also made headlines for the wrong reasons, in 2012 Ivey was involved in a high-profile edge-sorting scheme, which is a technique used in advantage gambling where a player determines whether a face-down playing card is likely to be high or low.

Ivey and his betting partner were caught utilising this technique after winning $11 million playing Punto Banco (a version of baccarat) at the Crockfords Casino in London. Ivey argued he was making intelligent use of an imperfection in the playing cards in use, the casino (and the UK Supreme Court) said otherwise, and the pair were refused their winnings.

There's winning streaks, and there's winning streaks that last for 30 years, Billy Walters is the proud owner of this incredible record. Born in Munfordville, Kentucky, Walters did not have the best of upbringings, at only 18 months old his father passed away and his alcoholic mother abandoned him to live with his Grandmother, he grew up in a home with no indoor plumbing or running water.

Walters placed his first bet aged 9, putting his paper-round money towards a bet on the 1955 baseball World Series, by the age of 22 he had managed to lose $55,000 and a house as a result of gambling.

Despite multiple setbacks, Walters proved to have an incredibly strong work ethic, working multiple jobs in order to get ahead in life, as a car salesman he worked 80-hour weeks and managed to sell enough cars to make $56,000 in 1966, which is the equivalent of $400,000 today.

In 1981 he made the decision to leave sales and become a full-time sports bettor (despite his previous form), over the course of 39 years it was found that Walters only had one year in which he made an overall loss, and went 30-year winning streak, which is unheard of.

Such was his success he would have to employ others to place bets for him, as bookmakers would refuse him due to his winning streak. Most of Walters winning bets came from basketball, NFL and college football.

Billy Walters luck came to an end in 2017 when he was found guilty of insider trading and was sentenced to 5 years in prison and fined $10 million. His sentence was commuted in 2020 by former President Donald Trump after receiving the support of famous golfer Phil Mickelson, who allegedly received stock tips from Walters over the years.

Of course, there are others that were well deserving of a spot on this list, but for one reason or another didn't make the cut. There's the MIT (Massachusetts Institute of Technology) Blackjack Team, who were a professionally vetted team of players that visited casinos since the 1970s, working together to beat dealers with an estimated edge of 2-4%, a Hollywood movie called 21 based on their exploits was released in 2008 featuring Kevin Spacey.

Popular Instagram personality Dan Bilzerian is another that almost made the list. The millionaire, who inherited millions in his 30s, first hit the headlines in 2007 when he entered a casino in Lake Tahoe with a suitcase stuffed with cash looking for an ultra high-stakes private poker game. Bilzerian claims that he has won $10.8 million in a single night and over $50 million in his entire poker career.

With only one appearance in the World Series of Poker Main Event, that saw him finish in 180th place, we're unsure if the man with the very public playboy lifestyle is telling the complete truth.

Finally, we have disgraced former United States President Richard Nixon. During World War II Nixon was a U.S. Navy Lieutenant that oversaw the logistical movement of arms around Guadalcanal Air Base in the Soloman Islands, however, he was later transferred to Green Island, just off the coast of Queensland, Australia. It was here where he found the time to take up poker.

During his time stationed on Green Island, Nixon learned to play the game from scratch, eventually earning himself a reputation for being a card shark, making thousands of dollars in winnings, which back in the 1940s was more than enough to help fund his first run for political office, his time as a congressman eventually saw him make his way to the biggest job in world politics.