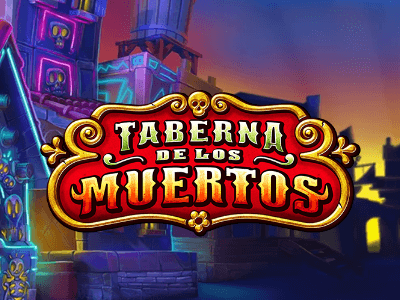 “ This charming Mexican slot will definitely keep you on your toes ”

Jump straight into the action and play Taberna De Los Muertos now at the following fully licenced UK slot sites. These slot sites have been thoroughly audited and reviewed by the team here at Slot Gods to ensure they offer an exceptional user experience, are trustworthy, safe, secure, and boast the best selection of online slots in their portfolio including Taberna De Los Muertos...

Taberna De Los Muertos is a bit of an odd game, players start out with just 25 paylines, however, the number of paylines is boosted each and every time players win on a certain set of paylines! This is part of Habanero's new "Line Boost" feature.

Ideally, players want to pick up wins on the higher-end of the scale in order to take home bigger wins thanks to more active paylines.

If a wild symbol and a scatter symbol appear directly adjacent to eachother on the reels then the 'Wild Feature' will be triggered. For each trigger combination, 2 wild symbols will randomly overlay on positions on the reels, this includes scatters but excludes wilds.

The wild symbols that overlay scatters will pay and act as scatters, potentially triggering free spins.

10 additional free spins are awarded when players land another 3 scatter symbols anywhere on the reels during the bonus round itself. If all of that wasn't quite enough, at the conclusion of the free spins, the win amount can be doubled multiple times at random!

If a wild symbol and a scatter symbol appear adjacent to eachother on the reels then the 'Wild Feature' will be triggered. For each trigger combination, 2 wild symbols will randomly overlay on positions on the reels, this includes scatters.

Players can trigger up to 40 free spins when between 3 and 5 scatter symbols land anywhere on the reels. In addition to this another 10 free spins can be triggered by landing 3 more scatters during the free spin round itself.

Taberna De Los Muertos (translated to Tavern of the Dead in English), is a bright, vibrant, gorgeously designed 5-reel, 101 payline Mexican-themed slot developed by the talented team at Habanero! Players celebrate the Day of the Dead in this game with an innovative line boost feature, an insane amount of free spins and a generous wild feature that can see the number wins rack up pretty quickly!

Low paying symbols are your standard royals (designed with a Latin twist). These are spades, clubs, diamonds and hearts. High paying symbols are a pair of dice, a fully loaded taco, a bottle of tequila and a gun! The more lucrative symbols float invitingly atop a colourful gold-trimmed circular plate.

When the game's 'Wild Feature' is triggered a burning heart appears on the game reels featuring the game's two protagonists who feature on the wild and scatter symbols. When the game's free spin feature is triggered a skeletal barman comes out of the Taberna and pours two drinks, signalling the start of the bonus feature! Finally, if players record a big win three Skeleton Mariachi band members pop up playing El Jarabe Tapatio (also known as the Mexican Hat Dance) as coins float down from the top of the screen.

First and foremost, players should understand that this slot has Line Boost active, this means that all gameplay begins with just 25 paylines, however, the number of paylines is boosted every time players register a win on a certain set of paylines (up to a maximum of 101).

In terms of navigating the slot, Taberna De Los Muertos utilises an action bar along the bottom of the game reels with an adjustable bet level and coin value, meaning that players have a bit more freedom when it comes to their stake. Players access an information bar on the left-hand side of the screen and can set up to 500 automated spins on the right-hand side.

There's quite a lot going on Taberna De Los Muertos, the Line boost feature can be somewhat confusing at first, but once you get your head around it then this charming Mexican slot will really keep you on your toes! The opportunity to unlock up to 101 paylines and trigger 40 free spins is pretty damn attractive!

Play Taberna De Los Muertos now at the following verified UK slots sites. These slot sites are fully licenced and have been thoroughly vetted and reviewed by us to ensure they offer a great user experience, are trustworthy, secure, and have a wide variety of the best online slots in their lobbies including Taberna De Los Muertos:-