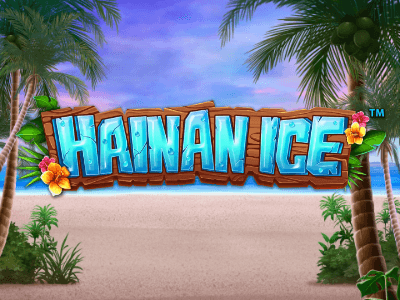 There's no doubt in our minds that you'll want to jump on a plane and fly to this wonderous island full of tasty drinks and wins. Developed by Rare Stone, Hainan Ice plays on 5-reels with 25 paylines but players have the potential to unlock 243 ways to win.

Players can even win up to 2,000x their stake with the different wild features and the multipliers of up to x10! Just make sure that you have your suncream ready for the hot wins.

“ Perfect for newcomers who want low but frequent wins ”

Jump straight into the action and play Hainan Ice now at the following fully licenced UK slot sites. These slot sites have been thoroughly audited and reviewed by the team here at Slot Gods to ensure they offer an exceptional user experience, are trustworthy, safe, secure, and boast the best selection of online slots in their portfolio including Hainan Ice...

Hainan Ice is a slot with cascading reels which means that the reels don't necessarily spin - but fall onto the reels.

As soon as you land and collect 3 wild fruits, the Peach Wild feature will be triggered. During each spin, a roaming reel with wild symbols will land randomly to cover one of the 5 reels. Every spin will consume 1 collected wild fruit.

Just like the previous feature, the Orange feature is triggered by collecting 3 orange fruits. During this feature, the multipliers for the winning cascades will be doubled.

When you manage to collect at least 3 starfruit symbols, this feature will be triggered. As soon as this feature is activated, symbols will be evaluated as Way pays rather than just line pays meaning there are more ways to win.

When you manage to collect 3 lychee fruits, then all Lychee symbols on the reels will be replaced with wild symbols instead. 5 lychee wilds can pay 200x your stake!

Developed by Rare Stone, Hainan Ice is a tiki-themed slot that plays on 5-reels with 25 paylines. Of course, you can expand these paylines to 243 ways to win with the Starfruit feature. Ultimately, this slot focuses on collecting different fruits and gaining the bonuses attached to it. Players can win up to 2,000x their stake provided that they land lucky. So grab your drink and relax by the beach in Hainan Ice.

Sadly, there's not a lot to the background of this slot as it's quite generic and looks a little outdated. There is of course the ocean in the background with palm trees and sand nearby, but that's about it. It's nothing spectacular and doesn't even animate - which makes it feel quite lifeless.

The symbols themself look decent enough on the reels and the addition of ice surrounding them adds to the holiday aesthetic it's trying to put forward.

Unfortunately, there is no music and just ambient sounds. You can hear seagulls and ice falling but that's about it. It could've done with some tropical music or something to get you pumped for a holiday - no one is going to want to go to a resort with no character or excitement.

It should be noted that this slot doesn't use the traditional reels and instead uses cascading reels. Ultimately, this means that the reels fall onto the reels rather than spin and similarly, they fall off too. Anything else you could need is at the bottom with the payline details to the far left and the spin button in the middle.

Whilst Hainan Ice won't blow anyone away with its creativity, the slot itself is fun enough to play. It's simple enough that newcomers can pick up and play, whilst having decent enough features for seasoned players to enjoy.

If you like tiki slots with a luxurious edge, then Hainain Ice is for you. However, if you are looking for a bigger payout, we suggest trying Drinks on the Beach.

Play Hainan Ice now at the following verified UK slots sites. These slot sites are fully licenced and have been thoroughly vetted and reviewed by us to ensure they offer a great user experience, are trustworthy, secure, and have a wide variety of the best online slots in their lobbies including Hainan Ice:-

Enjoyed Hainan Ice? Here's a handful of similar slots we think you'll like too. These online slots have been chosen based on features and themes similar to Hainan Ice. You might also want to check out other Rare Stone slots.