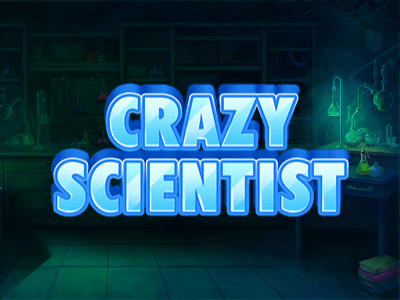 Grab your best lab coat and join Crazy Scientist in the lab. Let’s hope that you manage to discover the 8x multiplier to some explosive wins.

Playing on 5-reels with 20 paylines, Crazy Scientist is all about free spins and multipliers. If the experiment goes well, you could win up to 1918.50x your stake!

“ Perfect for players who love free spins and nothing else! ”

Whilst there may not be a lot to Crazy Scientist, the focus is primarily on the free spins feature. Once free spins has been activated, you get the choice to pick 1 of 6 robots to determine your prize.

Any wild substituting on a payline will automatically multiply the win by 2x. It can substitute any symbol apart from the robot bonus symbol and the magnet scatter.

The robot bonus symbol can award free spins if you manage to roll 3 or more on the reels. You’ll get the chance to pick 1 of 6 robots to determine which free spins round you get. They can retrigger and could potentially be endless!

The robot bonus symbol can award free spins if you manage to roll 3 or more on the reels. You’ll get the chance to pick 1 of 6 robots to determine which free spins round you get.

It’s not everyday that you get to see a Crazy Scientist’s laboratory everyday, but you finally can with this slot. Witness the madness and win up to 1918.50x provided that you follow the scientist’s instructions.

Developed by NetGame, this slot plays on 5-reels with 20 paylines. The focus of this slot is free spins and getting multipliers to improve your payout. So put on your protective glasses and meet the Crazy Scientist.

You’ll feel like you’ve been transported to a mad scientist’s lab as the background of the slot is the Crazy Scientist’s laboratory. With beakers and the scientist himself, you get the full atmosphere of the environment. Occasionally, the scientist will make random noises or remarks highlighting just how bonkers he is. Symbols and other icons such as robots and microscopes just reinforce the genre.

The music is upbeat and mixed in with ambient boiling noises. It is exactly what you’d expect from a slot like this. The upbeat music sounds friendly and familiar. Funnily enough, the music during the bonus round sounds more like victory music from Super Mario. It feels out of place but completely bonkers (so maybe it fits perfectly).

They often say that geniuses are mad, and that’s  definitely not the case with Crazy Scientist. The gameplay is quite simple with only free spins, multipliers and wilds to spice up the slot. With the 5-reels and 20 paylines, it’s easy to focus on your slot and ideal for traditional slot players.

If you’ve played a NetGame before, you’ll realise that they always put the settings and gameplay information at the bottom left with the spin button in the middle. You’ll find the autospin next to it and it goes up to 1,000 autospins.

With low volatility and an RTP at 96.49%, Crazy Scientist is perfect for slot players who prefer frequent but smaller payouts. The maximum payout according to the developers is 1918.50x your stake so don’t expect huge returns. You can expect the maximum payout by winning during free spins and the 8x multiplier.

Like most NetGame slot, you’ll find the 4-tiered progressive jackpot. You have to work your way up from red and silver to gold and diamond. It can be activated by simply continuing to spin. There’s a timer until it drops, so make sure to keep spinning if you want to win. Be aware that this feature may not be available at every casino.

Let’s just say that we aren’t mad about this slot but in the worst kind of way. The gameplay mechanics aren’t anything special and don’t add anything original. It’s disappointing that there are only free spins and multipliers with nothing else.

Whilst the free spins are rewarding and frequent, you don’t gain anything spectacular. They have no limit so could constantly retrigger but with the low payout, it feels a little empty. It feels like this slot could’ve pushed further to become a classic, but it ultimately just let us down. As long as you go in expecting frequent but low returns and traditional gameplay, then you should have a decent time with Crazy Scientist. For a NetGame with more features and better prizes, try out Hit in Vegas.

Enjoyed Crazy Scientist? Here's a handful of similar slots we think you'll like too. These online slots have been chosen based on features and themes similar to Crazy Scientist. You might also want to check out other Netgame slots.