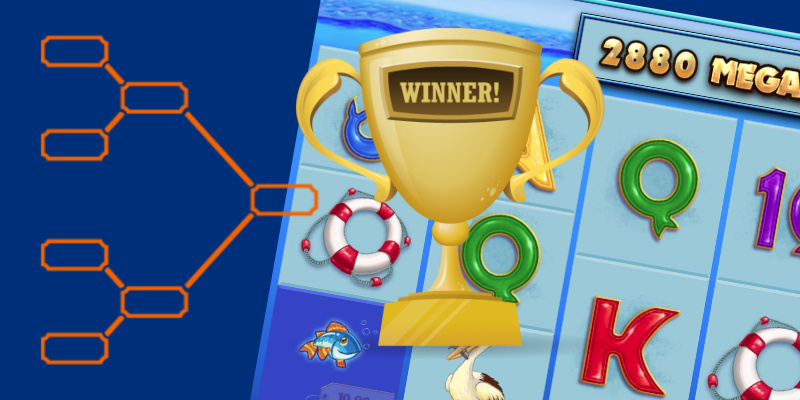 Everything you ever needed to know about online slot tournaments explained!

Don't worry if you don't, because we here at Slot Gods have got you covered with our comprehensive guide to online slot tournaments that should answer any questions you may have!

What are online slot tournaments?

To put it simply, slot tournaments are head to head challenges that see multiple players tasked with recording the highest score possible across a set number of spins on a specific online slot game.

The player that finishes with the highest score at the end of a certain amount of time will win the tournament and will usually receive a cash prize or free spins to play on an online slot game.

Many online slots require players to pay a small fee to enter the tournament whilst others are free, however, once gameplay begins spins will cost players absolutely nothing! Usually, online slot tournaments with buy-ins tend to have bigger prize pools.

Rather than pay for as many spins as they'd like, players are instead given a set number of spins (such as 20, 50 or 100)... Some online slot tournaments will allow players to spend additional money to buy back into a tournament if they feel that they've not registered a high enough score at the conclusion of their spins.

How do you win money playing online slot tournaments?

Winning money playing online slot tournaments actually couldn't be simpler! All you need to do is opt into the tournament of your choice and spin the reels, rather than winning cash on each successful spin you'll instead win points. The more points you win the higher up the overall leaderboard you'll climb, beware though... Other tournament entrants can overtake you at any given moment, it's a dog eat dog competition.

Some online slot tournaments will award players with points whenever they record a winning spin, other tournaments will award players with points based on certain actions... For example, they might receive points for several consecutive winning spins (or losses), landing 5 of the highest-paying symbols, or triggering a bonus feature.

In order to actually win a prize in a slot tournament, you'll need to finish in one of the top three or five positions. Naturally, the higher up the leaderboard you finish the more valuable the prize.

As mentioned earlier in this guide, prizes can vary... Players will most commonly receive cash prizes or free spins, however, it's not unheard of to see players receive luxury holidays, electronics and cars!

What are the different types of online slot tournaments?

There are many different types of online slot tournaments that players can enjoy, some are very simple and straightforward, others offer a little bit more in the way of complexity, one thing they all share in common is the fact that they're incredibly fun to play! Here's our rundown of each different type of online slot tournament and how they work.

A scheduled slot tournament is exactly what it sounds like, these are tournaments that have a designated start and end time. Tournament lengths can vary from a quick 5-minute game to one that takes days, weeks or even months to finish. The longer the tournament the bigger the prize.

Sit and Go tournaments are the same as Sit and Go tournaments you'd find when playing online poker. These are games that do not have a designated start time, but begin once enough players have registered to compete in the tournament. A tournament will only last a short while and the prizes are usually quite modest in comparison to larger scheduled ones... Many players opt to play these are they can be over quickly and give slot enthusiasts the best opportunity to win a prize.

Reloader tournaments are online slot tournaments that see players pay an entry fee to take part... The player can spin the reels for a certain amount of time, however rather than register a final score at the end of their playtime, they can opt to spend more money to rebuy and continue playing, racking up their score... The rebuy is also referred to as 'reloading', hence the name reloader tournaments. You might have also seen this referred to as an 'Extender tournament'.

Survivor tournaments are fast-paced tournaments that see players go head-to-head across a handful of rounds (usually 3), a number of players with the lowest scores are knocked out each time a round ends.

Similar to Survivor tournaments, a One-Shot tournament is a high-pressure competition that sees players receive a very limited number of spins, during these spins they have one shot at recording the highest possible score. At the end of a round, those at the top of the leaderboard progress to the next round whilst those towards the bottom are knocked out.

VIP players (players that have been identified by the casino as high-rollers or consistent players) will often be invited to special 'VIP' or 'Comped' online slot tournaments. These are exclusive tournaments that are put on for them exclusively, the prizes are often higher and there's less competition to win, as only a handful of special players are invited to play.

What are freeroll slot tournaments?

These tournaments can offer players huge life-changing sums of money, or a huge number of free spins that players can use on the best games such as Dead or Alive 2, Gonzo's Quest Megaways and Money Train 2 just to name a few.

Many popular slot sites offer Freeroll tournaments as they entice new players to sign up, and many operators know that once the player has finished playing the tournament they'll take a look around the site and get stuck into other games after getting a little taste for what they have to offer.

If you want to be in with the best chance of winning an online slot tournament it's recommended that you begin the tournament betting high, this is for two important reasons.

Firstly, because any balance that hasn't been used by the end of the slot tournament is gone forever, there's absolutely no reason not to utilise every last penny. Secondly, the bigger the stake you play with, you'll receive much bigger returns following a winning spin, which is always the case when playing any online slot game.

Finally, the last thing to remember when playing in online slot tournaments is to not stop spinning if you're playing on a strict time limit. If you don't use up all of your allotted spins/bankroll in the time afforded to you then you've potentially thrown away the entire tournament as someone could end up hitting a winning spin that takes them ahead of you on the leaderboard on their very last spin.

If you're comfortable with the stake you've set yourself for the tournament then we'd recommend using the autoplay button (if it's allowed during gameplay), this way you can ensure you can play through your entire bankroll in the allotted time.