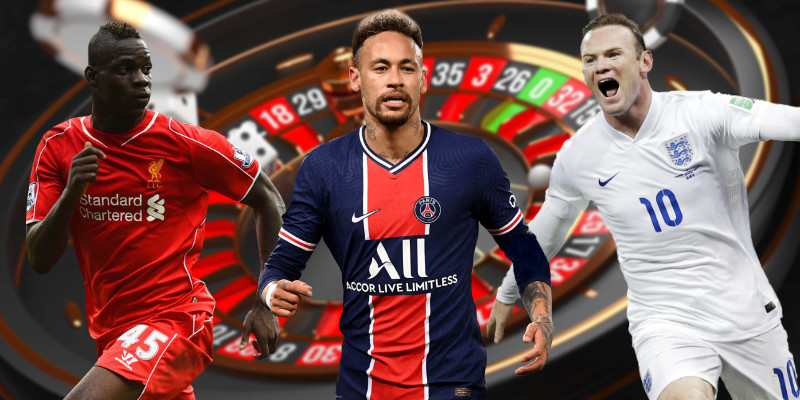 Footballers are paid mega-bucks to play football and entertain supporters around the world, with so much money to burn through it's inevitable that a handful of these players will look for exciting ways to spend it, and gambling is one of them.

There are not many pastimes that can create the same level of anticipation and deliver an adrenaline rush quite like playing top-level football in front of a packed-out stadium... But online slots, blackjack, roulette, poker and sports betting offer just that.

We've seen many articles out there about footballers that love gambling that really just list players who have endorsed slot sites and poker sites, but this list is about those who genuinely loved to gamble at some point during their career.

Wherever quirky Italian Mario Balotelli goes, chaos and controversy usually follows. Over the years Super Mario has gained a reputation for acting outlandishly.

Some of Balotelli's stunts include driving into a women's prison in Italy "for a look around", being sent shopping by his mother to buy essential items for his new home, only to return with a trampoline and a Vespa, setting said home on fire having set off fireworks in his bathroom and becoming the face of a firework safety campaign a week later.

However, the Balotelli moment we'd like to highlight happened In 2011, the then Manchester City star famously hit the headlines after he won an impressive £25,000 playing in Manchester235 Casino.

The story goes that immediately upon leaving the well-known casino he decided to gift the first homeless person he came upon £1,000, effectively altering the course of their life. The story made national and international news and is now part of that storied Mario Balotelli folklore.

England's greatest-ever goalscorer needs no introduction, Manchester United legend Wayne Rooney has hit the tabloid headlines for all the wrong reasons many times over the years, mostly for his antics after having a drink or two.

There are quite a few stories out there about the now Derby County manager's reckless gambling habits. A regular visitor to Manchester235 (just like his once city-wide rival Balotelli), Rooney has allegedly lost in excess of £500,000 in just a couple of hours, chasing losses on his favourite casino games, roulette and blackjack.

In addition to this, Rooney reportedly faced an FA investigation in 2006 that looked into accusations that he had lost £700,000 in a secret gambling ring comprised of England players.

In more recent times Rooney has opened up about his gambling problems and has advocated for safer and responsible gambling alongside Derby County partners 32Red.

Brazilian superstar Neymar has already enjoyed a trophy-ladened career having made appearances for Santos, Barcelona, Paris St Germain and the Brazilian national team. Despite having a fair few years left in the tank as a professional, the striker has already announced his plans for retirement, as he wants to become a professional poker player.

So strong is his love for the popular casino game, that he named his dog Poker! Talking about the future career move, Neymar said: "It's true I plan to turn pro. I feel very comfortable playing poker, and think I can play in major tournaments after my football career is over.

"I began playing during the 2014 World Cup, and I have fallen in love with the game. I play poker in an aggressive fashion. My favourite hands are a pair of tens - after my shirt number - and Jack-Five.

"There are similarities between football and poker, in the ways how you read your game and your opponent, and choose when to attack. I used to play it a lot while with Barcelona, and we play often at PSG."

Veteran Burnley and Scotland right back Phil Bardsley is a main-stay in the Premier League, having played for Manchester United, Aston Villa, Sunderland, Stoke City and Burnley in his 18-year career... But it's at Sunderland where he caused quite a stir as a result of his gambling habits.

Bardsley was photographed by his team-mate Matthew Kilgallon lying on the floor of their local casino covered in £50 notes ahead of Sunderland's final game of the 2012/13 Premier League season. As a result his manager, hot-headed Italian Paolo Di Canio suspended him for their final game of the season against Tottenham Hotspur at White Hart Lane.

His run of poor luck at Sunderland continued into the following season where he broke his foot playing in Sunderland's under-21s side, a week later he was suspended by the club for mocking the club's opening day defeat to Fulham. He did manage to salvage the season, however, his casino antics essentially marked the beginning of the end of his time at Sunderland.

Another footballer not shy of making headlines, Joey Barton was essentially forced into early retirement due to his love for betting. The former Manchester City, Newcastle United, QPR and Burnley midfielder was banned from playing football for 18-months in 2017 for placing bets on over 1,200 football matches throughout the course of a decade.

Many of the matches that Barton had bet on were ones he was playing in himself, which of course is a big no-no as players in England's top eight tiers are banned from betting on football as not to encourage match-fixing.

Following his ban Barton argued strongly for betting rules to be relaxed, as he stated that 50% of professional footballers bet on matches, he said: "I think culturally betting is acceptable. There's nothing wrong with betting if it's controlled - it's when it becomes out of control and people bet beyond their means."

Former Newcastle United, Cardiff City, Sunderland and Ipswich striker Michael Chopra was one of the first Premier League stars to really hit the headlines for his excessive gambling problems back in the mid to late 2000s. The Geordie frontman revealed that he would gamble up to £30,000 in cash with other players on the team bus en-route to matches while he was still a teenager.

Such was the extent of his gambling addiction that in 2011 towards the back-end of his career, his then club Ipswich Town had to give Chopra £250,000 to pay off shady creditors who had shown up at the club's training ground demanding money.

Despite numerous spells in rehabilitation for his gambling problems, Chopra repeatedly found himself in trouble having been to court after he and his father were accused of being part of a high-profile cocaine ring.

Just a year later Chopra was handed a 10-year ban from Horse Racing by the British Horseracing Authority after an investigation found him guilty of "suspicious betting activity" in which Chopra and three others were betting on horses to lose.

There aren't many people known for betting extensively on cricket, but former Bayern Munich, Manchester City and Liverpool midfielder Dietmar Hamann shockingly revealed in his 2012 autobiography that he'd fallen into a deep hole of gambling during his career.

The German world-cup finalist revealed that he once lost just shy of £300,000 in a single night betting on South Africa vs Australia in a Test match.

His spread-bets saw him win £2,800 for every run Australia scored over 340, but for every run under he lost the same amount of money. That night Australia collapsed for 237, costing him a total of £288,400.

Looking back on the experience, Hamann said: “Every wicket felt like a stab in the heart. By the end of the night I felt like I had been scalped. The next day when I looked at the mess that was me in the mirror I said, ‘Didi, things have got to change."